In an open letter filled with obscenities and threats of physical violence, a prominent leader in Turkey's mafia accused Kemal Kilicdaroglu of treason in concert with Kurdish militants and foreign powers. 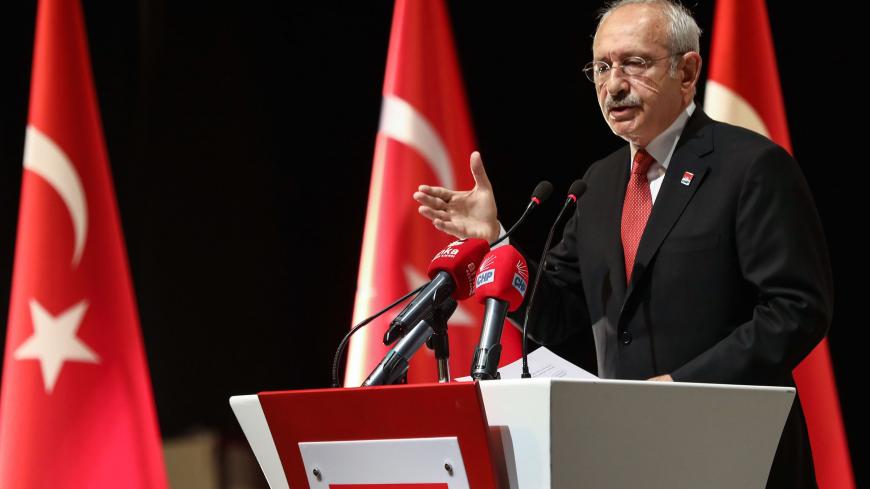 Turkey’s main opposition leader, Kemal Kilicdaroglu, pressed charges with the Istanbul chief prosecutor’s office against a notorious Turkish mafia boss Nov. 18 after he openly threatened him in a letter he shared via Twitter triggering uproar. Kilicdaroglu’s lawyer said the four-page diatribe handwritten and signed by Alaattin Cakici posed a direct threat to his client, who is the leader of the pro-secular Republican People’s Party (CHP).

In the letter, dated Nov. 17 and peppered with obscenities and threats of physical violence, Cakici accused Kilicdaroglu of treason in concert with Kurdish militants and foreign powers. “Be sensible,” he warned, using an expression that is commonly used by Turkish gangsters to intimidate their victims. Cakici’s ire was sparked by Kilicdaroglu’s suggestion in a speech to the parliament the same day that the mobster had been recently freed from prison thanks to pressure on Turkish President Recep Tayyip Erdogan from his far-right nationalist partner Devlet Bahceli, while thousands of prisoners of conscience continue to rot in Turkish jails.

Cakici boasts close ties to Bahceli: The nationalist leader visited Cakici when he fell ill in jail in 2018 and met with him following his release in April this year under a controversial amnesty law that was pushed by his Nationalist Action Party (MHP). Bahceli took to Twitter to defend Cakici against Kilicdaroglu’s “collaborators” who he claimed were trying to smear him, saying that he and the mob leader believed in the same cause

His threats against Kilicdaroglu have been greeted with silence by Erdogan and members of his ruling Justice and Development Party. Their apparent indifference flies in the face of Erdogan’s recent pledges, which have been echoed by his justice minister, for sweeping economic and judicial reforms that are meant to restore investor confidence in Turkey’s battered economy.

“The optimists who wanted to give Erdogan the benefit of the doubt following his promise of legal reform must now realize that this was yet another empty promise of his,” noted Aykan Erdemir, a former CHP parliamentarian who heads the Turkey program at the Foundation for Defense of Democracies, a Washington-based think tank. “Turkish authorities continue to prosecute legitimate expressions of dissent while offering impunity to threats hurled by mob bosses and vigilantes. The Erdogan government is too intimately involved with a long list of criminal and corrupt figures to be able to afford even the semblance of rule of law and due process,” he added in emailed comments to Al-Monitor.

Cakici, whose rap sheet includes running armed gangs and ordering the murder of his ex-wife on a Turkish ski slope, has dominated Turkey’s underworld for the better part of four decades. He is also associated with the Gray Wolves, the ultranationalist outfit that operated as the MHP’s youth arm in street battles with leftists in the 1970s that left thousands dead. It was recently banned in France for its violent attacks against ethnic Armenians there. Cakici was jailed after the 1980 military coup over his role in the murders of 41 leftists.

His most recent spell behind bars for the murder of his ex-wife, whose father was also a notorious mobster, began in 2004 when he was caught in Austria carrying a special service passport under the name of a former intelligence chief. Turkish officials have confirmed that Cakici — operating under the code name “Atilla” — was used by the state for hit jobs against its foreign and domestic enemies. These included Armenian militants who assassinated at least 36 Turkish diplomats between 1974 and 1991, as well as Kurds. While the state’s relations with underworld figures like Cakici are dressed up as patriotism, they have benefited a succession of rogue members of the security apparatus involved in the drugs and weapons trade. Erdogan came to power in 2002 vowing to eradicate the so-called deep state but has ended up in league with it, critics say.

Erdogan’s alliance with Bahceli, cemented in the wake of the failed 2016 coup, has clearly emboldened the likes of Cakici, who has taken potshots at the Turkish president as well.

Ryan Gingeras, author of "Heroin, Organized Crime and the Making of Modern Turkey" and professor of national security affairs at the Naval Postgraduate School in Monterey, said, “I think it is safe to assume Cakici does believe he can get away with threatening Kilicdaroglu because of his ties to MHP and weakness of the justice system.” In emailed comments to Al-Monitor, he added, “One may also say it's a product of 'celebrity license.' This is who he is and it's precisely why he's famous. So yes, it again affirms that the Turkish criminal justice system is choosey when it comes to who is prosecuted for clear infractions. It demonstrates the power of the Turkish right and the continued relevance of right-wing toughs in contemporary history.”

But it may not be all plain sailing for Cakici. An Istanbul court slapped him last month with 17 years for a catalog of crimes including the attempted murder of a relative. An appeals court will have the final say on the case.