The outgoing president's inquiry has raised concerns of a last-minute strike that could ignite a messy conflict. 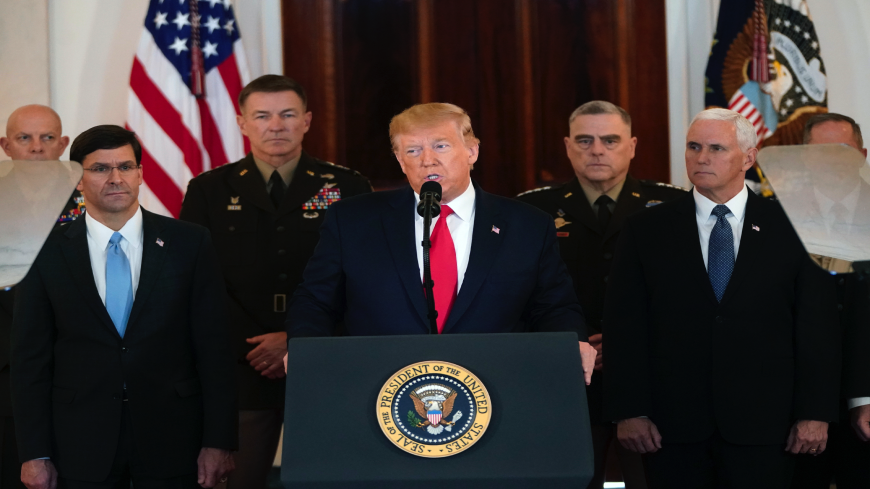 US President Donald Trump speaks from the White House on Jan. 08, 2020, in Washington, DC. During his remarks, Trump addressed the Iranian missile attacks that took place in Iraq and said, “As long as I am president of the United States, Iran will never be allowed to have a nuclear weapon.” - Win McNamee/Getty Images

During an Oval Office meeting on Thursday, senior advisers, including newly appointed acting Defense Secretary Christopher Miller, Chairman of the Joint Chiefs of Staff Gen. Mark Milley, Vice President Mike Pence and Secretary of State Mike Pompeo, reportedly talked the president out of the idea by warning of the risk of sparking a wider conflict with Iran. The discussion was reported by the New York Times.

The president has long vowed to disentangle the United States from military conflicts abroad and appears eager to cement that legacy before leaving office in January. At the same time, his administration maintained a firm stance against Iran, which has been accused by the United States of exporting weapons technology and by European Union states of hiding suspected nuclear activity.

The news comes just over a week after the White House purged much of the Pentagon’s top civilian leadership and installed figures seen as Trump loyalists, leading to concerns that a bulwark in the chain of command against the president’s impulsive foreign policy orders had been removed.

Prior to the 2015 international nuclear agreement with Tehran, Israeli officials pushed their American counterparts to militarily support a strike on Iran’s nuclear sites, raising speculation among some officials that the request could be renewed during Trump’s final days in office.

An Israeli operation to strike Iranian nuclear sites would require significant US air power to knock out Iran’s air defenses and would risk igniting a serious conflict, a former senior US official told Al-Monitor.

“It would be a massive preparatory effort to ensure they can even get to the target. It would be casualty-producing,” the former official said. “You would require so many American military assets that you might as well just call it our operation. And there would be no guarantee of success.”

Trump’s decision to abandon the nuclear deal in 2018 has resulted in Iran increasing its uranium stockpile to roughly a dozen times the limit permitted by the agreement, the International Atomic Energy Agency (IAEA) reported last week.

According to The New York Times, Trump inquired about the possibility of a strike one day after the IAEA released the report, which suggested Iran had collected enough low-enriched uranium to eventually produce two nuclear weapons, but that the uranium would require several months of additional enrichment before reaching levels required for use in a nuclear weapon.

The IAEA has also accused Iran of obstructing inspection of sites suspected of having housed nuclear research and processing.

Iran’s government renewed construction at Natanz after a fire badly damaged the facility in July. Iran called the fire “sabotage” and vowed retaliation.

A spokesman for the government in Tehran vowed his country would fight back against any military action from the United States. “The Iranian response to any American move would be overwhelming and powerful,” said Ali Rabiei on Tuesday, according to the state-run Al-Alam News Network.