Saudi Arabia and the UAE should reach out to the Biden team now, creating a back channel to promote both Gulf and US security interests in the final months of Trump's presidency. 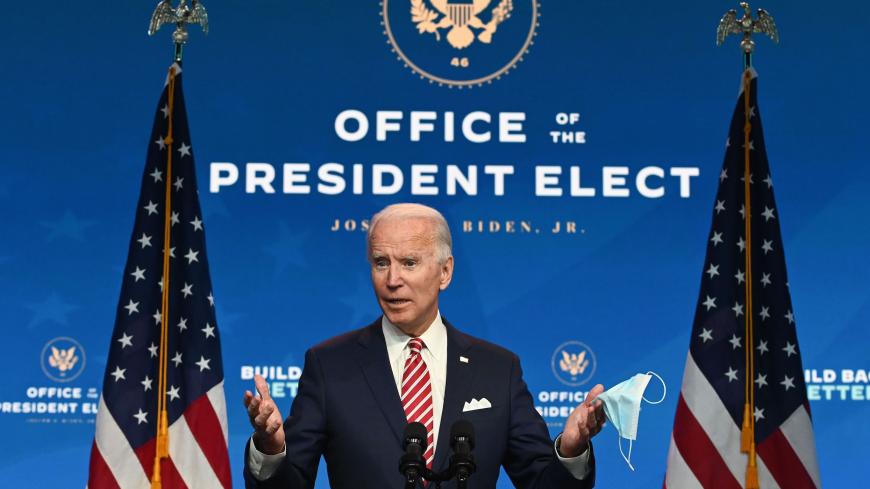 US President-elect Joe Biden holds a face mask as he answers questions about COVID-19 from the press at The Queen in Wilmington, Delaware, on Nov. 16, 2020.

To avoid war, President-elect Joe Biden's administration in waiting may need to start talking. In December 2016, there was a breach of protocol in New York when members of the incoming Donald Trump administration, including then-President-elect Trump, met with Emirati leadership in Trump Tower. It caused a bit of a stir and began a process of deinstitutionalization of foreign policy within the Trump administration that lasts to this day. Before Jared Kushner and Saudi Crown Prince Mohammed bin Salman were WhatsApp buddies, there was the quiet outreach by Gulf Arab monarchies to get a read on Trump and cement open channels of communication outside of the halls of the State Department or National Security Council. To facilitate those channels, especially before the inauguration, was bad policy and bad precedent. But it may be exactly what needs to happen again, with better intentions under extreme circumstances.

We are in a strange moment in American history when a sitting president who has lost reelection refuses to acknowledge his defeat and at the same time has two months to, at the least, throw sand in the gears of his successor's administration, and at the worst, propel the United States into needless conflict. Attacking Iran in the twilight of his presidency would wreak havoc on the Biden administration's objective of re-entering the JCPOA (Joint Comprehensive Plan of Action), but it would also wreck the potential growth and recovery of the Middle East from its long-term structural economic malaise worsened by the current impact of the pandemic and the collapse of oil prices. A regional war with Iran does nothing for the future stability and prosperity of the Middle East. In fact, it would usher in a lost generation, throwing away its chance at a demographic dividend, arresting a young, relatively healthy and decently educated population and condemning them to poverty, immobility and silence — perhaps the greatest missed opportunity since the discovery of oil.

There is a decision point now for those states that seek to be regional powers and leaders of the new Middle East. Saudi Arabia faces the sharpest dilemma: Insecure in how the Biden administration will treat it, the propensity of the crown prince will be for action rather than process. But this is the wrong approach. Saudi Arabia needs to reach out to the Biden team now, and the Biden administration needs to make its intentions very clear, and very early. We need a back channel. And for the United Arab Emirates, they are positioned to survive Trump and appease Biden, but they have the most to lose in a regional conflagration. The UAE would be devastated by regional conflict in its economic recovery efforts, dependent on all of the same sectors most sensitive to the COVID-19 pandemic: transport, logistics, tourism and real estate. The UAE also risks a meltdown next door, one in which Saudi Arabia risks a poor military performance and lack of combat coordination, something they have seen before in Yemen.

Normalization between some Arab states and Israel is positive, but it is still early, and to test these ties with conflict now could devastate a range of other potential areas of cooperation that better serve their populations. There is the easy choice of war and confrontation with Iran, or there is the choice of the actual hard work of diplomacy, governance, political liberalization and economic reform. There may be some short-term gains in the easy way out: Oil prices might spike if missiles fly over the Persian Gulf, but global supply is so plentiful that it will be short-lived. There may be some satisfaction in an assault on the regime of the Islamic Republic of Iran, but they won't go down without a nasty fight that will see a new decade of dirty wars proliferate through Lebanon, Yemen, and in cafes and transport hubs around the region and beyond. A war with Iran will only deepen oil dependency and internal repression and kill the economic diversification agenda.

Trump can offer a final gift to Saudi Arabia in the designation of the Houthis as terrorists, emphasizing the power of Iran in its drip-feed of a regional weapons bazaar, rather than trying to box in a desperate insurgency with no real means of governance other than fear and bribery. The Houthis are thugs and thieves, but they are Yemenis. And a designation now would kill the peace process in Yemen while allowing Saudi Arabia a green light to continue its relentless bombing campaigns. But it will only lengthen the conflict on the Saudi border and increase its domestic security risk, further limiting its own goals of attracting foreign investors and tourists, not to mention the security of its exports and ports in the Red Sea corridor.

In the two months left before Biden is inaugurated, Secretary of State Mike Pompeo is the new John Bolton — hawkish and rejecting the JCPOA as "silly" as much for ideological opposition to the Islamic Republic as for the sake of his political future. He might want to start a war with Iran in partnership with Israel, the UAE and Saudi Arabia if he can swing it, to build his credentials among evangelicals and the anti-Iran constituency, building his platform to run for office in 2024 without any responsibility for the cleanup of the mess he makes now. While Pompeo may have been a voice of restraint in Trump's most recent consideration of attack on Iran, he too has established conditions under which an attack would be justified, such as the death of an American. The risk of provoking Iran is as high as an outright attack, whether in the form of a military strike, targeted assassinations or sabotage. The temptation of legacy-building along with a slew of leadership vacuums across the US security establishment will be difficult to decipher from the outside, especially in the view from the Gulf.

For the Gulf Arab states, namely Saudi Arabia and the UAE, this is the time to talk. This is the time to hear very clearly from the incoming administration what it seeks in the region and how it will proceed from day 1. The words "withdrawal" and "pivot" should not be part of that conversation. Partnership, a seat at the negotiation table and a commitment to regional security, including a reiteration of the Carter Doctrine, would be the message Gulf Arab leaders need to hear and that the incoming Biden administration should be able to offer. And they can hear that privately.