A year after Operation Peace Spring, the residents in the areas under the control of the Kurdish-led Syrian Democratic Forces fear a new Turkish operation. 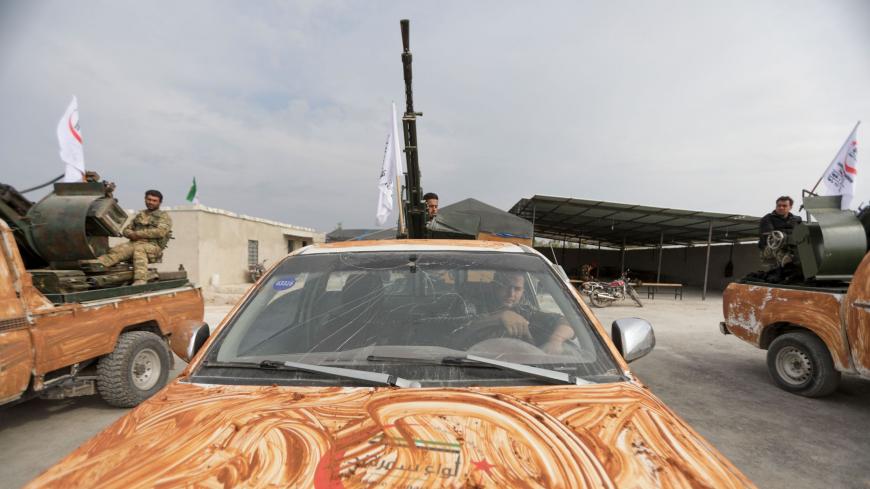 Turkish-backed Syrian rebel fighters, mask-clad due to the COVID-19 pandemic, take part in a military parade marking the graduation of a new batch of cadets and attended by officials from the Turkey-backed opposition in the town of Jindayris, in the Afrin region of the northern Syrian rebel-held province of Aleppo, on Nov. 14, 2020. - BAKR ALKASEM/AFP via Getty Images

For weeks, Turkey has been bombing areas in northeastern Syria and fighting by proxy through the Syrian opposition groups loyal to it against the Kurdish-led Syrian Democratic Forces (SDF) in Ain Issa, Manbij and the Aleppo countryside. The latter areas are under the control of the SDF, backed by the US-led coalition against the Islamic State in Syria.

Ilham Ahmed, head of the Syrian Democratic Council’s executive committee, the SDF’s political wing, reassured civilians that no new Turkish operation will strike their areas. Ahmed’s statement came during a press interview on Oct. 10, one year after Turkey's Operation Peace Spring against the SDF on Oct. 9, 2019, killed and displaced many civilians.

However, the residents are apprehensive. Nubar Zaven is from the city of Tell Abyad in northeastern Syria and now lives in Armenia. After a military squad from the Syrian opposition army seized his property in 2019, he had to move with his family to Hasakah. Zaven later made it to Armenia, but his parents and his two sisters were unable to travel and are still stuck in Hasakah. He told Al-Monitor that he and his family fear a new Turkish occupation of northern Syria.

“Turkish artillery never stopped bombing populated villages in Manbij and Ain Issa throughout the entire month [of October]. This indicates that Turkey will carry out its threats and occupy the entire Syrian border strip, as it did last year,” Zaven added.

Ahmed said during her interview that the decision of the US presidency to extend the special national emergency related to Syria for a year would curb any new Turkish invasion of northern Syria, and she noted that US support for development projects east of the Euphrates will guarantee this protection.

An Oct. 8 White House statement read, “The situation in and in relation to Syria, and in particular the actions by the Government of Turkey to conduct a military offensive into northeast Syria, undermines the campaign to defeat the Islamic State of Iraq and Syria, or ISIS, endangers civilians, and further threatens to undermine the peace, security, and stability in the region, and continues to pose an unusual and extraordinary threat to the national security and foreign policy of the United States. For this reason, the national emergency declared on October 14, 2019, must continue in effect beyond October 14, 2020.”

Meanwhile, local media sources report an escalation of Turkish bombing on the villages of Khalidiya and Hoshan in the western countryside of Tell Abyad and the vicinity of Ain Issa as well as the ongoing targeting of areas in Mount Qaraquzak in the eastern countryside of Aleppo and villages in the Shahba area of the Aleppo countryside.

On Nov. 1, the village of Bir Khatik in the western Tell Abyad countryside was bombed.

Mustafa Khalil, who works as a photojournalist for several Arab outlets in the Shahba area, fears a Turkish military operation will target new areas in northern Syria. He told Al-Monitor he believes that Tell Rifaat, Manbij and Ain Issa are top Turkish priorities, pointing out that they have been repeatedly bombed by Turkish forces, killing dozens of civilians.

Residents of these areas fear a new occupation and more human rights violations, as happened in Afrin during Operation Peace Spring.

“The population’s concerns increased after the Turkish military withdrew from several points, the most important of which was in Morek, its largest military [observation] post in the Hama countryside, and it dismantled its equipment there on Oct. 18. The people interpreted this as a Turkish-Russian deal whereby Russia allows Turkey to occupy Tell Rifaat, Manbij and Ain Issa in exchange for a Turkish withdrawal from Morek and several other military points, paving the way for the Syrian regime to enter those areas and control them,” Khalil noted.

Turkish President Recep Tayyip Erdogan has repeatedly threatened a military attack against the SDF areas, SDF officer Sarukhbun Khabat told Al-Monitor, “The disastrous economic conditions in Turkey and the collapse of its currency due to political issues stemming from Erdogan’s policies against regional [countries] pushed him to direct his people’s attention from the internal Turkish mess toward battles and wars outside Turkey and make them believe that he will rebuild the glories of the Ottoman Empire, which put him at odds with many Arab and foreign countries.”

Khabat added, “Erdogan threatens our regions periodically as well as other countries, while his country suffers a stifling economic crisis in light of the outbreak of COVID-19 and the exposure of the Turkish city of Izmir to a devastating earthquake that killed and injured many civilians, in addition to the dozens of buildings that collapsed. All this will push the Turkish people, who are already hungry, to take to the streets and demand Erdogan’s ousting.”