The senators want the president to reverse the Clinton-era customs policy before he leaves office in January. 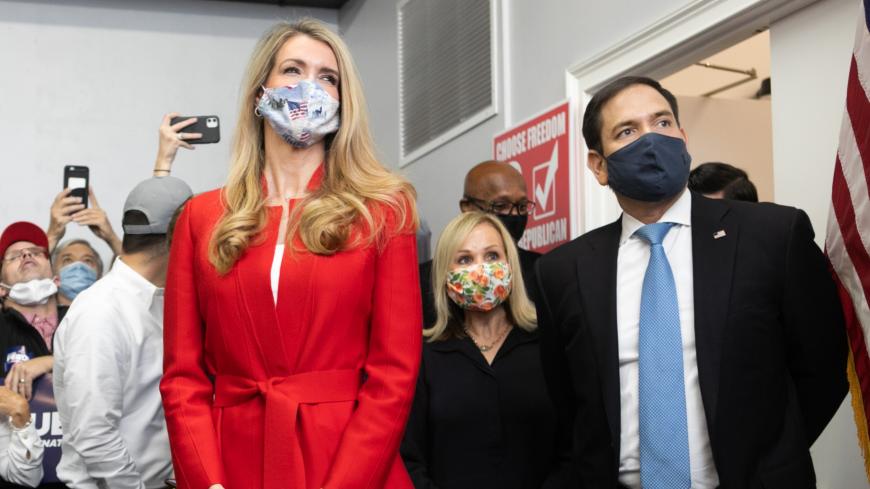 Republican Sens. Kelly Loeffler (L) of Georgia and Marco Rubio (R) of Florida stand during a Save Our Majority campaign rally on Nov. 11, 2020, in Marietta, Georgia. Loeffler and Georgia Sen. David Perdue are both in Jan. 5 runoffs against Democratic US Senate candidates Raphael Warnock and Jon Ossoff, respectively. - Jessica McGowan/Getty Images

A group of Republican senators is demanding the Trump administration label goods made in the West Bank as “Made in Israel.”

On Monday, Sens. Tom Cotton of Arkansas, Marco Rubio of Florida, Ted Cruz of Texas and Kelly Loeffler of Georgia wrote a letter to US President Donald Trump. In it, they said US customs policy should stipulate that products made in the Palestinian territory of the West Bank should be labeled as “Made in Israel.” As of now, such products are labeled “Made in West Bank”; this policy dates back to the administration of President Bill Clinton.

The senators said Trump should continue to support Israel with the policy change. They also want to strike a blow to the boycott, divestment and sanctions (BDS) movement, which supports various economic boycotts against Israel over its treatment of Palestinians.

“Your administration should continue its string of pro-Israel policy changes by undoing these misguided Clinton-era guidelines,” wrote the senators. “This decision would be yet another achievement by your administration that would support Israel and would push back against anti-Semitism and the BDS movement.”

Israel captured the West Bank from Jordan during the 1967 war. Most of the West Bank's population of nearly 3 million is Palestinian, though several hundred thousand Jewish Israeli settlers live there. International law regards the territory as occupied by Israel and Palestinians envision it as a major part of a future independent state.

The Clinton administration required that West Bank products be labeled as “Made in West Bank” to help the Palestinian economy at the time.

The timing of the letter could be related to Trump only having a few weeks left in office. Former Vice President Joe Biden has been widely projected as the winner of the 2020 presidential election and has already started his transition plans, despite Trump’s refusal to concede.

Loeffler is also running to keep her seat in a January runoff election, and the measure could rally support among evangelical Christian voters.

Cotton, Cruz and Rubio are all possible contenders for the Republican nomination in the 2024 presidential election.

The White House did not immediately respond to Al-Monitor's request for comment and it is unclear whether the president will change US customs policy in this regard. Trump has enacted several pro-Israel policies, including recognizing Jerusalem as Israel’s capital.