Christians United for Israel slammed Georgia Democrat Raphael Warnock over a 2018 sermon he gave on the opening of the US Embassy in Jerusalem, but others have defended the candidate for a US Senate seat. 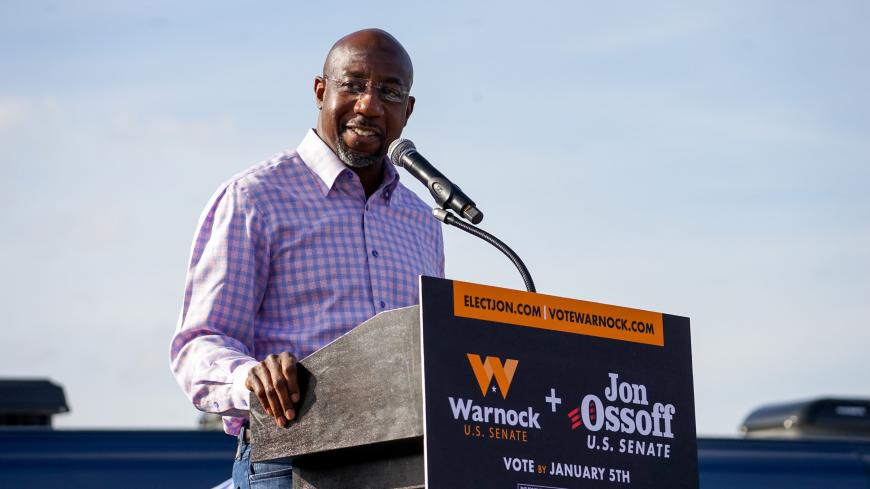 Democratic US Senate candidate Rev. Raphael Warnock of Atlanta speaks to supporters at a rally on Dec. 19, 2020, in his hometown of Savannah, Georgia. Warnock and Jon Ossoff are in a tight Jan. 5 runoff election against Republican incumbents David Perdue and Kelly Loeffler. - Megan Varner/Getty Images

A pro-Israel group has released an attack ad against the Rev. Raphael Warnock ahead of the Democratic candidate's crucial January US Senate runoff in Georgia.

CUFI Action Fund, an organization related to the pro-Israel group Christians United for Israel, released on Dec. 23 a video accusing Warnock of “lying about the Jewish state.”

Warnock, a Baptist minister, faces Republican Sen. Kelly Loeffler in the Jan. 5 election. A runoff for Georgia’s other US Senate seat will take place the same day. An average of recent polls shows Warnock with a lead of just 0.5 percentage points over Loeffler — essentially a dead heat.

The CUFI video referenced a sermon Warnock gave in 2018 where he spoke about the opening of the US Embassy in Jerusalem and criticized evangelical Christian pastors who attended the event.

“Mealy-mouthed evangelical preachers,” Warnock said, “are responsible for the mess we found ourselves in, both there and here.”

At the time of the embassy’s opening, Palestinians in the Gaza Strip launched kites carrying Molotov cocktails toward Israel and threw stones at Israeli soldiers. The Israeli military responded by shooting at the Palestinians, killing several.

Warnock referenced the protests in his speech, saying they were largely nonviolent. “Young Palestinian sisters and brothers who are struggling for their very lives … stood up in a nonviolent protest,” he said.

Warnock acknowledged violence at the protests, but defended that by making an apparent reference to protests against police killings of Black Americans in the United States.

“We know what it’s like to stand up and have a peaceful demonstration and have the media focus on a few violent uprisings,” said Warnock. “We saw the government of Israel shoot down unarmed Palestinian sisters and brothers like birds of prey.”

Black Lives Matter and leftist groups expressed solidarity with the Palestinian cause during anti-police protests in the United States this year.

In contrast with his fiery rhetoric, Warnock called for peace and self-determination for both Israelis and Palestinians in the sermon.

“We need a two-state solution,” he said. “We’re all God’s children.”

The Christians United for Israel ad includes short soundbites from the speech without context, including the “birds of prey” comment.

The sermon was first reported by Jewish Insider. A campaign spokesperson told the outlet that Warnock is a “staunch ally and supporter of Israel” and accused his opponents of trying to “misrepresent” him.

Warnock has received some criticism from Jewish Americans for his comments on Israel. On the other hand, he has also been endorsed by the Jewish organization J Street, which supports “pro-Israel, pro-peace” policies on the Israeli-Palestinian conflict.

Loeffler is a staunch supporter of Israel. In November, she and three other senators urged the Trump administration to label products made in Israeli West Bank settlements as “Made in Israel.” The State Department later announced it would make this policy change.

The Loeffler-Warnock election is one of many where Israel has been an issue this year. In a New York Democratic primary in July, pro-Palestine progressive Jamaal Bowman defeated Rep. Eliot Engel, the pro-Israel longtime House Foreign Affairs Committee chairman. In a September Democratic primary in Massachusetts, pro-Israel Rep. Richard Neal defeated challenger Alex Morse, a Jewish-American who wanted to condition US aid to Israel.

The Georgia elections will determine which party controls the Senate; this, in turn, could have an impact on the incoming Biden administration’s Middle East policy. The Democrats need to win both seats to have control of the Senate through what would be the deciding vote of Democrat Kamala Harris once she becomes vice president; as it stands now, the Republicans won 50 seats Nov. 3 and the Democrats and their allies 48.

Republicans and some Democrats are expected to disagree with Biden’s attempts to reenter the Iran nuclear deal. Some Republicans may also seek to block Biden’s Cabinet nominations.