US presidential candidates are offering substantive differences when it comes to Israel policy. 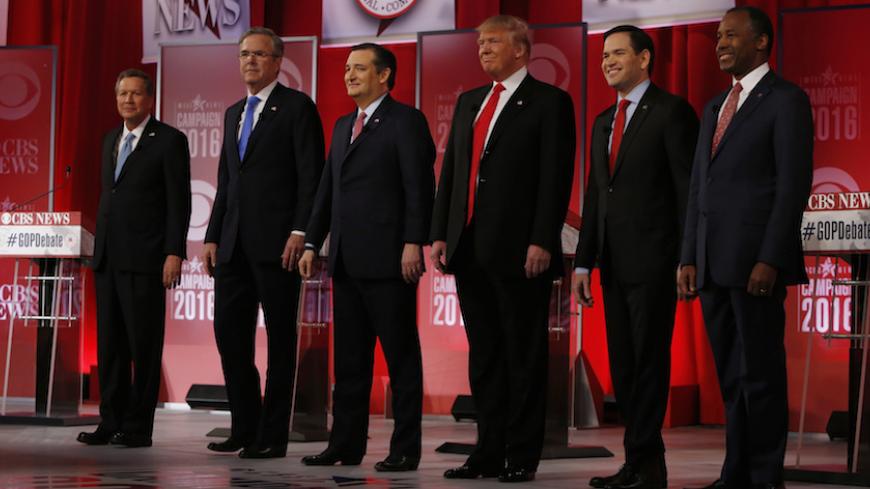 Two of the top Republican candidates for president favor recognizing West Bank settlements as part of Israel, a sharp break with decades of US policy that could either revive or bury the moribund Oslo peace process.

The hawkish stance is one of several controversial proposals floated during the 2016 race, which has moved far beyond the usual bipartisan boilerplate support for Israel. The debate underscores the increasingly polarized nature of US relations with Israel over the past few years, even if the follow-through from campaign rhetoric to presidential order remains an open question.

Sens. Ted Cruz, R-Texas, and Marco Rubio, R-Fla., this month were the first to co-sponsor legislation that would allow goods from the West Bank and Gaza to be labeled as “Made in Israel” in response to the Obama administration’s recent reaffirmation of long-standing US policy on the matter. The bill from Sen. Tom Cotton, R-Ark., is the most transparent attempt to date to conflate settlements with Israel, an idea that has been gaining traction in Congress over the past year.

Cruz, like Rubio, has referred to the disputed West Bank territories by the biblical Hebrew names Judea and Samaria and argued that the United States should not treat the Israelis and the Palestinians as morally equivalent. Instead, Coates said, the US should empower Israel and allow it to deal with the Palestinians on its own terms, if they ever decide they want to make peace.

“As the Oslo process has broken down, I think [Cruz’s] view is that it is not beholden on the Israelis to carry that on by themselves absent committed Palestinian participation,” she said. “His feeling is that this is an issue for the Israelis to settle internally, and not one that should be subject to international arbitration. That’s why he’s been so aggressive on the labeling issue.”

Predictably, the Palestinians have an opposite viewpoint.

Cotton’s bill, the Palestinian Liberation Organization’s delegation to Washington said in a statement, shows a “complete disregard of decades of longstanding Democratic and Republican policy to separate Israel from its illegal settlement enterprise.”

“Legitimizing Israeli settlements further strengthens radical settlers, incites them to commit more violence against Palestinians and prolongs the almost half-century old Israeli brutal military occupation of the Palestinian People,” the statement says. “The General Delegation of the PLO to the United States rejects all attempts to conflate Israel with Occupied Palestinian land that aim [to] destroy the possibility of the two state solution and the future viability of a Palestinian state.”

Sanders, the only major Jewish candidate, was the first US senator to announce that he would skip Prime Minister Benjamin Netanyahu’s address to Congress lambasting nuclear talks with Iran last year. He has been a longtime champion of a two-state solution, even if some liberals want him to more explicitly state his opposition to continued settlement expansion.

Clinton, for her part, has a long track record of blaming settlement construction for harming the peace process.

In 2014, she told CNN that her “biggest complaint” with Netanyahu’s government as secretary of state was its settlement expansion.

“The continuing settlements, which have been denounced by successive American administrations on both sides of the aisle, are clearly a terrible signal to send if, at the same time, you claim you're looking for a two-state solution,” she said at the time.

Clinton’s close ties with former ambassador to Israel and peace envoy Martin Indyk are also well documented. Indyk has largely blamed Netanyahu for the breakdown of Secretary of State John Kerry’s recent efforts to restart peace talks, but he was warning Clinton about the “self-defeating” Israeli leader as far back as 2010, according to Clinton emails that were recently made public by court order.

Ironically, Donald Trump, the current Republican front-runner, seems closer to the Democrats than to his main Republican rivals on the issue.

In a December interview with The Associated Press, the real estate mogul called Israeli settlement construction a "huge sticking point" in peace negotiations.

“A lot will have to do with Israel and whether or not Israel wants to make the deal — whether or not Israel's willing to sacrifice certain things," Trump told the wire service. "They may not be, and I understand that, and I'm OK with that. But then you're just not going to have a deal.”

That same week, he got booed at the Republican Jewish Coalition when he declined to take a stance on whether Jerusalem is the capital of Israel. Congress passed a law requiring the US Embassy to be relocated there from Tel Aviv in 1995, but US presidents since then have waived the law so as to avoid undermining peace talks that are supposed to determine the exact boundaries of the Israeli and Palestinian states.

This month, Trump appeared to have a change of heart. He now says he is 100% behind moving the US Embassy to Jerusalem.

Former Florida Gov. Jeb Bush, who is trailing in the polls, has also said he would like to move the embassy. Former Ohio Gov. John Kasich, by contrast, has not joined that chorus.

Aaron David Miller, the vice president for New Initiatives at the Woodrow Wilson International Center for Scholars and a former adviser to both parties on Arab-Israeli negotiations, said the proposal from Cruz and Rubio would mark a sea change in US policy. But he questioned whether it would ever be carried out, even if one of them were to win the presidency.

“If an American president were to say … we have no problem with the Israelis incorporating these settlements into the West Bank and Gaza or, frankly, annexing the West Bank or Jerusalem, it would constitute a dramatic, transformative change in American policy, probably rule out the United States as any kind of negotiator … and would have a transformative impact on shutting down what remains of an Arab-Israeli negotiation,” he said. “But there are all kinds of factors and issues that would intrude, impede and prevent that from happening, even in a Cruz or Rubio presidency.”