Will Arab-American voters rally around Clinton?

Arab-Americans tend to vote Democratic in presidential elections, but will the community coalesce around Hillary Clinton despite the attraction of Bernie Sanders’ views on the Middle East? 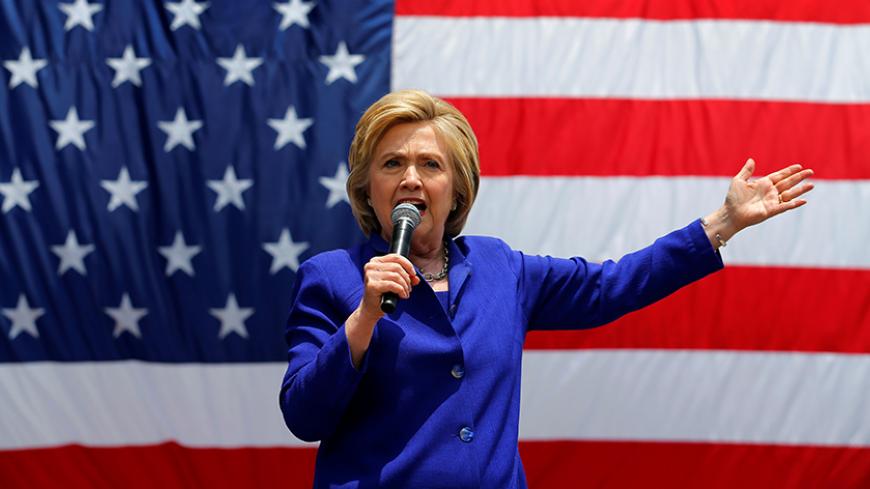 Like many of their compatriots, Arab-Americans are confronting their presidential election choices this year with considerable ambivalence.

Republicans have been repelled by presumptive Republican nominee Donald Trump’s vow to temporarily ban all Muslim immigration and his racist remarks about other ethnic minorities.

Many Arab-American Democrats, meanwhile, gravitated toward the candidacy of Vermont Sen. Bernie Sanders, who made Palestinian rights and aversion to US military intervention in the Middle East pillars of his foreign policy. However, Sanders on June 7 lost his chance for the nomination to former Secretary of State Hillary Clinton.

“I’m reserving judgment to see how things develop,” she told Al-Monitor in an interview.

Hudome, a former counselor to Arab-American Sen. Spencer Abraham, R-Mich., has “worked on every campaign” for Republicans since Ronald Reagan. She said she had supported New Jersey Gov. Chris Christie for the nomination this year and would back a Trump-Christie ticket or a ticket of Trump and Tennessee Sen. Bob Corker, the chairman of the Senate Foreign Relations Committee.

Hudome said she could also envision writing in a candidate.

Another Arab-American who spoke to Al-Monitor on condition of anonymity said voters might choose Green Party candidate Jill Stein, Libertarian Gary Johnson or simply sit this election out.

Clinton, she noted, had adopted different tones on key issues such as the Arab-Israeli dispute over her long career. “She says one thing to AIPAC,” Hudome said, referring to Clinton’s staunch support of Israel before the American Israel Public Affairs Committee this year, “but as first lady did something totally different” when she embraced the wife of Palestinian leader Yasser Arafat.

Clinton sought to ingratiate herself with Jewish voters when she ran for senator from New York in 2000 but “read the riot act” to Israeli Prime Minister Benjamin Netanyahu as secretary of state, Hudome said.

“Who is the real Hillary Clinton?” Hudome asked. Hudome, whose father is Egyptian, also criticized Clinton’s record on Egypt and Libya.

A column June 8 on a popular Arab-American website recalled that Clinton in 2000 returned $51,000 in Senate campaign donations from the two Muslim groups that were falsely smeared as advocating anti-Israel terrorism. The column went on to note that Clinton has reached out to Arab-Americans this year but also underlined her opposition to the boycott, sanctions and divestment movement, which seeks to pressure Israel to stop expanding settlements on the West Bank.

Arab-Americans point out that it is difficult to generalize about their community because of its diverse background. A majority is Christian, the descendants of those who fled the Levant a century ago and came to the United States before a window on immigration shut in 1924.

While most back the Palestinians, there are differing views over Syria, on which Clinton has had a more pro-intervention stance than Trump or Sanders.

Ed Gabriel, a Lebanese-American and former US ambassador to Morocco who is assisting Clinton in reaching out to Arab-Americans, acknowledged in an interview with Al-Monitor, “There is a real split in the community between those who advocate intervention and non-intervention in Syria. I am a strong proponent of her position that we have to stand up to [Syrian President Bashar al-] Assad to force him to the negotiating table.”

However, Gabriel said that Arab-Americans, like other Americans, would vote mostly on domestic issues, particularly “their status in life and civil liberties.” Clinton, he noted, “has been a powerful voice against xenophobia,” and he predicted that Sanders’ supporters would eventually coalesce around Clinton in order to defeat Trump.

Jim Zogby, co-founder and president of the Arab American Institute, was named by Sanders to the Democratic Party’s platform committee and is pushing for language on the Arab-Israeli dispute that is more supportive of Palestinian rights. Asked by Al-Monitor when and whether Sanders would formally concede and campaign for Clinton, Zogby said he didn’t know. “We’ll see if he decides to hold out until his conditions are met, not just for the platform but for structural changes” in how the party chooses its presidential nominees, Zogby said.

In general, Zogby, who is also a veteran pollster, said Arab-Americans are likely to vote Democratic, following a trend that has intensified since 2002. Comparing the community’s attitudes to those of Hispanics and Jewish Americans, Zogby said, “Nothing happened during this primary season to make support for the Republicans expand.”

For those concerned about the Palestinian issue, there has been concern that Clinton would be overly solicitous of Israeli views, in part because of hefty campaign donations from individuals such as Israeli-American billionaire Haim Saban. This is particularly the case among Arab-Americans who support Sanders.

Shibley Telhami, a Palestinian-American pollster and professor at the University of Maryland, told Al-Monitor, “Obviously, Sanders captured the imagination of people looking for an even-handed approach to the Arab-Israeli dispute as well as globalists and cosmopolitans who want to convey empathy to different communities in the US and across the world.”

Still, Telhami, who advised US Mideast envoy George Mitchell during his failed attempt to broker Arab-Israeli peace during President Barack Obama’s first term, said Clinton would have a “better chance at delivering an agreement. … She obviously cares about Israel and is unlikely to be confrontational with Israel. But if you look at her record, she knows the issue better than anyone else, knows the players and is highly respected in the region.”

An Iraqi-American who spoke on condition of anonymity because of concern that his remarks might prejudice his ability to influence the next president, said he was voting for Clinton despite disappointment with the Obama administration’s record on Iraq, including when Clinton was secretary of state.

“I don’t think she ran Iraq policy in the State Department,” he said. He said he was hoping for “a slightly more realistic assessment of American interests in Iraq” under a Clinton administration, one that goes beyond mere tactical concerns about groups such as the Islamic State.

As someone who never voted for a Democrat as president until 2012, he added that he thought many Arab-American Republicans were of the “country club” sort that “no longer exists. It’s like Reagan said when asked why he was no longer a Democrat. He said he didn’t leave the party, the party left him.”

For Hussein Ibish, a Lebanese-American columnist and senior resident scholar at the Arab Gulf States Institute in Washington, the choice this year is clear.

“I’m going to vote for the lady,” Ibish told Al-Monitor. “I find Trump to be threatening, malevolent and dangerous and a textbook case of narcissistic personality disorder.” Clinton, he continued, is “a standard run-of-the-mill establishment politician and compared to Trump, she’s a godsend.”