The Palestinians describe Bilal Rawajba's death as an "extrajudicial execution." 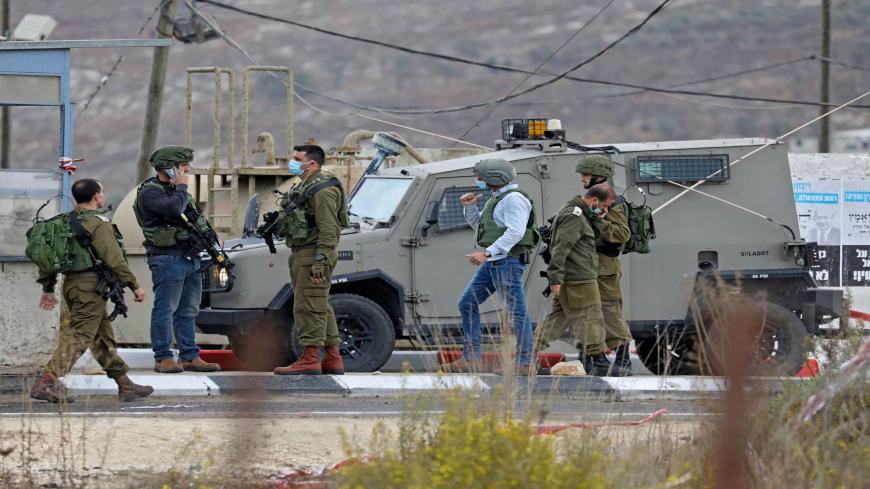 Israeli soldiers gather at a checkpoint near Nablus where a Palestinian who shot at Israeli troops was killed when soldiers returned fire, West Bank, Nov. 4, 2020. - JAAFAR ASHTIYEH/AFP via Getty Images

Israeli soldiers on Wednesday fatally shot a Palestinian motorist in the West Bank city of Nablus who fired in their direction, Israel’s army said.

“Our troops thwarted a shooting attack near the city of Nablus this morning,” the Israel Defense Forces (IDF) said on Twitter Wednesday. “An assailant fired at IDF soldiers at a military post as he drove out of the city.”

The Israeli commander whose soldiers were involved provided more information to The Jerusalem Post, saying the suspect managed to shoot a few rounds.

“He turned left in the roundabout and opened fire towards our post … Two other soldiers who were positioned in a nearby bus stop, noticed the incident and joined the forces in neutralizing the terrorist," Lt. Col. Shahar Barkai told the outlet.

The Palestinian Authority (PA) identified the suspect as Bilal Rawajba, a 29-year-old legal adviser with the PA’s Preventive Security Service. The agency is tasked with maintaining internal security and in the past has cooperated with Israel to do so.

Palestinian President Mahmoud Abbas ended that security cooperation in May over Israel’s planned annexation of large portions of the West Bank, which the Palestinians envision as part of their future independent state. Under the recent normalization agreements with Bahrain and the United Arab Emirates, Israeli Prime Minister Benjamin Netanyahu agreed to suspend annexation.

In a statement Wednesday, the Palestinians described Rawajba’s death as an “extrajudicial execution” and accused Israeli soldiers of preventing ambulance crews from reaching their officer. They also called on the International Criminal Court in The Hague to expedite its probe into alleged war crimes committed in the Palestinian territories.