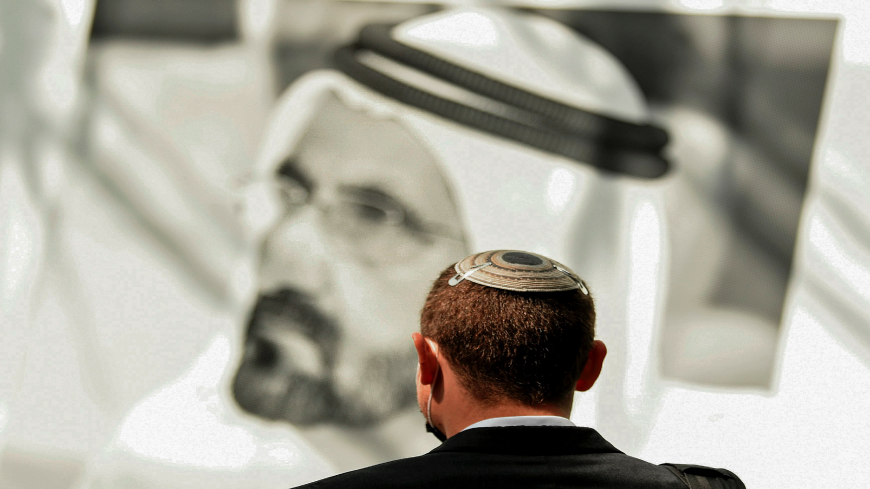 A member of an Israeli high-tech delegation stands in front of a poster of Dubai's ruler Sheikh Mohammed bin Rashid al-Maktoum during a meeting with Emirati counterparts at the headquarters of the Government Accelerators in Dubai on Oct. 27, 2020. Israel's government gave final approval to the normalization of ties with the United Arab Emirates, an official statement said, after lawmakers ratified the pact in early October. - KARIM SAHIB/AFP via Getty Images

The group included members of the Samaria Regional Council, which represents settlers in the northern West Bank. The delegation met with agriculture, pest control and plastic businesses, with the goal of increasing cooperation on water desalination and agronomy in particular, The Associated Press reported.

Israel captured the West Bank, which has a majority Palestinian population, from Jordan in 1967. Most of the international community recognizes the territory as occupied by Israel. Thousands of Jewish Israelis now live in various settlements across the territory.

The Palestinian Authority (PA), which administers parts of the West Bank not controlled by the Israeli military, adamantly opposes the settlements and believes they hinder Palestinian self-determination.

PA officials unsurprisingly condemned the visit, with one saying it was “painful” to see “Arab cooperation” with the settlers, according to the AP.

Israel and the UAE established full relations in September. The UAE was only the third country in the Arab world to recognize Israel, and Bahrain soon followed suit. Since then, there has been a flurry of business deals aimed at fostering economic ties between Israel and the UAE.

Palestinians are steadfast in their opposition to the normalization and believe Arab states should not recognize Israel without recognition of Palestinian statehood. In September, Palestine quit chairing the Arab League after the body declined to condemn the UAE for its deal with Israel.

The UAE has not been deterred by opposition from Palestinians, their allies and pro-Palestinian activists, and it continues to develop its relationship with Israel. The country also recently decided to import wine from the Golan Heights, which angered supporters of anti-Israel boycotts. Israel took the Golan Heights in 1967 from Syria, and international law regards it as Syrian territory — though the United States now recognizes it as Israeli territory.