Iraq's Council of Representatives voted on the electoral law, which, if passed, will put forward the program for early elections scheduled for next June. 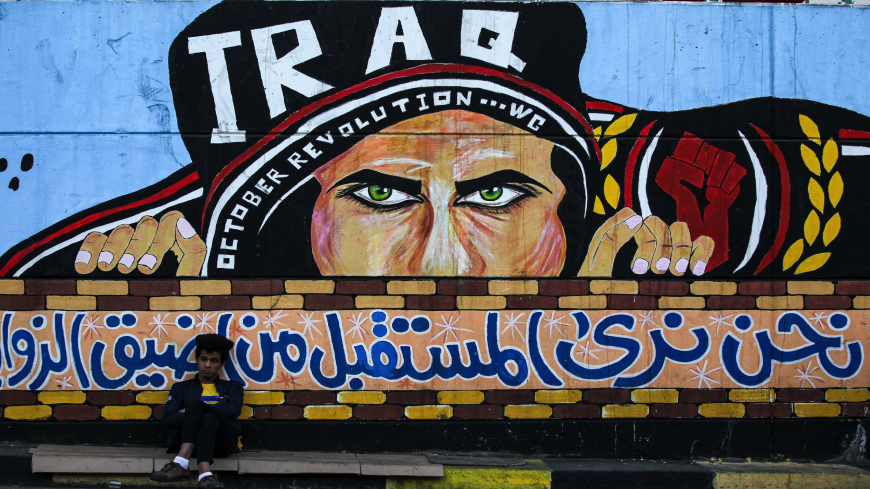 An Iraqi youth leans on a wall with a graffiti mural showing a protester with text in Arabic reading "We see the future from the narrowest angles," at the anti-government sit-in in the capital's Tahrir Square on Dec. 24, 2019. The Iraqi parliament on Dec. 24 voted to reform the electoral law, establishing a first-past-the-post system to replace the complex mix of proportional representation and list voting. Constituencies are also set to be redrawn. - AHMAD AL-RUBAYE/AFP via Getty Images

BAGHDAD, Iraq — The Iraqi parliament managed to overcome the hurdle of constituencies impeding the legislative elections law, passing the final version Oct. 29 amid major objections from some traditional political parties.

The Iraqi parliament approved a new electoral law late last year under pressure from popular protests calling for political reform. The new law increased the number of electoral constituencies and divided them based on districts instead of governorates. However, Kurdish and Sunni objections to the issue of constituencies prevented the law from being sent to the president of the Republic, Barham Salih, for ratification.

The political blocs agreed Sept. 14 to divide each of the country's governorates into a number of electoral constituencies that reflect the number of seats allocated for women in parliament under the Constitution, which is 25.

For example, the capital, Baghdad, which has about 71 seats, including 17 seats reserved for women, will turn into 17 electoral constituencies.

The Iraqi Cabinet expressed satisfaction with the passage of the law.

Abdul Hussein al-Hindawi, the prime minister’s election adviser, told Al-Monitor, “The completion of the election law is an important step toward holding the elections on schedule, meaning in the summer of next year, despite some criticism leveled by political parties against certain paragraphs of the law. However, the Federal Court law needs to be approved and the Electoral Commission needs assistance in its technical and logistical preparations.” The Federal Court, which is responsible for ratifying the election results, is currently paralyzed after a judge retired.

The most prominent objections to the final formula of electoral constituency division in the country were heard in the mixed sectarian and national governorates. Constituencies have taken into account the size of components and were consequently described as sectarian and racial. For example, Kirkuk was divided into three constituencies, each of which including a Kurdish, Arab or Turkmen majority. This, according to the objecting parties and the protest coordination committees, entrenches quotas in the distribution of parliamentary seats and does not leave much room for change.

Zulfiqar Hassan, a member of the protest coordination committee in Baghdad, told Al-Monitor that “merging districts on a sectarian basis and turning them into constituencies is just not right and does not serve the sectarian blocs in the elections.”

“We had hoped that the electoral constituencies would be divided based on the number of parliament seats, which is 329, and as the Iraqi Constitution stipulated in Article 149, meaning a parliamentary seat for every 100,000 citizens,” he added.

The traditional blocs, including the Iraqi National List led by former Prime Minister Ayad Allawi and the State of Law Coalition headed by former Prime Minister Nouri al-Maliki, were seeking large electoral constituencies by having each governorate form one electoral constituency at a minimum. These blocs believe that their supporters will be divided into small constituencies, which will prevent them from getting the number of seats they used to get in the past, unlike the Shiite religious political currents, such as the Sadrist Movement led by Muqtada Al-Sadr, which has popular bases in the center and south of the country, controls most electoral constituencies and does not see that the increase in the number of constituencies affects its chances. On the contrary, it may acquire seats that were previously the preserve of secular or traditional parties.

Allawi said in a statement Oct. 27 that the law entrenches division in the country and “without a majority, parliament has developed a new election law that caters to the convenience of some ruling blocs and parties.”

He warned that this negatively affects the electoral atmosphere and leads to its failure just like the 2018 and previous elections failed, and consequently harms the complex and extremely dangerous conditions in Iraq.

Sadrist movement parliament member Ali al-Lami told Al-Monitor, “For the first time in the country, the new electoral law will secure regional representation in the next parliament and will be a true expression of the Iraqi people, unlike the previous parliaments that included many parliament members who were unknown in their regions and had not won the most votes.”

Despite the fact that the most important obstacle in the electoral law has been overcome, this does not necessarily mean this law will not be amended, Yonadam Kanna, member of the Legal Committee, told Al-Monitor.

Kanna said that even if the president approved the law, objections and amendments will emerge again, especially as far as the “biometric” system is concerned because the law did not set forth the voting method despite the fact that the Sunni and Kurdish blocs, as well as the United Nations, stressed to Prime Minister Mustafa al-Kadhimi the need to adopt the biometric system in order to ensure the greatest degree of transparency in the elections and prevent fraud. This system provides an electronic voter register that includes all important data such as handprints, eye scans and photos.

Kanna expected other disagreements to emerge when drawing electoral constituencies and said such disagreements would be over interconnected districts and residential slums.

The electoral law is the cornerstone for holding the elections at the early date proposed by Kadhimi, which is June of next year, but more things are needed for these elections to be held.

The elections also require the completion of the Federal Court law, as this court will be in charge of approving the electoral results and providing a huge financial budget for the High Electoral Commission amid the stifling economic crisis the country has been going through since the beginning of this year.

More importantly, an appropriate security environment is needed and militias need to be disarmed in order to provide a suitable climate for the electoral process and to prevent the possibility of terrorizing voters or assassinating candidates.