A number of Iranian officials have said they will continue the path that the assassinated scientist was on. 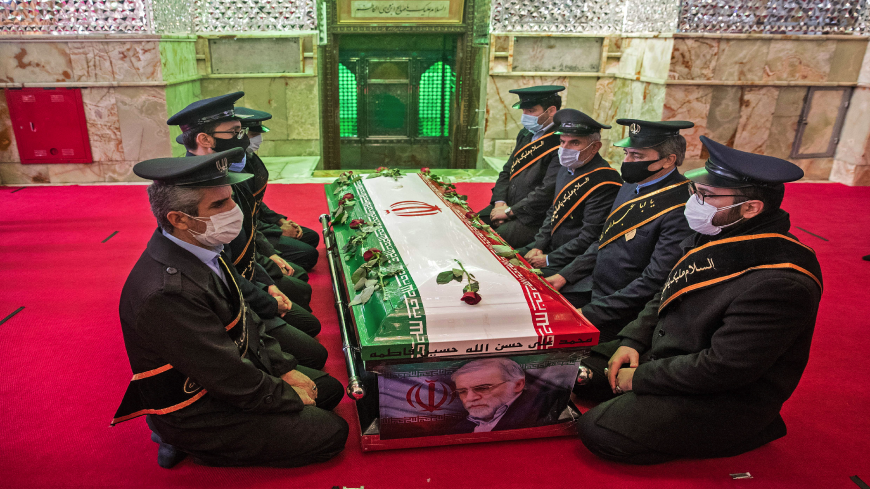 Members of Iranian forces pray around the coffin of slain nuclear scientist Mohsen Fakhrizadeh during the burial ceremony at Imamzadeh Saleh shrine in northern Tehran, on Nov. 30, 2020. Iran said Israel and an exiled opposition group used new and "complex" methods to assassinate its leading nuclear scientist, as it buried him in a funeral befitting a top "martyr." - HAMED MALEKPOUR/TASNIM NEWS/AFP via Getty Images

Iranian officials and military leaders have vowed revenge after a nuclear scientist was assassinated in Tehran.

Mohsen Fakhrizadeh was killed by a remote-controlled electronic device when riding in a car, according to Iran’s Secretary of Supreme National Security Council Ali Shamkhani. Earlier media reports have suggested there were up to a dozen gunmen involved in the attack. More recent reports suggest that a gun was attached to a car that fired on Fakhrizadeh’s vehicle. Many of the details about the attack remain murky, but Shamkhani said they know who “designed” the attack.

Iran’s Intelligence Minister Mahmoud Alavi said they have “many clues” as to who was behind the attack. Due to the “security aspect” of the attack, he said, officials cannot talk about the details until all dimensions of their investigations are pursued.

Hossein Salami, commander of Iran’s Islamic Revolutionary Guard Corps (IRGC), vowed revenge for the attack on Fakhrizadeh. “Enemies should be awaiting our revenge,” Salami said at Fakhrizadeh’s funeral. “The time, place and quality of the operation we will determine.” He said “terrorists want to suspend” Iran’s progress, but in the last 40 years since the founding of the Islamic Republic, over 17,000 people have been victims of terrorism and Iran’s progress has not been slowed.

Commander of the IRGC Aerospace Force Amir Ali Hajizadeh said that “the path of this martyr and other martyrs will be continued.” He added, “The Iranian nation will not give up revenge.”

Speaking at Fakhrizadeh’s funeral, Secretary of Iran’s Expediency Council Mohsen Rezaei suggested that at a minimum Iran suspend Additional Protocols in response to the assassination. Additional Protocols are an expanded set of requirements for more intrusive inspections that are performed by the International Atomic Energy Agency. Rezaei suggested that some of the cameras at Iranian nuclear sites be shut down, the number of inspectors be limited, and access of inspectors to nuclear sites and scientists be limited.

Iran’s Foreign Minister Mohammad Javad Zarif also tweeted in multiple languages about the assassination: “[The] [t]error attack on our scientist was indubitably designed and planned by a terrorist regime and executed by criminal accomplices. Shameful that some refuse to stand against terrorism and hide behind calls for restraint. Impunity emboldens a terrorist regime with aggression in its DNA.”

The common belief in Tehran, according to conservatives, is that Iran must retaliate. Otherwise, it will continue to be a victim of such attacks. Speaker of parliament Mohammad Bagher Ghalibaf summed up the sentiments with his statement that “the criminal enemy will not regret it until there is a strong response.” He argued that a strong response would act as a “deterrent” against future attacks.