No one has yet taken responsibility for the bombing that killed the IRGC commander. 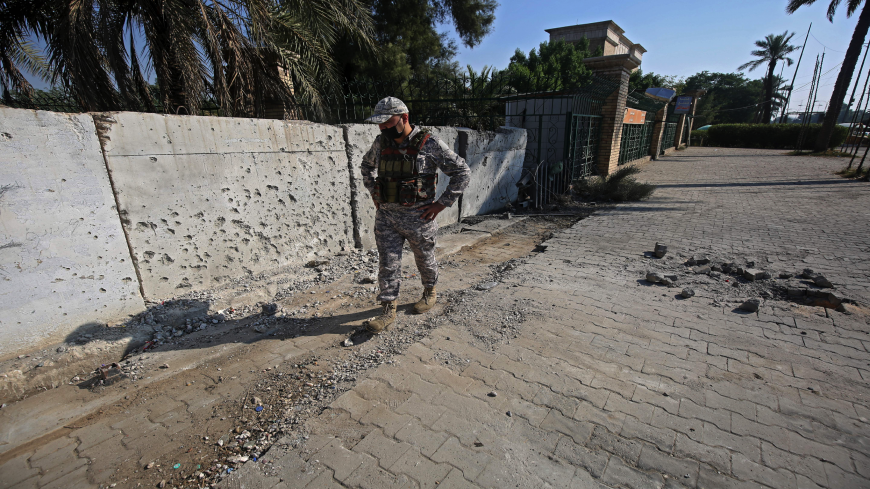 A member of the Iraqi security forces inspects the damage outside the Zawraa park in the capital Baghdad on Nov. 18, 2020, after a volley of rockets slammed into the Iraqi capital breaking a month-long truce on attacks against the US Embassy. According to the Iraqi military, four of the rockets landed in the high-security Green Zone, where the US Embassy and other foreign missions are based. Another three rockets also hit other parts of Baghdad, killing one girl and wounding five civilians. All seven rockets were launched from the same location in east Baghdad, the Iraqi military said in a statement. - AHMAD AL-RUBAYE/AFP via Getty Images

A commander in Iran’s Islamic Revolutionary Guard Corps was killed in an airstrike on the Iraq-Syria border between Saturday and Sunday, Reuters reported.

The commander in the elite Iranian military force was traveling with three other men in a vehicle that was reportedly bringing weapons across the Iraqi border into Syria, according to the outlet.

The three other men also died in the attack.

Further details, including the commander’s name, were not immediately available. Iranian state media did not report the news as of Monday.

Iran is a close ally of the Syrian government and has close relations with Iraq. In Iraq, Iran directly supports some of the Popular Mobilization Units (PMU), which formed in 2014 to fight the Islamic State. This year, some PMU groups, as well as newer Iraqi “resistance” militias, have also clashed with the US military in Iraq. In Syria, Iran supports the government in its war against rebel groups.

It is unclear who carried out the airstrike. The US warned Iraq in September to reign in militias and cease attacks in the vicinity of the US Embassy. Baghdad’s Green Zone, where the US and other embassies are located, was hit by rockets again in November.

Israel also regularly bombs Iranian targets in Syria and most recently did so last week. In May, Israel carried out airstrikes in eastern Syria, which borders Iraq. Iran also blamed Israel for the recent killing of an Iranian nuclear scientist.