Palestinians in quandary about new visitors from Gulf

Palestinians and Jordanians are working to ensure that Gulf visitors to Al-Aqsa Mosque in the Palestinian half of Jerusalem abide by the same rituals and traditions that all Muslims have practiced when visiting the holy sites. 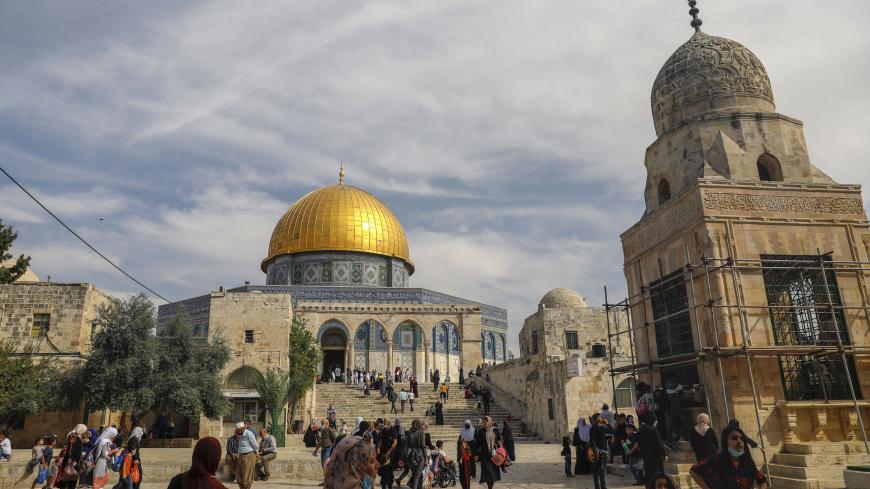 Palestinians gather to commemorate the birth of Prophet Mohammed, known in Arabic as al-Mawlid al-Nabawi, outside the Dome of the Rock in Al-Aqsa Mosque compound, Islam's third holiest site, in the old city of Jerusalem on Oct. 29, 2020.

Palestinians have for years been urging Muslims, Christians and others to visit the holy city of Jerusalem as a public expression of support to the Palestinian cause and the people of the holy city. This call, which was initiated by late Palestinian political leader Faisal Husseini, used the concept that visiting those in jail doesn’t mean recognition of the jailer. The same phrasing has been repeated numerous times since to justify visits to the occupied territories by citizens of countries that have no diplomatic relations with Israel, especially in sporting events.

A meeting of top Muslim scholars and intellectuals in 2014 led to a consensus on a fatwa (religious edict) to end a ban of Muslim visits to Al-Aqsa Mosque in Jerusalem while under Israeli occupation.

The Muslim leaders agreed to leave the door open for the “ijtihad” (conjectural interpretations of divine law) of Islamic scholars regarding the right of Muslims around the world to visit Al-Aqsa, the third holiest site for Muslims.

However, the latest unilateral decisions by the United Arab Emirates (UAE) and Bahrain to normalize their relationship with Israel without consulting with Palestinians has caused trepidation to many in the city. While Jerusalemites insist that the holy places in the city belong to the faithful from around the world, they felt unease to see Emiratis entering Al-Aqsa Mosque under Israeli protection and using the only gate — al Moghrabi — that Israel doesn’t allow Palestinian guards from the Islamic Waqf to be present at. All other gates have both Israeli police guards and a representative of the Jordan-administered Waqf Department.

Grand Mufti of Jerusalem Sheikh Mohammad Ahmed Hussein said Aug. 18 — just one week after the UAE’s decision to normalize relations with Israel — that praying in Al-Aqsa requires religious regulation. “It must not be part of legitimizing the occupation of Palestinian land and should be carried out in coordination with the responsible Palestinian authorities that regulate visits to the occupied areas.”

Since then, a few visitors from the Gulf — who avoided dressing in their national attire — have visited Al-Aqsa undercover and often with plain-clothed Israeli police accompanying them.

In general, opposition to visits by Gulf citizens and others are focused on three areas: the need to coordinate with Jordan and Palestine; the need for visitors to stay in hotels in the eastern part of the city; and that visitors should always use the main gates of the mosque that all Muslims use and not enter the mosque under Israeli protection or with their help.

The Palestinian Sharia Court’s top judge, Mahmoud Habash, publicly stated on Nov. 24 that the Palestinian position regarding Al-Aqsa has not changed: “Al-Aqsa will remain open to all those who enter it from the legitimate gates, which is the state of Palestine, and in coordination with Jordan as per the agreement [in place] since 2013 between Palestine and Jordan.”

Israeli media claim that a four-way agreement between the UAE, Bahrain, Jordan and Palestine was reached that allowed for visits to the mosque so long as they use one of the eight gates (not al-Moghrabi).

While neither Jordan nor Palestine would confirm or deny the meeting, some analysts have pointed to the Nov. 18 summit held in Abu Dhabi between Jordan’s King Abdullah II along with his UAE and Bahraini counterparts as perhaps having resolved some of the conflicting issues around the potential visits of Al-Aqsa by citizens of some of these Gulf countries.

Jordan, however, reacted quickly to parts of the claims in the Israeli media, especially the Israeli claim that al-Moghrabi gate — which is accessible by means of a bridge from the Western Wall that is revered by Jews — is an official gate for Israelis and tourists.

A Jordanian Foreign Ministry spokesman explained that “al-Moghrabi gate and the road leading to it, like the rest of the other gates of the compound, is an integral part of the Haram al-Sharif, a fact that was underlined by the United Nations Educational, Scientific and Cultural Organization (UNESCO).”

The ministry’s spokesman, Dhaifallah al-Fayez, said Nov. 24 that “Israel has been holding the keys to the gate since the 1967 occupation and has denied the Waqf administration the right to organize the entry of non-Muslims and tourists to the compound since 2000 in a gross violation of the status quo.”

The flurry of movements, statements and rebuttals points to a simple fact: The latest UAE and Bahraini normalization with Israel has become a fact of life that all parties have to learn to live with. Palestinians and Jordanians, however, want to ensure that the new, visiting Gulf citizens are aware of the complexities and sensitivities that surround the holy places. The effort now is focused on the best way to ensure that visitors stay in the Palestinian half of the city and abide by the same rituals and traditions that all Muslims have practiced when visiting the holy sites.