The Greek prime minister's visit to the United Arab Emirates comes amid tensions both states have with Turkey. 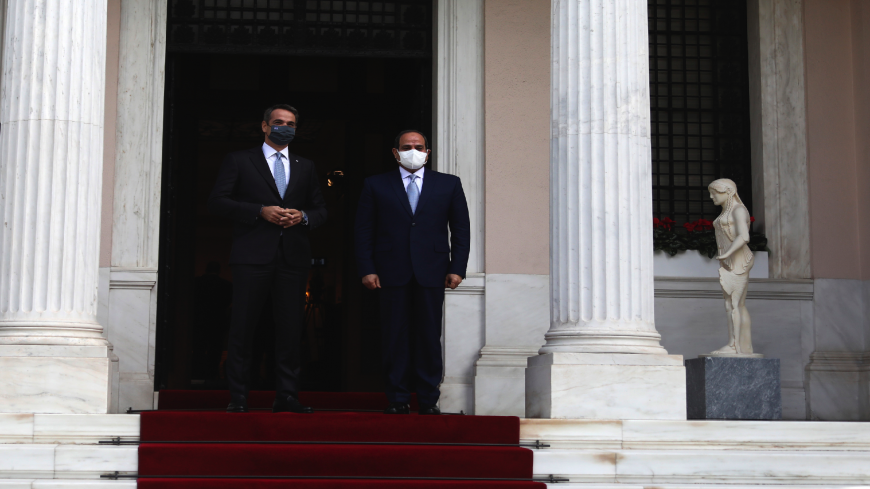 Greek Prime Minister Kyriakos Mitsotakis (L) welcomes Egyptian President Abdel Fattah al-Sisi at the Maximos Mansion in Athens, on Nov. 11, 2020. The two discussed the tensions in the Eastern Mediterranean where Turkey and Greece are arguing over the boundaries of maritime zones. - YORGOS KARAHALIS/POOL/AFP via Getty Images

The United Arab Emirates (UAE) welcomed Greece’s head of government for an official visit today. The two states signed a foreign policy and defense agreement as their mutual tensions with Turkey in the Mediterranean Sea continue.

Greek Prime Minister Kyriakos Mitsotakis visited Abu Dhabi on Wednesday and signed a “strategic partnership” and an “agreement on joint foreign policy and defense cooperation,” he said in a tweet. UAE Crown Prince Mohammed bin Zayed Al Nahyan met with Mitsotakis. Nahyan said on Twitter that the UAE and Greece established a partnership on political, economic and cultural cooperation.

Neither countries’ Foreign Ministry has released details on what exactly was in the agreement. The two leaders discussed terrorism and Turkey’s actions in the region at the meeting, according to the Greek news site Greek Reporter.

Greece is an important European ally for the UAE. Lately, their interests have converged on the issue of Turkey’s foreign policy in the region. In Libya, the UAE backs the Libyan National Army against Turkey’s ally, the Government of National Accord. In the Eastern Mediterranean, Turkey is currently conducting energy drilling in what Greece and Cyprus say are their territorial waters.

Greek-Emirati friendship is not new. In May, Greece, the UAE, Cyprus, Egypt and France issued a joint statement condemning Turkey’s energy exploration in the Eastern Mediterranean. Turkey responded by calling the countries an “alliance of evil.”

Greece has also grown closer to Egypt over its row with Turkey. Egypt is an ally of the UAE in the Gulf diplomatic crisis with Qatar and in Libya. Egyptian President Abdel Fattah al-Sisi visited Greece this week to discuss the Mediterranean.