Egypt cracks down on blasphemy in wave of arrests

The recent arrests of both Christians and Muslims accused of insulting Islam have renewed calls from rights groups to end prosecution for blasphemy in Egypt. 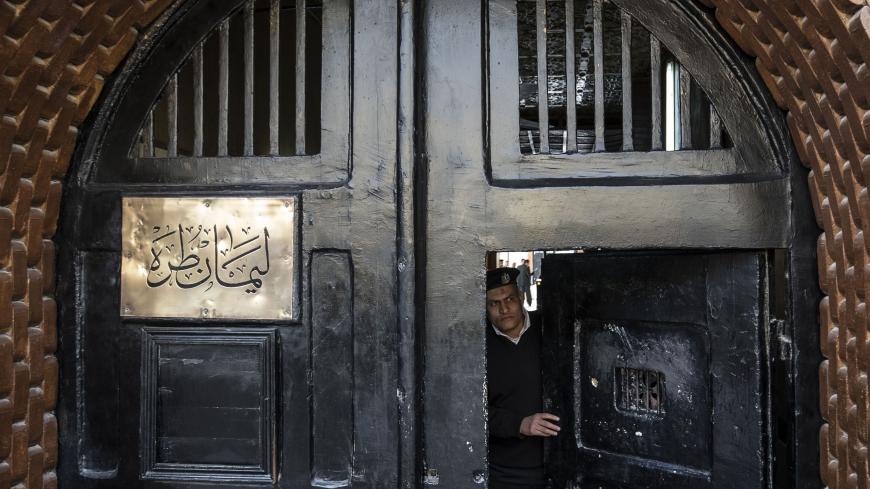 A picture taken during a guided tour organized by Egypt's State Information Service on Feb. 11, 2020, shows an Egyptian police officer at the entrance of the Tora prison in the Egyptian capital Cairo. - KHALED DESOUKI/AFP via Getty Images

In the past few days, several arrest warrants have been issued for Egyptian Christians accused of insulting Islam. A young Muslim man was also detained for mocking the hosts of the Cairo-based Holy Quran Radio Station.

These cases have sparked a debate about blasphemy and renewed calls to abolish the crime from Egyptian law.

On Nov. 11, the Supreme State Security Prosecution investigated two Christians — Ayman Rida Hanna and Mounir Masaad Hanna — and referred them to criminal court on the grounds of mocking Islam and insulting religion.

Amr al-Qadi, one of a team of attorneys for the two defendants, told Al-Monitor about the case. He said, “The security forces arrested them in June 2019 after they appeared in a video discussing prayer in Islam.”

He added, “The two men remained in pre-trial detention until the prosecution [charged them] despite our repeated calls to release them.”

In another incident, a Christian teacher and a Muslim girl were arrested Nov. 11 in the coastal Ismailia governorate over comments on Facebook posts that security forces described as “insult and contempt of religion.”

The next day, Nov. 12, the public prosecution ordered the arrest of the teacher, identified as Youssef Hani, and the girl, who goes by the name Sandosa on Facebook, on charges of blasphemy.

In a Nov. 14 statement to Al-Monitor, Makarios Lahzy, director of the Minority and Religious Groups department of the Egyptian Commission for Rights and Freedoms, said, “The lawyers appealed the detention order and their appeal was accepted. A decision to release them on bail was issued, and investigation in the case will continue until their trial.”

Lahzy added, “I was among the lawyers who volunteered to defend the Christian man and the Muslim girl. … We asked for the charges to be dropped, as the charges they are facing are unconstitutional.”

Article 98 (F) of the Criminal Code of Egypt penalizes “ridiculing or insulting a heavenly religion or a sect following it.”

Lahzy said the article is unconstitutional, explaining, “It does not clearly and expressly define contempt of or defamation and leaves the notion loose and unreliable.”

Youssef and Sandosa were just two of many who were detained recently and charged with insulting religion. Young Muslim comic Mohammad Ashraf was recently detailed for mocking the hosts of the Holy Quran Radio Station during his stand-up comedy show.

On Nov. 13, the public prosecution arrested Ashraf on charges of “insulting Islam and threatening Egyptian family values and insulting the hosts of the radio station, in addition to publishing content that threatens social peace and security and vilifies the station.”

A rights activist who works on such cases told Al-Monitor on condition of anonymity, “The Egyptian authorities have recently been expanding their detention or prosecution of citizens on charges of blasphemy.”

He added, “We are currently working on a bill to amend the blasphemy article in an effort to stop the imprisonment of citizens based on comments or sarcastic videos, because this violates freedom of expression. After completing this amendment, we will submit it to the parties concerned and the Supreme Constitutional Court for review.”