Why proposed blasphemy law horrifies many in Gaza

One scholar's call for an anti-blasphemy law has riled Gazans across the Strip, with some saying the idea is better suited to the Islamic State and will damage Hamas' image as a moderate Islamic movement. 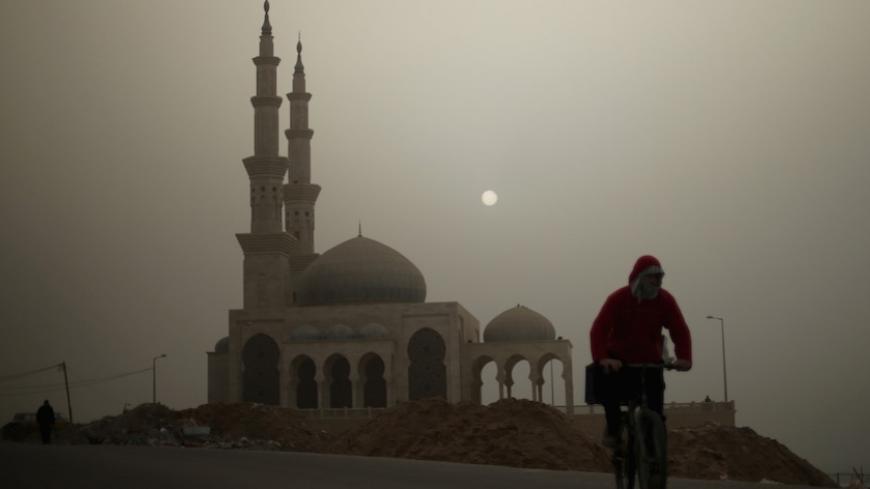 A Palestinian man rides his bicycle in front of a mosque on a stormy day in Gaza, Jan. 18, 2016. - REUTERS/Mohammed Salem

Hamas declared in its founding charter created in August 1988 that it bases its ideas, concepts and perceptions on Islam and refers to it for guidance on all of its activities.

Hamas views itself as an Islamic movement with a moderate ideology. It does not accuse anyone of disbelief, does not condone any killing based on religion and according to its scholars, religious freedom is a right guaranteed by the Quranic verse 256 of Surat al- Baqarah, “There is no compulsion in religion.”

But since Sept. 9, Khaled al-Khalidi, a professor of Palestinian history at the Islamic University in Gaza with ties to Hamas, has been posting statements on social media calling for the enactment of an anti-blasphemy law, provoking a storm of reactions online.

It all started when Khalidi, whose studies have taken him from Palestine to Saudi Arabia and Iraq, called on the Legislative Council to enact an anti-blasphemy law to protect Muslims’ ideology from disbelief and misguidance and for professors of Islamic law to participate in its drafting to define "blasphemers" and the corresponding punishment according to Sharia.

Khalidi, the head of the Palestinian Encyclopedia of Historiography Documentation, told Al-Monitor that his move is a response to the spread of destructive ideas among Muslims in Palestine, such as not believing in the Prophet Muhammad’s hadith, which open the door to intellectual deviation and ideological mistakes. He bemoaned the failure of Gaza’s authorities to fend off these ideas, especially the Ministry of Religious Affairs and associations concerned with the welfare of future generations.

He added, “As a result, I will soon form an association of scholars to defend Islam from the erroneous interpretations of some religious scholars. I was accused by some of those who departed from religion of adopting the ideas of the Islamic State, but this will not scare me. I will keep fighting them.”

The term "blasphemy" appeared in Islamic history for the first time in the Abbasid period to refer to individuals who deny Islamic dogma, mock Islamic teachings or do not believe in Islam. From an Islamic point of view, this term is closely related to infidelity, atheism and apostasy.

The anti-blasphemy law would be the first of its kind in Palestine. On Sept. 9, Khalidi asked the Palestinian Legislative Council to set forth deterrent measures against individuals he believes are blasphemers. He also called on Palestinians to cut ties with these people, refrain from marrying them, employing them or even talking to them.

Saleh al-Raqab, the former minister of religious affairs and endowments in the Hamas government and a professor of religion at the Islamic University, told Al-Monitor, “The term 'blasphemy' is attributed to those who question Islam, deny anything in it or repeat the arguments of infidels, and therefore blasphemy is tantamount to disbelief. But we do not need to enact a law in the Legislative Council to confront this phenomenon. The Palestinian Penal Code should be amended to impose a penalty on insulting a divine being and to prosecute those who promote deviant ideas. The Ministry of Religious Endowments and the Palestine Scholars Association as well as satellite channels and radio stations are called to launch religious awareness campaigns to warn of the danger of blasphemy.”

The call for an anti-blasphemy law stirred a wild wave of reactions. Palestinian intellectuals across the Gaza Strip and the West Bank argued over Khalidi’s suggestion. On Sept. 10, journalist Bothaina Ashtowi expressed objections to Khalidi’s idea and called for solving more pressing problems in Gaza before demanding an anti-blasphemy law. On Sept. 14, one citizen, Abu Bakr al-Banna, expressed support for the idea, attacked "blasphemers" for "distorting the image of the companions of the Islamic Prophet Muhammad" and called them infidels, warning them they were headed for the "ash heap of history.”

Opponents of such a law recall what happened in some stages of Islamic history, when some enlightened figures such as al-Farabi, Ibn Sina, Al-Ma'arri, Abu Bakr al-Razi and Ibn Rushd were accused of blasphemy and killed.

Yousef Farhat, the general director of the public administration for preaching and guidance in the Ministry of Religious Affairs, fiercely attacked Khalidi. He told Al-Monitor, “Calling for enacting an anti-blasphemy law is an intellectual scandal that brings us back to the medieval inquisition era in the 15th and 16th centuries, when people were persecuted and beheaded for their intellectual views. Today’s calls to confront blasphemy are an extension of IS’ ideology.”

He added, “Throughout history, Islam has witnessed numerous situations in which the right to disagree was admirably exercised but also witnessed unfair situations where differences of opinion were described as blasphemy. Some are trying to reproduce these unfair situations today by calling for an anti-blasphemy law.”

Islamic writer Ahmad Abu Ratima, who strongly and openly opposes the anti-blasphemy law, told Al-Monitor, “The accusation of blasphemy is a black spot in Islamic history. It was used by dictators against every free voice, and many Muslim scholars were killed on charges of blasphemy. Today, some people want to assume the role of God and sit in judgment of human beings. This brings us back to the dark ages. The accusation of blasphemy may have dangerous repercussions such as physical violence against the accused individual. … This is very similar to the extremist ideas of IS.”

Sheikh Mustafa Shawar, head of the Palestinian Scholars League and a Hamas figure in the West Bank, told Al-Monitor, “Palestinians do not need an anti-blasphemy law, which may do more harm than good. We should not confront deviant ideas contrary to Islam through laws and sanctions, but rather through dialogue and persuasion. Such laws will tarnish our image before the international community in light of the international fight against IS and others terrorist groups.”

The debate continues. Hamas now faces a choice, and has a chance to establish its national Palestinian identity, Islamic ideology and moderate ideas as far removed from extremism.