Turkish President Recep Tayyip Erdogan has notably not commented on the former vice president’s victory in the US presidential election. 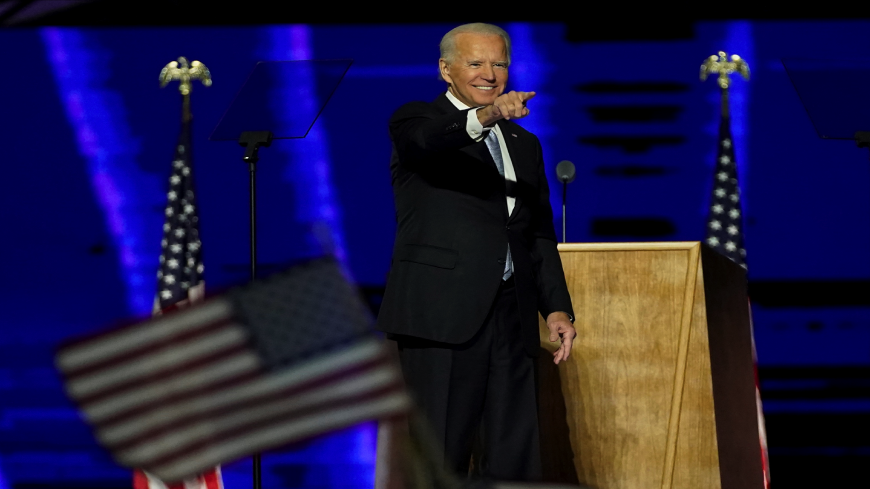 President-elect Joe Biden addresses the nation from the Chase Center, Nov. 7, 2020, in Wilmington, Delaware. After four days of counting the high volume of mail-in ballots in key battleground states due to the coronavirus pandemic, the race was called for Biden after a contentious election battle against incumbent Republican President Donald Trump. - Andrew Harnik-Pool/Getty Images

Former Vice President Joe Biden received several congratulatory messages from the Middle East after US media outlets projected him the victor on Saturday in the US presidential election. Leaders with both friendly and adversarial relationships with the Trump administration commented on the outcome of the highly anticipated election.

“Joe, we’ve had a long & warm personal relationship for nearly 40 years, and I know you as a great friend of Israel,” said Netanyahu.

Netanyahu congratulated Biden hours after other politicians did, and then thanked Trump in a subsequent tweet for recognizing Jerusalem as Israel’s capital, his stance on Iran and his work in facilitating Israel’s normalization agreement with the United Arab Emirates (UAE).

Netanyahu and former President Barack Obama, under whom Biden served, had a cooler relationship due to their disagreements on the Iran nuclear deal, Israeli settlements in Palestinian territory and more.

Israel’s long-time leader sought to hedge his bets late in the election due to the possibility of a Biden win. During a call with Trump in late October, Netanyahu declined to criticize Biden after Trump suggested that Biden would not have been able to get Sudan to recognize Israel.

Several Kurdish politicians in Iraq and Syria congratulated Biden. Prime Minister Masrour Barzani of the Kurdistan Regional Government in Iraq tweeted on Saturday, “I look forward to continuing the close, strong cooperation between the Kurdistan Region and the US.”

Trump lost support among Syrian Kurds when he repositioned US troops in northeast Syria to make way for a Turkish attack on the SDF in October 2019.

On the other hand, there is some enthusiasm for Biden on Kurdish social media. Much of it focuses on a speech he gave to the Kurdistan Region parliament in 2002 in which he said “the mountains are not your only friends.”

Kurds often say “the mountains are our only friends” due to the opposition Arab, Turkish and Iranian governments have demonstrated against their aspirations for statehood.

Iraqi President Barham Salih called Biden “a friend and trusted partner in the cause of building a better Iraq” on Twitter on Saturday.

Several Iranian politicians commented on Biden’s projected win. Foreign Minister Mohammad Javad Zarif did not mention Biden in his comments but referenced a new administration coming to power in Washington.

US Secretary of State Mike Pompeo took issue with Ayatollah Ali Khamenei's comments on the election. The Iranian supreme leader called the US election a “spectacle,” to which Pompeo replied “Your elections are a joke” on Twitter.

US-Iranian relations improved under Obama when the two states signed the Iran nuclear deal in 2015. Trump withdrew from the agreement in 2018 and reimposed sanctions on Tehran. Biden has signaled a willingness to conditionally re-enter the deal, but the Iranian government does not want this at present. Biden frequently criticized Trump’s Iran policy on the campaign trail.

Saudi Arabia’s Crown Prince Mohammed bin Salman, who is a close ally of Trump, also sent a congratulatory “cable” to Biden, the state-run Saudi Press Agency reported. Several observers made a big deal out of Salman not congratulating Biden for several hours, but in the end, Salman sent the message just a day after the news broke.

Qatar, which has had a mixed relationship with the United States since Trump took office, also congratulated Biden via Emir Sheikh Tamim bin Hamad Al Thani. Trump originally sided with Saudi Arabia in its dispute with Qatar during the 2017 diplomatic crisis. The administration has since warmed to Qatar.

The heads of state of Lebanon, Egypt, the UAE and Jordan also congratulated Biden.

Notably, Turkish President Recep Tayyip Erdogan has not congratulated Biden, who has had a complex relationship with Turkey. Biden criticized Turkey’s invasion of northeast Syria last year, and his past comments calling Erdogan an “autocrat” angered many there. Biden also repeatedly spoke out against Turkey’s support for Azerbaijan in the Nagorno-Karabakh conflict toward the end of his campaign.