What are Biden's Mideast positions?

As the former vice president officially becomes the Democratic Party's nominee for president, a look back on his positions shows he differs from Trump on Iran and Saudi Arabia, and he has been asked to answer for his vote on the 2002 Iraq War resolution. 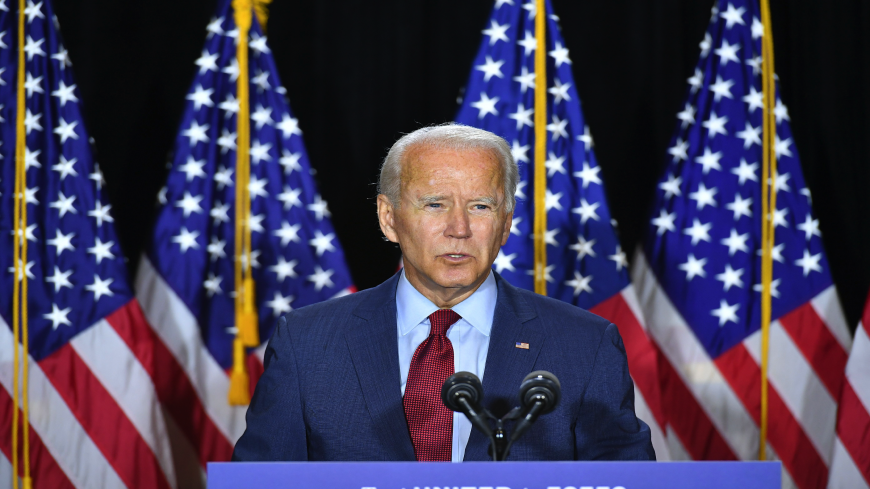 Democratic presidential nominee and former US Vice President Joe Biden speaks to the press after receiving a briefing on COVID-19 in Wilmington, Delaware, on Aug. 13, 2020. - Photo by MANDEL NGAN/AFP via Getty Images

Former Vice President Joe Biden officially became the Democratic Party’s nominee for president on Tuesday night at the Democratic National Convention. The longtime senator and former chair of the Foreign Relations Committee has a long record on Middle East policy, as well as relationships with many of the leaders in the region.

Foreign policy has not been the biggest issue during this presidential campaign. The election cycle is largely a referendum on Donald Trump, and the convention has focused on the president’s handling of the COVID-19 pandemic, the economy, social justice, and protests against racism and police brutality — some of which have turned violent.

As vice president, Biden is associated with the policies of former President Barack Obama's administration, including the 2015 Iran deal, the US withdrawal of forces from Iraq in 2011 and the formation of a global coalition against the Islamic State (IS) in 2014. He might have cooler relations than Trump does with Israel, Saudi Arabia and Turkey, but perhaps better dialogue with Iran.

On the Iran deal, Biden supports conditionally rejoining the agreement the Obama administration negotiated, formally called the Joint Comprehensive Plan of Action, which removed sanctions on the Islamic Republic in exchange for its compliance on its nuclear program. Trump withdrew the United States from the deal in 2018. Biden thinks the deal successfully prevented Iran from building a nuclear weapon, and he would become party to it again if Iran can prove it is abiding by it.

“If Tehran returns to compliance with the deal, President Biden would re-enter the agreement, using hard-nosed diplomacy and support from our allies to strengthen and extend it, while more effectively pushing back against Iran’s other destabilizing activities,” reads Biden’s campaign website.

Iran is an election issue this year. Trump supports a “maximum pressure” campaign against the country, and tensions in the Gulf are at a high.

“Iran will insist on an even better deal than they made with Obama,” said Trump on a Biden presidency at a Monday rally.

Biden’s campaign website includes an anti-war message that echoes Trump in 2016 and Obama in 2008. Biden pledges to “end forever wars” and remove troops from Afghanistan.

The campaign website also states that the US military should focus on fighting IS and al-Qaeda, which indicates Biden is not in favor of ending all US military operations in the region. The United States has several thousand troops in Iraq and Syria, where they fight alongside Iraqi security forces and the Kurdish-led Syrian Democratic Forces against IS.

Biden’s past positions on Iraq and Obama’s legacy there are controversial and have come up during the 2020 election.

In 2002, Biden voted for the US invasion of Iraq, later calling the vote a “mistake.” In 1991, he voted against the United States fighting in the Gulf War against Iraq after it invaded Kuwait.

Obama eventually removed US troops from Iraq in 2011, fulfilling a campaign promise. The withdrawal created a power vacuum in the country, leading to IS sweeping through northern Iraq in 2014. The same year, the Obama administration sent American forces back in as part of the global anti-IS coalition led by the United States.

Moreover, as a senator in 2006, Biden wrote an op-ed in The New York Times calling for the division of Iraq into three autonomous zones: one Kurdish, one Sunni and one Shiite. The Kurdistan Region of Iraq was already an autonomous region at the time. There has also been talk of a Sunni autonomous zone recently. Biden’s proposal did not account for the ethnic and religious diversity in Iraq in the article and has been criticized by some on the left.

On the Gulf, Biden pledges in his campaign website to end US support for the Saudi-led coalition in Yemen. This is a difference he has with Trump, who is a staunch ally of Saudi Arabia.

Biden is a pro-Israel Democrat, but he does not enjoy the close, personal relationship with Israeli Prime Minister Benjamin Netanyahu that Trump does.

Trump is a staunch supporter of Israel and recently helped the Jewish state establish diplomatic relations with the United Arab Emirates. Trump also conditionally backed efforts by Israel to annex parts of the Palestinian West Bank, which many in the region felt harmed the prospects of a two-state solution to the conflict.

Obama supported two states for Israel and the Palestinian territories, and Biden is following in his footsteps, which puts him at odds with Netanyahu. In December, Biden said the United States must "pressure" Israel into supporting a two-state solution and said Netanyahu was not committed to this.

“Bibi Netanyahu and I know one another well,” said Biden during a debate. “He knows that I think what he’s doing is outrageous.”

On Turkey, Biden may also usher in cooler relations should he win. In December, Biden called Turkish President Recep Tayyip Erdogan an “autocrat,” which angered many Erdogan supporters. Biden also criticized Trump’s repositioning of US troops in Syria in October that preceded Turkey’s incursion into northeast Syria to fight Kurdish groups.

Biden chose Senator Kamala Harris as his running mate. The California native has similar views to Biden on the region. Harris backs re-entering the Iran deal, wants to end US support for Saudi Arabia's war in Yemen and is pro-Israel.