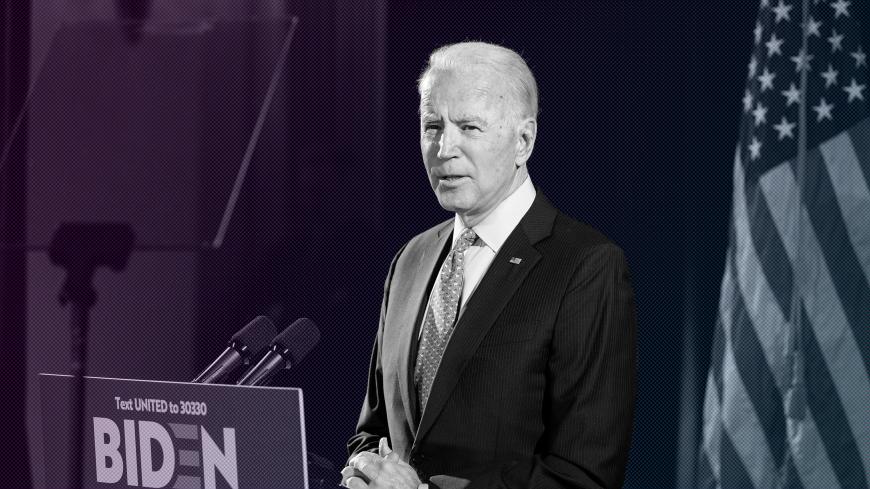 Former Vice President Joe Biden (D) speaks about the novel coronavirus and the response to it at the Hotel Du Pont in Wilmington, DE, US, March 12, 2020. - Michael Brochstein/Echoes Wire/Barcroft Media via Getty Images

Now that former Vice President Joe Biden has locked up the Democratic presidential nomination, myriad advocacy and lobbying groups are vying for his ear as he fleshes out his foreign policy platform. And to get Biden’s ear, they need to go through his advisers.

Biden has already staked out drastically different positions from President Donald Trump with vows to reassess US-Saudi relations and reenter the Iran nuclear deal as well as his opposition to Israel annexing the West Bank. But as always, the devil is in the details.

Will Biden fully undo the decades-long US-Saudi security partnership? What about the troubled US-Turkish alliance? To what extent and at what pace is he willing to move to lift Iran sanctions? How will he stop Israel from annexing the West Bank without using military aid restrictions as a pressure point?

The man tasked with calibrating the answers to these questions is Tony Blinken, Biden’s former national security adviser who has been in the vice president’s orbit for the better part of 18 years. Blinken now oversees a growing cadre of familiar faces from the center-left of Washington’s foreign policy establishment who are tasked with advising the campaign both formally and informally.

Brian McKeon, Jeffrey Prescott and Julianne Smith, three of the vice president’s former deputy national security advisers under Blinken, are also advising the campaign. Notably, Prescott went on to serve as Obama’s senior adviser for Iran, Iraq, Syria and the Gulf states after working for Biden.

Ely Ratner, who served as Biden’s deputy adviser under Kahl and is currently the executive vice president at the Center for a New American Security (CNAS), is also providing informal outside counsel.

Elizabeth Rosenberg, a senior fellow with CNAS’ energy, economics and security program, is also involved in hammering out the campaign’s Iran policies. As a senior Treasury Department adviser under Obama, Rosenberg helped tighten sanctions on Iran in the lead-up to the nuclear deal negotiations while implementing sanctions on Syria and Libya.

Biden’s team of Obama alumni also includes one prominent foreign policy hand from the George W. Bush administration: Nicholas Burns, a career foreign service officer who supported the Iraq war and became the undersecretary of state for political affairs in 2005.

Neither the Biden campaign nor any of his advisers made themselves available for interviews.

Many of Biden’s foreign policy gurus sit on the advisory boards for both Foreign Policy for America and National Security Action, two advocacy groups founded to push back against Trump’s foreign policy. Many of them also worked at the Penn Biden Center for Diplomacy and Global Engagement, which the vice president established after leaving office. A fourth major haven for exiled Obama administration officials under the Trump presidency is WestExec Advisers, a geopolitical consulting firm co-founded by Blinken.

Blinken first served on President Bill Clinton’s National Security Council before signing on in 2002 as the foreign policy adviser for Biden, who as a senator served as chairman and top Democrat on the Foreign Relations Committee through 2008. Blinken’s star rapidly rose after following his boss to the White House, where he eventually became Obama’s deputy national security adviser and then deputy secretary of state under John Kerry — who endorsed Biden’s 2020 presidential bid all the way back in December.

Like many of Biden’s campaign advisers, Blinken was instrumental in crafting the Iran nuclear deal. The vice president has vowed to re-enter the accord, which would necessitate lifting the broad sectoral sanctions on Iran that have formed the crux of Trump’s "maximum pressure" campaign. Even Burns called for “a very strong effort to get to the negotiating table with Iran” shortly after leaving the Bush administration in 2008.

But Kahl and Rosenberg have taken a cautious approach to crafting the vice president’s sanctions messaging. After Biden’s former primary opponent, Sen. Bernie Sanders, I-Vt., and 33 other progressive lawmakers called on Trump to fully lift all financial sanctions on Iran during the COVID-19 pandemic, the vice president put out a statement that simply called for more humanitarian leeway in the current sanctions regime.

For her part, Rosenberg largely maintained a neutral tone while moderating a CNAS panel on sanctions last week. But at one point she did refer to Iran as “a rogue regime” — a common refrain echoed throughout Washington’s tight-knit foreign policy establishment for the last several decades.

Speaking at a Capitol Hill panel hosted by Foreign Policy magazine and the dovish Quincy Institute in February, Smith cautioned, “There’s tremendous uncertainty about the degree to which the next president can come in and get everyone back around the table and recommit to the deal, strengthen it and continue to address Iran’s nefarious activities throughout the region.”

And while Biden’s advisers are still wary of Tehran’s proxies throughout the region, the vice president has been in lockstep with the rest of his party in condemning Trump’s January strike on Maj. Gen Qasem Soleimani, the former leader of Iran’s expeditionary Quds Force, while he visited Iraq.

Following the strike, Prescott argued in a Foreign Policy op-ed, “Many of the ideological architects of one of the United States’ most disastrous foreign-policy decisions — the 2003 invasion of Iraq — are spinning a tale to support the president’s most dangerous move to date.”

Still, Blinken also advised Biden when he voted to authorize Bush to invade Iraq in 2002, a specter that has loomed over Biden’s modern political career. That vote dogged him in his 2008 campaign for president, and Trump mercilessly wielded Clinton’s Iraq war authorization vote as a cudgel against her in the 2016 campaign.

Blinken was also with Biden at the White House when Obama put the vice president in charge of the Iraq portfolio. During that time, they were unable to conclude a status of forces agreement with the Nouri al-Maliki government, leading to the withdrawal of US troops. When the Islamic State rampaged throughout Iraq and Syria, Blinken was serving as Obama’s deputy national security adviser and helped design the US strategy to dismantle the caliphate.

He argued at the time that keeping the Kurds “focused on Raqqa keeps [them] away from the Turkish-Syrian border — and any effort by Syrian Kurds to join the area they control in a contiguous Kurdish region or state.” He added that Trump “should clearly reiterate” US opposition to a Kurdish state.

Trump ultimately did arm the Kurds, who were indeed integral in the US-backed effort to dismantle the caliphate. But he sparked bipartisan backlash last year when he withdrew US troops from the Turkish-Syrian border, paving the way for Turkish President Recep Tayyip Erdogan’s ongoing offensive against them. Biden quickly joined the chorus of critics condemning the move as a betrayal of a close US partner.

Biden’s future approach to Turkey remains unclear, but he has clearly promised to reconfigure US-Saudi relations. Specifically, he has vowed to end US support for Crown Prince Mohammed bin Salman’s war in Yemen and impose consequences for his role in the murder of journalist Jamal Khashoggi.

Blinken was already criticizing Trump’s Gulf policy in 2017, when he wrote another New York Times op-ed criticizing Trump for siding with the Saudis after they spearheaded a regional blockade against neighboring Qatar that is still in place today despite gradually loosening restrictions.

Ironically, it was Blinken and Biden’s other advisers who initially urged Obama to back Saudi Arabia’s aerial campaign against the Iran-backed Houthi rebels, largely to placate the kingdom’s outrage over the nuclear deal with Tehran.

In Blinken’s op-ed on the Qatar blockade, he noted that he was “the first senior American official” to meet the crown prince after he intervened in Yemen. Blinken recounted that he asked the crown prince Saudi Arabia’s end objective in Yemen. The answer: “to remove every last vestige of Iranian influence.”