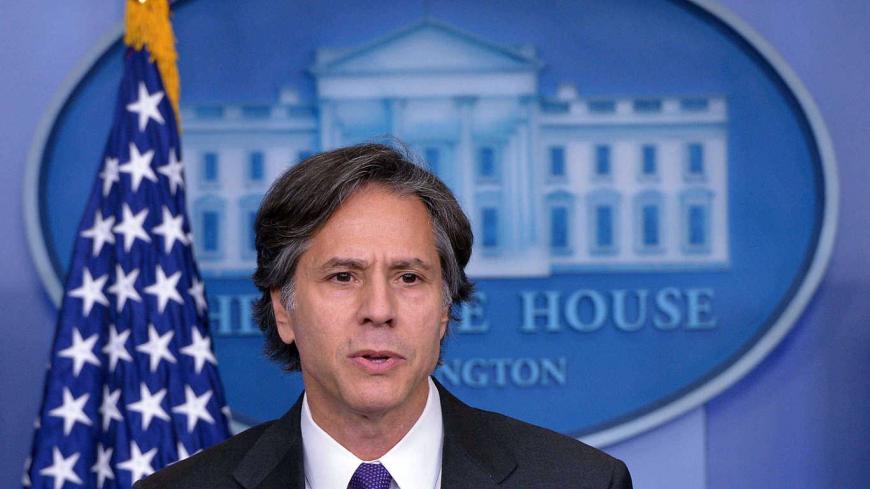 Deputy national security adviser Tony Blinken speaks during the daily briefing in the Brady Briefing Room of the White House on July 28, 2014, in Washington, DC. - Mandel Ngan/AFP via Getty Images

President-elect Joe Biden named foreign policy veteran Antony Blinken as his pick for Secretary of State on Monday, tasking a trusted aide with fulfilling his campaign pledge to reassert America’s standing on the world stage.

Blinken, 58, has worked alongside the incoming president for nearly two decades, dating back to Biden’s chairmanship of the Senate Foreign Relations Committee. Blinken also served as a senior director at the national security council and foreign policy speechwriter in the Clinton White House, and later rose through the ranks of the Obama administration to serve as deputy secretary of state from 2015-2017. Blinken was Biden’s chief foreign policy adviser during the 2020 presidential campaign.

If confirmed by the Senate as expected, Blinken will take the helm at the State Department at a time when deadly civil wars rage in Libya, Yemen and Syria, the Islamic State poses a simmering threat and the rift among the Gulf states remains unresolved.

Blinken would oversee a drastically different foreign policy than that of current Secretary of State Mike Pompeo, whose embrace of Trump’s “America First” foreign policy the Biden team has vowed to reverse.

“We’d actually show up again, day in, day out. But to engage the world, not as it was in 2009 or even in 2017 when we left it, but as it is and as we anticipate it will become,” Blinken told CBS’s Intelligence Matters podcast in September.

One of the Biden administration’s early foreign policy priorities will be salvaging the landmark Iran nuclear deal, from which Trump unilaterally withdrew in 2018. Biden has called for rejoining the accord if Iran resumes compliance.

Doing so, Blinken has said, would put the United States "in a position to use our renewed commitment to diplomacy … but also we'd be in a much better position to effectively push back against Iran's other destabilizing activities.”

The incoming administration will face a long list of challenges in Syria, where a brutal civil war has killed hundreds of thousands and spawned a massive refugee crisis.

Blinken, who played a key role in crafting President Barack Obama’s troop drawdown in Iraq, has criticized Trump’s move last year to pull troops from northeast Syria as one that “gutted American credibility.”

During a May interview with CBS, Blinken advocated for keeping US boots on the ground in Syria and expressed regret over the Obama administration’s actions — or lack thereof — in the nearly decade-long conflict that saw the former president draw a “red line” on chemical weapons use that he never enforced.

In war-wracked Yemen, another country where civilians are bearing the brunt of a protracted civil war, the president-elect has pledged to end US support for the Saudi-led military campaign.

In 2018, Blinken and several other former Obama administration officials signed an open letter calling on the Donald Trump administration to withdraw support for Riyadh’s military campaign, which rights groups have accused of war crimes.

The US relationship with Saudi leaders and other Middle East autocrats would “look very different” under Biden, his chief foreign policy adviser said in July.

"We would review the US relationship with the government of Saudi Arabia, to which President Trump has basically given a blank check to pursue a disastrous set of policies, including the war in Yemen, but also the murder of Jamal Khashoggi [and] the crackdown on dissent at home," said Blinken.

Blinken has also signaled tougher US policy on Egypt. He accused Trump of undermining "our moral standing globally and our ability to lead" through his relationship President Abdel Fattah el-Sisi, the military strongman who Trump reportedly referred to as his “favorite dictator.”

Blinken, who is the stepson of a Holocaust survivor, has touted Biden’s “unshakeable commitment” to Israel’s security and recently questioned whether the Trump administration’s planned sale of F-35 stealth fighters to the United Arab Emirates would undermine Israel’s qualitative military edge.

“[Biden] believes strongly that a secure Jewish homeland in Israel is the single best guarantee to ensure that never again will the Jewish people be threatened with destruction," Blinken told the Times of Israel.

Blinken has also said his boss would ensure disagreements with Israel are kept private.

“Joe Biden believes strongly in keeping your differences as far as possible between friends behind doors, maintaining as little distance in public as possible,” Blinken told a pro-Israel Democratic group in May.

Biden has rounded out his foreign policy and national security team with a number of other Obama-era officials, including career diplomat Linda Thomas-Greenfield as his pick for US ambassador to the United Nations. Thomas-Greenfield, who served as the top diplomat for African affairs from 2013 to 2017, has called for the new administration to bring back career diplomatic staff forced out under Trump.

“The United States needs a top-to-bottom diplomatic surge,” she and former deputy secretary of state William J. Burns wrote in Foreign Affairs. “The Trump administration’s unilateral diplomatic disarmament is a reminder that it is much easier to break than to build. The country doesn’t have the luxury of waiting for a generational replenishment.”

Biden also named Avril Haines as the first woman to serve as director of national intelligence and Jake Sullivan, a former official in the Clinton State Department, as national security adviser.

Former Secretary of State John Kerry will serve as Biden’s special presidential envoy for Climate, suggesting the new president will make climate policy a major focus of his administration. Biden has already pledged to rejoin the Paris climate agreement on day one of his presidency.