Burns, a former ambassador to Jordan and Russia, would bring with him decades of experience in the foreign service. 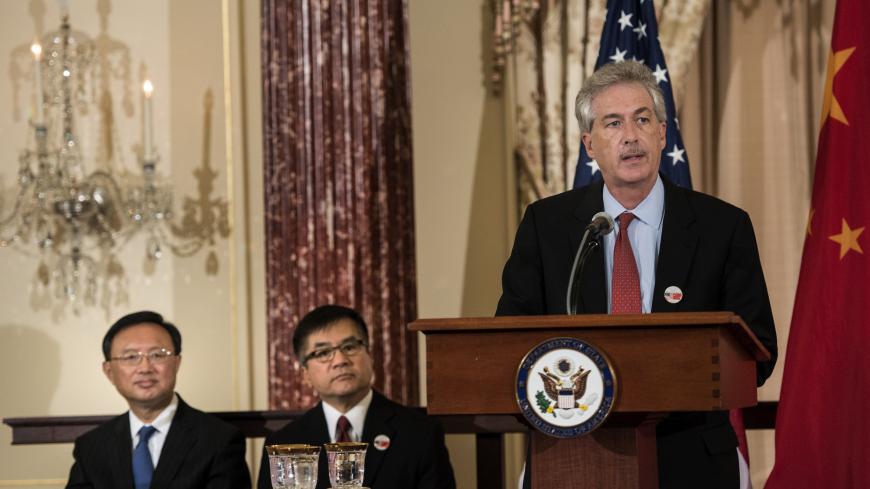 Chinese State Councilor Yang Jiechi (L) and US Ambassador to China Gary Locke (C) listen while US Deputy Secretary of State William Burns speaks during an eco-partnership event at the US Department of State, July 11, 2013, in Washington, DC. - BRENDAN SMIALOWSKI/AFP via Getty Images

President-elect Joe Biden has named career diplomat William Burns as his choice to be the next director of the Central Intelligence Agency. If confirmed, Burns would be the nation's first-ever spy chief with a resume consisting mainly of State Department experience.

“Bill Burns is an exemplary diplomat with decades of experience on the world stage keeping our people and our country safe and secure,” Biden said in a statement early Monday. “He shares my profound belief that intelligence must be apolitical and that the dedicated intelligence professionals serving our nation deserve our gratitude and respect."

He and Jake Sullivan, Biden’s choice for national security adviser, spearheaded the secret talks with Iran that led to the landmark nuclear agreement that Tehran and world powers reached in 2015. Biden has pledged to rejoin the pact, which outgoing President Donald Trump withdrew from in 2018, if Iran returns to strict compliance.

At an Al-Monitor event in September 2019, Burns described Trump’s withdrawal from the Iran nuclear deal as a "foolish mistake" while making a powerful case for US diplomatic leadership in the region.

“What happens in Vegas stays in Vegas doesn’t apply in the Middle East,” he said, adding, “What happens there tends to spill over into the rest of the world.”

Burns retired from the State Department in 2014 to run the Carnegie Endowment for International Peace, a think tank in Washington. Burns has been vocal in his criticism of the Trump administration, penning several articles blasting what he’s described as Trump's war on diplomacy.

The veteran diplomat is the recipient of three Presidential Distinguished Service Awards and holds the highest civilian honors from the Pentagon and the US intelligence community. After earning his master’s and doctoral degrees in international relations from Oxford University, Burns entered the foreign service in 1982.

Burns’ selection is in line with Biden’s pattern of selecting career professionals and known quantities for top national security jobs in his administration. His nominee for secretary of state, Antony Blinken, is a longtime aide who held senior foreign policy posts under Obama. Biden tapped Avril Haines, another familiar face who served as the CIA's deputy director under Obama from 2013-2015, as his director of national intelligence.

“Bill Burns is one of the most principled & respected national security professionals of our time,” Brennan tweeted. “The CIA will be most fortunate to have him at the helm.”

Burns will replace Gina Haspel as CIA director if confirmed by the Senate. Haspel, the first woman to lead the intelligence agency, faced criticism in her confirmation hearings over the secret “black site” she ran in Thailand where al-Qaeda suspects were held under the CIA’s controversial “enhanced interrogation” program.

Michael Morell, a 30-year-veteran of the CIA and deputy director under Obama, was floated for the top job under Biden. Morell took himself out of the running amid progressive opposition, with Democratic Sen. Ron Wyden of Oregon and others calling attention to his previous defense of the CIA’s torture program and drone strikes.

Biden, who takes office in less than two weeks, has asked the Senate to quickly confirm his national security nominees. They’ll have a smoother path to confirmation after Georgia’s runoff races last week gave the Democrats narrow control of the upper chamber.

2020 US election
Intelligence and espionage