Turkish forces withdraw from largest base in northeast Syria

Ankara has begun pulling back forces and equipment from an observation post long surrounded by regime forces in Syria’s northeast Idlib province. 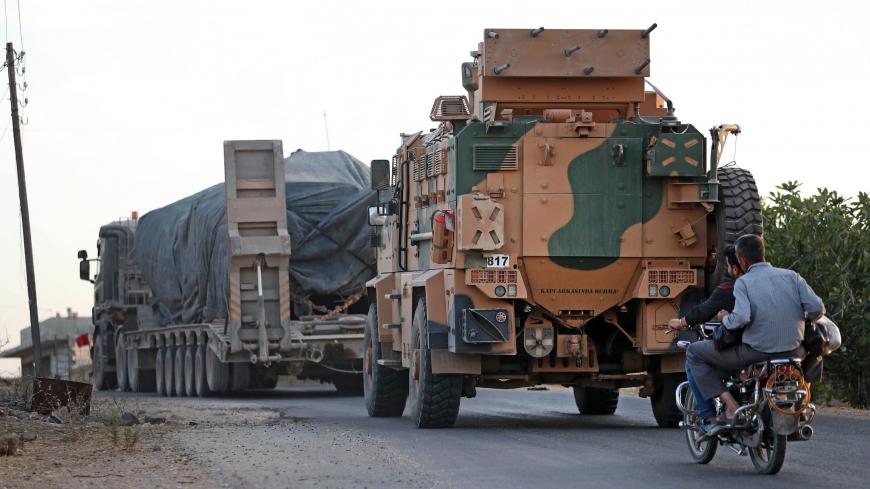 A Turkish military convoy drives through the village of Iblin near Ariha in Syria's rebel-held northwestern Idlib province on Oct. 20, 2020, after vacating the Morek post in Hama's countryside. - OMAR HAJ KADOUR/AFP via Getty Images

ISTANBUL ­— Turkish forces began withdrawing from Ankara’s largest base in Syria’s northeastern Idlib province shortly after midnight Tuesday, according to the Syrian Observatory for Human Rights.

The group reported that convoys carrying military personnel and equipment were seen leaving the Morek base, one of 12 Turkish observation posts established in the region to monitor a fragile cease-fire in the nine-year-old conflict.

In 2019, the Morek base was encircled by Russian-backed forces loyal to Syrian President Bashar al-Assad. According to Reuters, which reported the news Monday, Turkish forces are now consolidating their positions at remaining observation posts in the region, though analysts predict more bases may be abandoned in the near future.

Oytun Orhan, coordinator for Levant studies at the Center for Middle Eastern Studies in Ankara, said the Morek base along with several other Turkish observation posts established in 2018 were no longer serving their initial purpose of monitoring cease-fire infringements after territorial gains by the Assad forces last year left them isolated behind Syrian regime lines.

“Russia and the Syrian regime are trying to push Turkey north [or] at least to evacuate these observation posts,” Orhan told Al-Monitor. “It is understood the two sides have reached an agreement where Turkey will evacuate four of them.”

He added, “This does not create a critical change on the ground. There is no decrease in the number of Turkish forces. … On the contrary, there is an increase in Turkish military deployment in the area, so I don’t expect any kind of [larger] Turkish withdrawal.”

Idlib remains one of the last rebel-held areas of Syria, where opposition groups backed by Turkey continue to be active, though fighting has largely subsided following a Russia/Turkey-brokered cease-fire established on March 5.

Under the cease-fire agreement, Russian and Turkish forces aimed to create a security corridor on both sides of the M4 highway, which runs east-west through Idlib, and the two militaries agreed to hold joint patrols on the road, though the actual patrols were repeatedly delayed.

Between 10,000 and 15,000 Turkish troops are posted in the Idlib enclave, where Ankara has pledged to disarm rebel fighters aligned with extremist militias that remain in the region. According to reports by Turkish state media outlets, convoys of military equipment continue to support Ankara’s positions in Idlib, but Orhan noted efforts to supply observation posts encircled by regime forces may have become more complicated in recent months.

“Most probably, Russia did not give some guarantees for securing the Turkish convoys supplying those observation posts,” Orhan told Al-Monitor, adding Turkish supply missions required Russian escorts in regime-held areas.

The developments come after Turkish and Russian delegations held talks in September over the ongoing crises in Idlib and Libya, where the nations support opposing sides in both conflicts. Russian officials reportedly requested Turkey withdraw from some observation posts in Idlib during the negotiations.

Ozgur Unluhisarcikli, director of the German Marshall Fund in Ankara, said the Turkish withdrawal from Morek Tuesday was likely an attempt to protect military forces in the event of renewed clashes with the Syrian regime.

“This is a sign of further weakening of the modus vivendi between Turkey and Russia in Syria,” Unluhisarcikli told Al-Monitor.

The events also follow a string of protests in Idlib against the continued Turkish military presence in Morek as well as in Surman that Turkish state media outlets claim are organized by the Syrian regime.

Diplomatic pressure on Turkey’s involvement in Syria has also grown among some leaders in the European Union.

In August, 68 members of the European Parliament called on the Turkish military and its proxy forces “to end their illegal occupation” in northern Syria and retreat from the region in a letter presented to the United Nations Human Rights Council following a report by the organization’s Independent International Commission of Inquiry on Syria.

The signatories demanded the Turkish government end “political, economic, and military support for all groups” that take part in the “systematic human rights violations” outlined in the UN report.

“We always underline that we are here to protect the territorial integrity of Syria at the foremost,” Cavusoglu said in an Oct. 13 joint conference with Linde. “We don’t want to divide Syria.”

Meanwhile, US counterterrorism activities continue in Idlib, where a US drone strike killed two al-Qaeda officials on Oct. 16 near the town of Arab Sa’id. In October 2019, a US military operation in Idlib led to the death of Abu Bakr al-Baghdadi, the former leader of the self-proclaimed Islamic State.

According to the United Nations, about four million people live in northwest Syria, 2.7 million of which have been displaced as a result of the conflict.