The Syrian airstrike this week against a Turkish military convoy in Idlib has prompted speculation that Russia and Syria are cooperating at Turkey's expense. 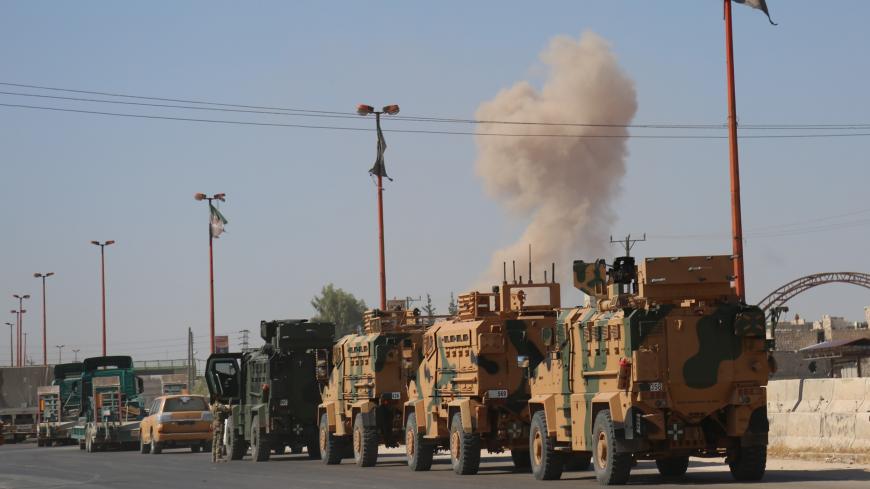 A Turkish military convoy is seen on Aug. 19, 2019 in Syria's northern province of Idlib. - Izzettin Idilbi/Anadolu Agency via Getty Images

At 8:55 a.m. Aug. 19, a Syrian Su-22 fighter jet attacked a pickup truck of Faylaq al-Sham, a Free Syrian Army faction that Russia describes as a terror outfit. The vehicle was part of a Turkish convoy en route to reinforce the No. 9 Morek observation post in the rebel-held Syrian province of Idlib. Turkey's Defense Ministry said in a statement later that day that it had notified Russian authorities about the Turkish convoy before it began its journey at 5:30 a.m. Nevertheless, the convoy was struck.

Turkey's statement points out that Russia turned a blind eye to the attack that killed three people and wounded others, including a Turkish soldier. Currently, Ankara is trying to determine whether Russia's failure to stop the airstrike was negligent or intentional. The question everyone in Ankara is asking right now is: Are Turkish-Russian relations heading toward a messy divorce?

According to sources in Ankara, Turkish national intelligence chief Hakan Fidan and presidential spokesman Ibrahim Kalin traveled hastily and secretly to Moscow the night of Aug. 20 and met with their Russian and Syrian counterparts. These meetings have not been officially confirmed yet.

For the past six months, Moscow had argued that Turkey wasn't keeping the promises it had made during cease-fire negotiations. These promises included relaunching the M5 highway linking Idlib to Hama and the M4 connecting Aleppo to Damascus, clearing terror outfits from the demilitarized zone and having rebels surrender their heavy weaponry to Russian authorities.

On Aug. 5, the Syrian regime declared the cease-fire null, accusing Turkey of violating the truce. That day, Syrian forces — with the support of the Russian air force and special units led by the Syrian Arab Army's elite Tiger Forces — launched preparations for an offensive on Maraat Al Naman and the Khan Sheikhun area on the M5, immediately north of Turkey’s Morek observation post.

Ankara, aware of Syrian army preparations for the offensive, arranged for reinforcements to deploy around Turkish observation posts south of Idlib. But the clashes intensified last week. Under intense airstrikes and sustained attacks by the Syrian army, rebel forces were forced to withdraw toward the highway from the west. Just as the Syrian army was about to capture the Tal Nimr checkpoint just north of Khan Sheikhun on the M5 — which would have meant a siege would be laid to the Morek post — Ankara dispatched the big convoy (including the column that was bombed) in an attempt to prevent Syria's army from controlling the M5 and to prevent the Morek siege.

As of now, Ankara has not withdrawn from Morek, where it has 200 soldiers. The convoy and its 300 soldiers have reached the north of Khan Sheikhun.

But Turkey wasn't able to stop all of Syria's efforts. The Syrian army reached the M5 highway, severed the rebels' supply route and entered Khan Sheikhun. The rebels withdrew from locations at Kafr Zita, Morek and Merkaba.

Turkish Foreign Minister Mevlut Cavusoglu said Aug. 20, “The regime should not play with fire. ... As we have previously said, we will do whatever is necessary to ensure the security of our soldiers and observation posts. We hope it will not come to this point.”

In the current operational picture, one sees Syrian and Russian air forces and Turkey’s drone flights shifting northeast of Morek to Al Tamanah and Surman — the area hosting the No. 8 Turkish observation post. The pressure on the No. 6 Suran post is also likely to intensify.

What's certain for now is that Moscow is determined to sweep the rebels north until it fully controls the M5 and M4 highways.

“Attacks by Hayat Tahrir Al-Sham militants in Idlib will be crushed, Turkey has been notified about that,” Russian Foreign Minister Sergey Lavrov said Aug. 20.

Lavrov’s words imply that any Hayat Tahrir al-Sham-affiliated group south of Idlib and Aleppo are legitimate targets for Moscow.

In the meantime, is Turkey bargaining with Russia?

According to sources Al-Monitor contacted, Moscow wants Ankara to evacuate the Morek, Surman and No. 7 Tel Tukan posts and transfer all Turkish soldiers and pro-Turkey proxies to the Euphrates Shield pocket in the north — meaning Turkey's total withdrawal from southern Idlib province. However, Ankara has been resisting the Russian demands and offering instead to transfer those Turkish soldiers to other Turkish military outposts around Idlib.

Is the situation in northwest Syria the sole cause for discord between Ankara and Moscow?

I don’t think so. Moscow considers the possibility of the United States and Turkey creating a new power bloc in northeast Syria a distinct threat to the regime's strategy of imposing sovereignty on all its land. For Russia, the previously negotiated peace platform is essential to keep Turkey removed from American plans in Syria. Russia can't ignore the possibility of a US-Turkish partnership spilling over to the area east of the Euphrates.

Eyes are now on the new round of talks scheduled for September. For the time being, Russia — instead of insisting on comprehensive fulfillment of its entire gamut of choices — may settle for the evacuation of Morek, thus avoiding a full confrontation with Ankara. That attitude would eliminate the "messy divorce" option. But as the Syrian army turns its attention to reopening the M4 and M5 highways after fully securing Khan Sheikhun, and to targeting Maaret al Numan and Jisr al -Shughur, Russia will be pressing Turkey to implement the existing accord. This of course will mean six other Turkish outposts may meet the same fate as the Morek post.