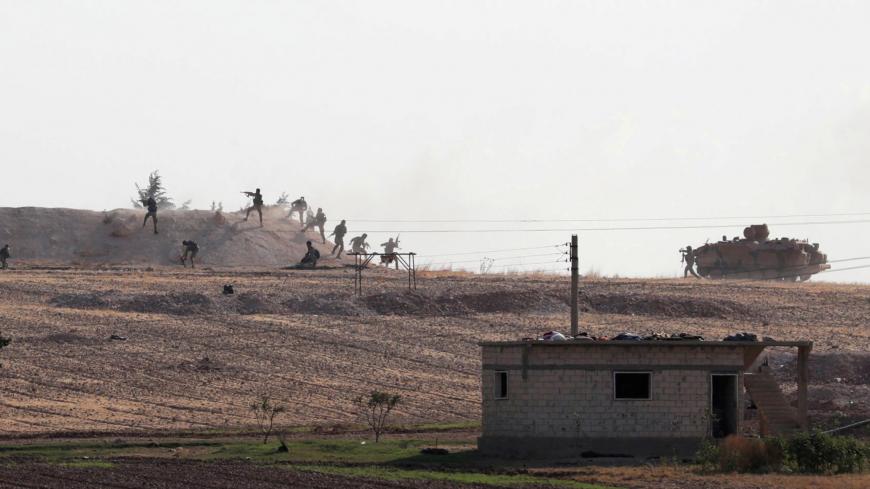 Turkey-backed Syrian rebel fighters are seen in action in the village of Yabisa, near the Turkish-Syrian border, Syria, Oct. 13, 2019. - REUTERS/Khalil Ashawi

ISTANBUL — Turkish-Russian relations are reeling after clashes between Turkish troops and Syrian forces that left dozens dead and many more wounded Monday in Syria’s northwest province of Idlib.

The exchange took place as Russian-backed troops loyal to Syrian President Bashar al-Assad continue an offensive in one of Syria’s last remaining rebel enclaves, where Turkish forces have established observation posts to deter escalation in a conflict that began during the 2011 Arab uprisings.

“Those who are testing Turkey’s determination with this kind of treacherous attack will realize they’ve committed a big mistake,” Turkish President Recep Tayyip Erdogan said before departing for Ukraine. “We can’t remain silent as our soldiers are martyred. We will continue to make them pay.”

While Ankara and Moscow have supported opposing sides in the war, the two have also collaborated on establishing multiple cease-fire agreements through talks in Astana, Sochi and most recently in Moscow last month. Yet the ongoing Idlib offensive has posed new challenges for leaders on both fronts and despite the assertive rhetoric and a slew of negative Russian media reports on Turkey since Monday’s clashes, observers expect relations to stabilize moving forward.

Ozgur Unluhisarcikli, director of the German Marshall Fund in Ankara, said recent developments will prove the resilience of cooperation between Erdogan and his Russian counterpart Vladimir Putin.

“I would not be surprised if this crisis is averted by a telephone conversation between Erdogan and Putin,” Unluhisarcikli told Al-Monitor.

“The Astana and Sochi peace processes have not been completely destroyed but have lately started to suffer and to lose importance,” Cavusoglu said at a press conference in Ankara. He added, “It is not possible for us to tolerate attacks targeting us. We have given the necessary response in Idlib and will continue to do so."

Cavusoglu said he had spoken with Russian Foreign Minister Sergey Lavrov to demand Moscow take additional measures to prevent future clashes between Turkish and Syrian forces. In a Facebook post Tuesday, the chair of the Russian upper house’s foreign affairs committee wrote Moscow was very alarmed by developments in Idlib and the strain they were putting on agreements between Russia and Turkey.

Questions remain over whether Ankara officials notified counterparts in Moscow before responding to an alleged attack from Syrian forces early Monday morning. While Russian officials said they did not receive communication prior to the clash, Omer Celik, chairman of Erdogan’s ruling Justice and Development Party, tweeted that the claim was false.

The Turkish broadcaster NTV also reported Turkish-Russian joint patrols in northeastern Syria had been canceled Monday, though it’s not clear whether the move is permanent.

Tension rose higher Monday during Erdogan’s visit to Ukraine, where he held a joint conference with Ukrainian President Volodymyr Zelensky to announce a free trade agreement and increased military assistance.

“The developments in Idlib have become intolerable. We have been very patient,” Erdogan said during the press conference. “Right now, nearly a million people are escaping toward our borders as a result of the regime’s barrel bombs and unfortunately due to Russia’s negligence.”

Erdogan reiterated a previous position not to recognize Crimea as Russian territory, calling Moscow’s 2014 annexation of the peninsula "illegitimate." Tthe two leaders' stated goals included boosting bilateral trade to $10 billion by 2023 and increasing cooperation on defense financing, in which Ankara will assist Kiev with $36 million in funding to buy Turkish military equipment.

Some critics claimed such developments, though arranged prior to Erdogan’s visit, appeared intentionally designed to draw ire from Moscow. Meral Aksener, chair of the opposition nationalist IYI Party, said without evidence that providing military aid to Ukraine might have caused the clashes in Syria.

“It was said that Turkey would give 200 million lira [$33.5 million] to Ukraine in aid,” Aksener said in Ankara Tuesday. “The same night, the night of Feb. 3, the Syrian army controlled by Russia, which is responsible for the occupation of Ukraine and Crimea, targeted Turkish soldiers. The game of chess at play here is clear: We give military aid, become a military target."

One clear outcome after Monday’s clashes has been a wave of negative media reports in Russian state news outlets aiming to smear Ankara. The news outlets alleged Turkey assisted al-Qaeda-linked militias in Syria and is now transferring Syrian fighters to Libya. Kerim Has, a Moscow-based analyst on Turkish-Russian relations, said negative coverage of Ankara’s activities in Libya started appearing in Russian news in December, but it has reached new levels this week.

“The state news outlets Ria Novosti and Tass published almost at the same time very detailed accusations of Turkey’s role in establishing the [Jabhat] al-Nusra terrorist group in Syria,” Has told Al-Monitor. He added, “It’s the first time I can remember such news reports since the 2015 downing of the Russian jet. … It means the Russian side was waiting for this moment to publish these files.”

Has said he expects the current tensions to subside with time and does not expect further escalation in rhetoric between Ankara and Moscow.

Speaking late Tuesday, Erdogan said Turkish troops would remain stationed at observation posts in Idlib and that his government would continue working toward de-escalating the conflict.

by Murielle KASPRZAK and Joseph SCHMID | AFP | May 26, 2022
END_OF_DOCUMENT_TOKEN_TO_BE_REPLACED