The Turkish and Russian leaders may be unhappy partners, but it is clear that they are committed to each other in Syria's Idlib. 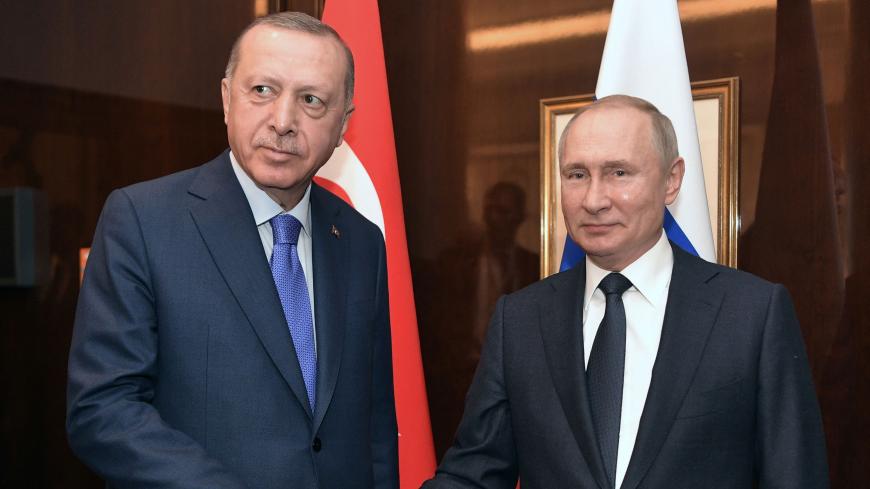 Russian President Vladimir Putin and his Turkish counterpart Recep Tayyip Erdogan shake hands during their meeting on sidelines of the Libya summit in Berlin, Germany, Jan. 19, 2020. - Sputnik/Aleksey Nikolskyi/Kremlin via REUTERS

Following his controversial visit to Ukraine, Turkey’s President Recep Tayyip Erdogan reached out to his Russian counterpart Vladimir Putin Feb. 4 to sort out differences on Syria and show that their partnership and cooperation endures.

For those aware of the nature and structure of the Turkish-Russian relationship, the move was predictable. Whatever the conflicting interests and visions of the two main players in Eurasian geopolitics, Erdogan cannot afford to alienate and confront Putin at this juncture.

Erdogan’s Feb. 3 visit to Ukraine was marked by symbolism and statements that drew Russia’s ire. His assertion of the illegitimacy of Russia’s annexation of Crimea, though not his first, was significant at a time when Russian-backed Syrian forces were gaining ground in Idlib, inflicting casualties on Turkish military personnel in the region. Erdogan also saluted the Ukrainian honor guard by saying “Slava Ukraine” (Glory to Ukraine), a slogan used by pro-Nazi Ukrainian nationalists during World War II. The current usage has anti-Russian connotations of Ukrainian nationalism for Moscow. Turkey’s commitment of some $34 million in military aid to Kyiv was another manifestation of the widening cracks between Turkey and Russia revealed recently by developments in Idlib.

The Turkish gestures to Kyiv crossed Russian red lines and, in turn, Turkey hit a Russian wall in Idlib. So Erdogan picked up the phone as soon as he was back to Ankara to reassure Putin of his faith in Turkey's partnership with Russia. He knew it was Russia that spearheaded the latest military offensive in Idlib that put Turkey’s military presence in jeopardy, but pretended that it was the Syrian government forces violating the principles agreed between Turkey and Russia in Sochi in September 2018.

Speaking on the morning of Feb. 5, Erdogan warned that Turkey would take military action against the Syrian regime unless it withdraws its forces behind Turkish observation posts by the end of February.

He was careful to disassociate President Bashar al-Assad’s regime from its Russian backer. Even before his speech in Ankara, Erdogan had unequivocally highlighted the importance of Turkey’s multifaceted relationship with Russia in remarks to a selected entourage of journalists on his way back from Kyiv. He emphasized Turkey’s energy dependence on Russia as well as the geopolitical value of their exclusive relationship. “Whoever gets up in rage sits down with a loss,” he said, using a Turkish proverb to signal that Turkey cannot afford a falling out with Russia.

However, amid high tensions over Syria, where eight Turkish military personnel were killed, the Russo-Turkish relationship is far from straightforward. My good friend and colleague David Gardner, the foreign policy editor of the Financial Times who has been watching the Middle East from Beirut for two decades, wrote in a Feb. 4 op-ed, “The twisted geopolitics of the Middle East may be taking another turn. Turkey has collided with Russia, its regional ally of convenience, in the Syrian cockpit that has previously helped Moscow bounce back as a subprime superpower and allowed Ankara to indulge its neo-Ottoman nostalgia. This story has long been triggering tremors, the epicentre of which is Idlib in north-west Syria.”

Nonetheless, Turkey’s collusion with Russia in Idlib does not mean that Turkey’s Syrian saga with Russia is over, nor Russia’s with Turkey. Although the Turkish-Russian partnership in Syria, a geopolitical alignment rather than an alliance, has limits, as evidenced by the recent developments in Idlib, it is far from expired. Moreover, the informal geopolitical alignment with Russia in Syria has proved to be more functional and preferable to Turkey over its formal alliance with the United States.

Therefore, a much-referenced op-ed by Burhanettin Duran in the Erdoganist mouthpiece Daily Sabah is more an aberration than an indication of a Turkish policy shift toward the West.

“President Recep Tayyip Erdogan, unhappy with repeated Russian violations of the cease-fire, made his disappointment public after Maaret al-Nouman fell to the Assad regime,” he wrote. The article reflects the frustration of the Erdoganist camp and the apparent disarray in Turkish foreign policy-making. The constant bashing of the United States and the West by the same hard-liner camp while praising the relationship with Russia until very recently is not lost in the memory of Turkey observers.

Neither Erdogan nor Putin can afford to end the geopolitical alignment, and neither has any interest in doing so.

“It’s hard for Putin to work with Erdogan, who strongly irritates him, but he hasn’t got any choice. Russia cannot operate in the Middle East if it’s in conflict with Turkey, otherwise it’ll face major problems,” former Kremlin adviser Gleb Pavlovsky was quoted as saying by Bloomberg.

On Feb. 6, the Russian Foreign Ministry released a statement on the situation in Idlib, stressing Russia’s commitment to cooperation with Turkey. “We reaffirm our commitment to the agreements and mutual understandings reached within the Astana format, providing for the need to fight terrorist groups in Syria with respect for the sovereignty and territorial integrity of the country,” it read.

The same statement, however, clearly endorses the Syrian government forces’ offensive in Idlib, which is proceeding to the detriment of Turkey’s military presence, with tacit criticism of the Turkish posture in Idlib. “The transfer of part of the armed formations from the de-escalation zone, first to the northeast of Syria and then to Libya, brought the concentration of radicals to a critical limit,” it said. “Under these conditions, government forces were forced to respond in order to protect hundreds and thousands of Syrians from terrorist outrage.”

If Putin is biting his tongue in dealing with Erdogan, Russia seems to be compelling Erdogan to swallow his threats regarding the military situation in Idlib.

In his Feb. 5 speech, Erdogan said, “At the moment, two of our 12 observation posts are behind the regime’s lines. We hope the regime will withdraw from our observation posts by the end of February. If the regime does not pull back, Turkey will be obliged to take matters into its own hands.”

As a matter of fact, after the government forces’ capture of Maaret al-Numan put the town of Saraqib on the line, Ankara had sent five military convoys, including 320 armored vehicles and heavy artillery, into Idlib. Saraqib, on the southern outskirts of Aleppo, lies on the junction of two strategic highways, M5 and M4, which connect Aleppo to the capital Damascus and Latakia, respectively.

If Erdogan remains true to his Feb. 5 warning, the siege — and ultimately the capture — of Saraqib is supposed to trigger a war between Russia-courted Turkey and Russia-backed Syria. Yet closer scrutiny of Erdogan’s statement might offer some relief. He expressed “hope” for the withdrawal of regime forces instead of issuing a specific threat, saying, “if the regime does not withdraw.” He also said that “Turkey will be obliged to take matters into its own hands” without elaborating, thus leaving Turkey's reaction ambiguous.

The Syrian regime's activity on the battleground may confirm assessments that it is interested in a speedy military solution to the Idlib issue to prevent a new Turkish-Russian deal on the region.

The military situation in Idlib is turning into a frantic race against time. It has become a testing ground for the limits of not only Turkey’s — or Erdogan’s — Syria policy, but also Putin’s role as the new power broker in Syria.