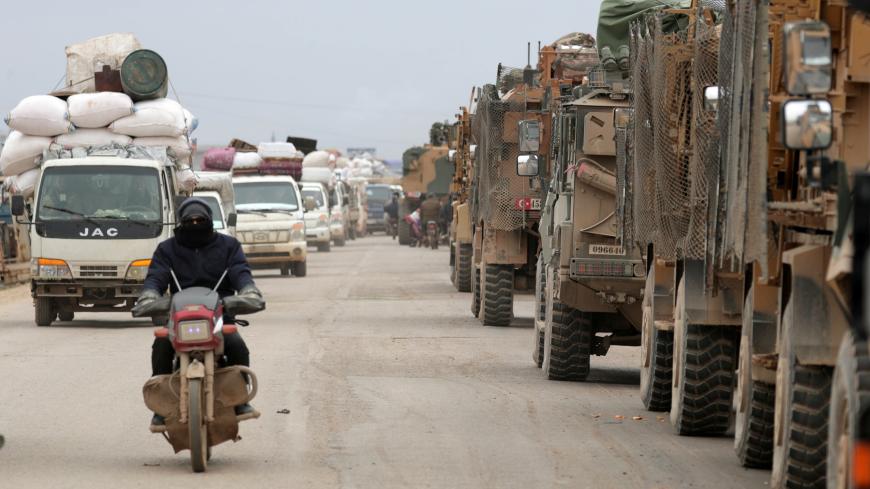 A man rides on a motorbike past Turkish military vehicles in Hazano near Idlib, Syria, Feb. 11, 2020. -

A sort of lunacy prevails in Ankara regarding Turkish foreign policy on Syria. The Turkish military casualties in Syria’s Idlib and the advances of the Russian-backed Syrian government forces have led the Turkish administration into a frenzy that betrays a lack of rationality and sobriety — two essentials in foreign policy-making.

Devlet Bahceli, the leader of the Nationalist Movement Party, is the quiet strongman of the current power distribution in Turkey. Without his support, Turkish President Recep Tayyip Erdogan would not have been able to win the 2018 presidential election, which paved the way to tighten his grip over the judiciary and the security establishment.

Bahceli has a reputation for virulent speeches, but his latest talk on Feb. 11 was one of the weirdest. Bahceli called on Erdogan to “conquer” Damascus to take revenge against the Syrian regime after the Turkish death toll in Idlib reached 14.

“The Turkish nation should go into Damascus,” he said in an address to his parliamentary group. “Let’s burn down Syria; let’s demolish Idlib.”

The following day, Erdogan warned that Turkey will strike Syrian government forces “anywhere” if any more Turkish soldiers are harmed in the last rebel bastion. Erdogan’s remarks came just after his phone conversation with his Russian counterpart Vladimir Putin on Feb. 12.

While Erdogan was issuing these warnings, his cronies had already declared war against the Syrian government. The editor-in-chief of the pro-government daily Yeni Safak declared Syria a war zone from “Aleppo to Qamishli.”

"Everywhere from Latakia and Aleppo to Qamishli is a target. The operation era is now over. The war era has started,” staunch Erdoganist Ibrahim Karagul wrote Feb. 12 even before Erdogan’s speech.

Defense Minister Hulusi Akar manifested a similar rage during his interview with The Associated Press on Feb. 11, a day before a NATO defense ministers meeting in Brussels. He said Turkey expects NATO and Europe to take “concrete” steps against the Syrian government’s offensive in Idlib.

Though a member of NATO, Turkey has been seen as a Russian Trojan horse among the ranks of the transatlantic alliance due to its partnership with Russia.

In the Idlib escalation, however, Russia is supporting the recent push by Syrian President Bashar al-Assad’s forces regardless of its partnership with Turkey. Moscow also accuses Turkey of failing to deliver on its commitments to clean Idlib of radical elements under a 2018 deal between Turkey and Russia.

The United States, for its part, is apparently trying to take advantage of the cracks between Ankara and Moscow to lure Turkey to its side. Secretary of State Mike Pompeo voiced his support for Turkey’s actions in Idlib and US special envoy for Syria James Jeffrey traveled to Ankara for talks.

Jeffrey described the Turkish soldiers killed in shelling by Syrian government forces as “our martyrs,” speaking in broken Turkish on his arrival in Ankara on Feb. 11. The United States supports Turkey’s “legitimate interests” in Idlib, the envoy said in an interview with a Turkish television station Feb. 12.

“Washington, of course, traditionally blames Russia for the Turkish problems associated with the deaths of military personnel,” reported a Russian news outlet. “Erdogan needs a victory that he cannot achieve on his own; ... abandoned by NATO partners, in this situation it remains only to seek support from Russia.”

The Russian side seems to be ignoring the fiery rhetoric of the Turkish leadership regarding the military situation in Idlib.

“In reality, the positions of the Turkish troops in Idlib are located in such vulnerable locations that even Assad’s army — exhausted by the years of war — can inflict a crushing blow on them,” reported Vzglyad, an online Russian news outlet owned by Russian politician Konstantin Rykov, a staunch supporter of Putin.

The Russian side seems undeterred by a flurry of frenzied statements pouring out of Ankara. The Russian Foreign and Defense Ministries have been persistently blaming Ankara for the deteriorating military situation in Idlib, reminding everyone of Turkey’s failure to fulfill its commitments in the 2018 Sochi deal, including to set up a demilitarized zone in Idlib and remove radical elements from the area.

For the Russian Defense Ministry, the cause of the crisis in Idlib is the “failure by Turkish colleagues to separate militants from the moderate opposition from terrorists who filled these areas.”

The Turkish side, meanwhile, is focusing on a different provision of the agreement, which stipulates that Russia “take all necessary measures to ensure that military operations and attacks on Idlib will be avoided.”

It is unrealistic to think that the Syrian government forces, after gaining ground that amounts to some 600 square kilometers (370 square miles) in Idlib province, will withdraw from the de-escalation zone until the end of February — a deadline set by Erdogan.

As long as Russia does not look the other way — and that seems almost impossible — Turkey will have to change the red lines it has expressed through frenzied rhetoric.

Assuming that the neurosis displayed by Ankara is actually aiming to raise the stakes for Moscow for a cease-fire in Idlib, can it be safely said that there is no serious danger of an all-out Turkish-Syrian war? After all, in Ankara’s calculations, Russia cannot afford to return to November 2015, when the ties between Moscow and Ankara took a nosedive after a Russian jet was shot down by Turkey. Or could it?

With the loss of rationality in Ankara, it is not possible at this juncture to answer these two questions.

For the International Crisis Group, “Erdogan’s words were no idle chatter. … The risk of a direct Turkish-Syrian confrontation, or even a Turkish-Russian one, is rising.”

Therefore, one cannot know how the situation in Idlib will unfold in the near future. Wars sometimes erupt as unintended consequences of ill-conceived or irrational decisions and nowadays, panic is prevailing in Turkish leadership.