Turkey’s predicament in Idlib has laid bare its weaknesses and the longstanding inconsistencies in its foreign and security policy as never before, boding adverse repercussions for the government, both at home and abroad. 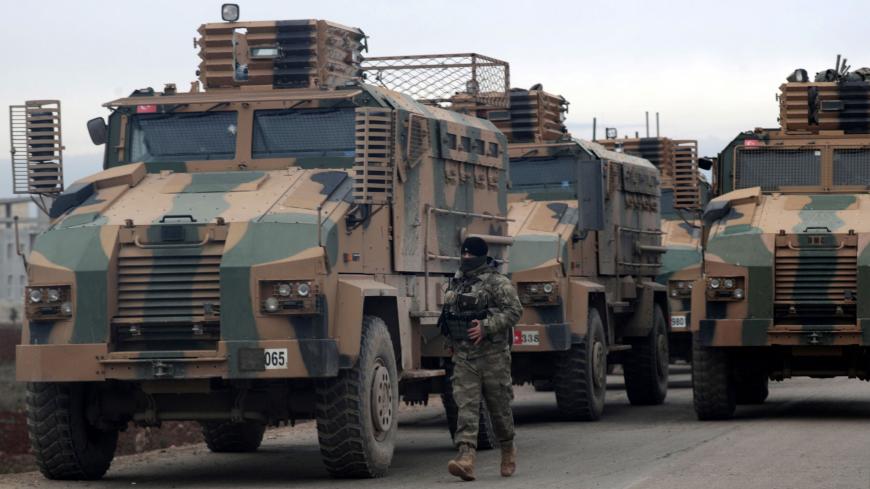 After the number of Turkish military personnel killed in Idlib climbed to 13 earlier this month, President Recep Tayyip Erdogan unequivocally declared that Turkey would attack Syrian forces anywhere in Syria if another soldier were hurt.

Erdogan had already issued an ultimatum to Syria to withdraw to the lines set in the Sochi memorandum, which he signed with Russian President Vladimir Putin in September 2018. If not, Turkey would unleash a war against the Syrian army to oblige it to pull back. The International Crisis Group (ICG), a transnational organization committed to preventing and resolving deadly conflicts, was alarmed. In a report titled “The eleventh hour for Idlib,” it suggested that Damascus and its Russian backers should immediately conclude a cease-fire with rebel forces enjoying robust Turkish military support. For ICG, “Erdogan’s words were no idle chatter.”

But “Damascus and its Russian backers” seemed to have a different assessment. For them, Erdogan’s words did sound like an idle chatter.

On Feb. 22, Turkey lost its 16th soldier in Idlib, following the killing of two Turkish soldiers Feb. 20 in a Russian airstrike that left many others wounded. The latest loss coincided with the killing of high-ranked Turkish officers in Libya by Khalifa Hifter’s forces, which are collaborating the Russian Wagner group against the Erdogan-backed Tripoli regime led by Fayez al-Sarraj.

Despite all of Erdogan’s signals that he would play tough in domestic politics and allow no dissent against his Syria and Libya policies, the Turkish president displays an apparent weakness vis-a-vis Russia, whose air support has enabled Damascus to regain large swaths of territory in Idlib province and around Aleppo. The relentless bombardment of Russian warplanes has shown also that, if need be, they would not spare the Turkish forces on the ground.

Yet, neither Erdogan nor his defense minister, Hulusi Akar, is keen to confront Russia. Asked whether Turkish and Russian soldiers might face each other in Idlib during a TV interview Feb. 20, Akar said, “We have no intention or aim to confront Russia. We have made every effort to avoid [such a confrontation] and we will continue to do so. What we are after is [to ensure] that the regime adheres to the cease-fire, halts its aggression, ends its massacres and thus prevents radicalization and migration.”

The Turkish press has reported that Turkey asked the United States for aerial support over Idlib and is seeking Patriot missiles for air defense. This is another in a string of unprecedented inconsistencies in Turkish foreign and security policy displayed recently and becoming almost routine. It was the Turkish leadership’s resolve to acquire Russian S-400 air defense missiles that soured the relationship with the United States last year. Now, after paying $2.5 billion to Russia for the weapons, Ankara is seeking American Patriots against Russia’s air support for Syrian regime forces advancing on Syrian territory in Idlib.

Despite Akar’s statements and Erdogan’s direct contact with Putin, is there such a risk that would betray any wisdom and sobriety of mind?

It cannot be ruled out as long as Turkey continues to send enormous amounts of armor into a relatively narrow strip of land in Idlib. It is an area that the Syrian regime is determined to regain to end once and for all the last bastion of the Syrian Salafist-jihadist opposition of Hayat Tahrir al-Sham, a former al-Qaeda affiliate.

From Feb. 2 to Feb. 22, the Syrian Observatory for Human Rights monitored the entry of more than 2,700 trucks and military vehicles to Syrian territory, including tanks, personnel carriers, armored vehicles, mobile bulletproof guard booths and military radars. The number of Turkish soldiers deployed to Idlib in the same period exceeded 7,400.

At this very juncture, the Turkish deployment in Idlib amid the ongoing operations of Syrian government forces, backed by Russian air support, and the expanding presence of Iranian fighters on the ground, is enough to spark a conventional war of unmeasurable magnitudes.

The seminal work of University of Cambridge historian Christopher Clark, “The Sleepwalkers: How Europe Went to War in 1914,” offers a brilliant narrative of how Europe’s great powers stumbled into a war that they had no intention to be involved in. There are also scores of well-documented accounts on how the 1967 Six-Day War, which has shaped the map and the politics of the Middle East ever since, flared up against the actual intentions of its protagonists — Egypt, Syria, Jordan and Israel.

Therefore, despite Akar’s statements and the open channels between Erdogan and Putin and their respective agencies, a devastating war involving Turkey, Russia and their Syrian proxies might not be averted in Idlib. This brings to mind a natural question: How come Turkish decision-makers could be so reckless in what they are doing while the Syrian air space is closed to Turkish aircraft and the Syrian army’s ground operations in Idlib are backed by massive and continuous Russian bombing of Damascus’ adversaries?

How can Erdogan hope for a military success to undo all those gains of the regime, given the apparent asymmetry between the Turkish buildup in Idlib and Russia’s firepower firmly behind the Syrian forces? In the most plausible answer to date, a Haaretz op-ed states, “One might be forgiven for thinking that Turkey’s recent attempts to go it alone in international military adventures, from Syria to Libya, have been an unmitigated disaster. In those conflicts, Turkey is either supporting a losing side, or contributing to a stalemate. However, Ankara’s priority in Syria and elsewhere is not necessarily to back a winner. Its aim is to carve a stake in its near abroad, and to ensure that other powers sufficiently recognize Turkish interests.”

However, the developments over the past week indicate that, even in this respect, Turkey appears to be a loser.

Erdogan pins his hopes on the four-way summit he announced he would hold March 5 with Putin, German Chancellor Angela Merkel and French President Emmanuel Macron. That means the deadline he gave for the withdrawal of Syrian forces by the end of February will not be respected. Furthermore, the fate of the summit still remains an open question as the Kremlin announced Feb. 25 that they are not interested in the four-way summit.

Judging by the developments on the battlefield, it is highly possible that Turkey will lose more ground in Idlib despite its massive military deployment and Syrian allies. The Russian-backed Syrian forces will try to establish control over the M4 highway that links Aleppo to Latakia on the Mediterranean coast.

The developments regarding Idlib have proved the fallacy of Turkey’s calculations that holding on to Idlib will lead international powers to recognize its interests.

Turkey’s Western allies, to Ankara’s dismay, have manifested they will not go as far as to give Turkey efficient military assistance to turn the tide in Idlib. For Turkey, being undermined militarily in Idlib means being deprived of the prospect of using Idlib as a bargaining chip to secure its interests in the predominantly Kurdish territory along its border in northeastern Syria.

Turkey’s predicament in Idlib has exposed its weakness and the longstanding inconsistencies of its foreign and security policy as never before. In the eyes of its partner Russia and Western allies, Turkey appears dragged into an unwinnable situation, becoming more subservient to them to realize its expectations and objectives.

Also, the Idlib escalation has put an end to dreams of a strategic partnership with Russia, entertained by Erdogan’s Eurasianist allies in Turkey. It underscores once again that relations with Russia cannot be other than transactional as they used to be in the past.

Most importantly, Turkey’s Idlib predicament illustrates the unsustainability of the Erdoganist foreign and security policy. No doubt, it will bear on Turkey’s internal balance of power. It will take some time to see exactly when and how.