Turkey and Azerbaijan often describe their relationship as “one nation, two states,” but their economic exchanges have remained relatively small despite their close political and ethnic bonds. 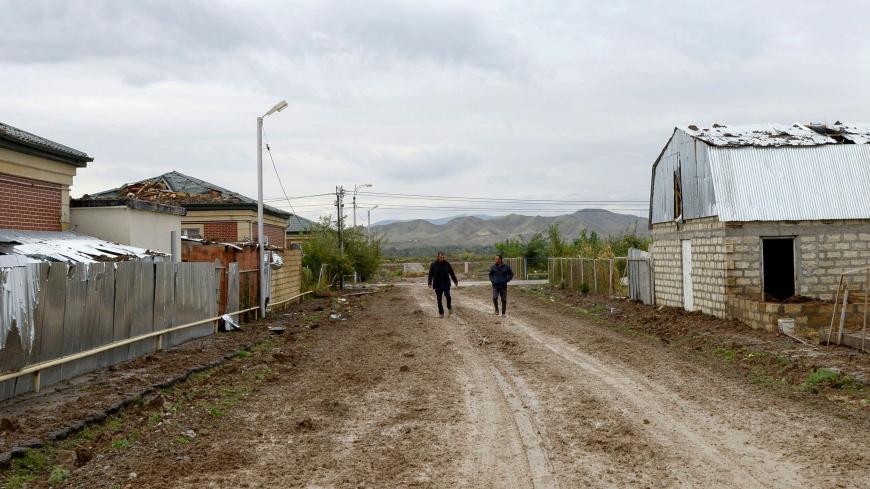 Men walk on a street of the village of Djojugh Marjanli in Azerbaijan's Jabrayil district, said to have been damaged in shelling during the ongoing fighting between Armenia and Azerbaijan over the breakaway Nagorno-Karabakh region, Oct. 6, 2020. - TOFIK BABAYEV/AFP via Getty Images

Turkey has openly thrown its weight behind Azerbaijan in the Azeri-Armenian flare-up over the long-disputed enclave of Nagorno-Karabakh, in what is widely believed to be an attempt to extract concessions from Russia, the “big boss” of the region, in simultaneous conflicts in Libya and Syria. On the other side of the coin, however, Ankara hopes to gain influence over the energy resources of Azerbaijan, with which it has close political and ethnic bonds.

Azerbaijan’s oil and natural gas potential has yet to be fully developed and utilized. Moscow has traditionally steered the country’s energy wealth, both before and after the dissolution of the Soviet Union in 1991. Russia has maintained partnerships with Azerbaijan in various fields, chief among them energy and defense. The Russian energy giants Gazprom, Lukoil and Transneft operate in Baku and Russians wield influence in Azerbaijan’s state-owned energy company SOCAR, which, in turn, holds a nearly 10% stake in the Russian oil refinery Antipinsky. Turkish President Recep Tayyip Erdogan is purportedly keen to gain influence in the Caucasus, but will Moscow allow a rival player in its backyard?

The clashes between Azerbaijan and Armenia flared up in late September, threatening to spill over beyond traditional theaters of war into Azeri cities and Armenian territory. Much of the punditry remains focused on what Moscow will do. Though Russia has been uncharacteristically low key thus far, it sees Armenia as a natural ally and Armenia is limited in what it can do without Russian acquiescence.

The Minsk Group of the Organization for Security and Cooperation in Europe, co-chaired by Russia, France and the United States, has been the main mediation platform in the Nagorno-Karabakh conflict. The three-decade settlement efforts, however, have proved futile. Since the latest flare-up, the Minsk Group has sought to convince Azeri President Ilham Aliyev to agree to a cease-fire, but Ankara’s ambitions and its backing for Baku have emerged as a new factor that can hardly be ignored.

Armenia, which has a population of some 3.5 million, is economically weak, relying on support by Russia and an influential Armenian diaspora in Europe and the United States to stand on its feet. The country’s gross domestic product per capita was less than $4,000 in 2019. Turkey has contributed to Armenia’s economic plight by keeping the border between the two countries sealed. The two crossings on the 325-kilometer (200-mile) frontier — Armenia’s gateway to the West — were shut in 1993 as a gesture of solidarity with Azerbaijan after Armenian forces seized Nagorno-Karabakh, an Azeri territory with an ethnic Armenian majority.

About 1 million Azeri nationals traveled to Turkey in 2019, while the number of Armenian visitors has stood at less than 60,000 per year, with most of them coming via Georgia to work in unregistered jobs in Istanbul, reportedly often at businesses owned by Turkey’s ethnic Armenians.

The Azeri economy relies heavily on the production and export of energy. The country produces about 800,000 barrels of crude oil per day in normal times, which makes it the world’s 23rd largest oil producer. Most of the oil is exported to other countries. With about 7 billion barrels of proven oil reserves, Azerbaijan ranks 18th in the world in terms of oil wealth. Its natural gas reserves amount to 991 billion cubic meters, the 25th largest in the world. In normal times, the country produces 17 billion cubic meters of gas per year. Given these figures, Azerbaijan ranks as a medium-size country in terms of energy wealth and enjoys good prospects to grow richer by making better use of its potential.

The country’s population numbers some 10 million and has a GDP per capita of about $5,000 — a figure that hardly reflects its natural riches. Azerbaijan’s energy-dominated exports are worth some $15 billion per year, with Turkey second only to Italy among the top buyers. Azerbaijan’s imports, meanwhile, amount to about $10 billion, with Russia holding the largest share.

Energy resources are clearly at the core of Azerbaijan’s appeal to foreign investors and the mainstay of its economic development potential. Baku is keen to move forward by reducing its reliance on Russia; hence it is looking for Turkish and European support. Like other energy producers, Azerbaijan has felt an immediate impact from global economic volatilities in recent years, experiencing economic turmoil and a hard-currency crunch and even seeking assistance from the International Monetary Fund.

Following its troubled ventures in the Middle East and the eastern Mediterranean, Ankara’s quest for greater regional power seems to be taking it to the Caucasus now, right in Russia’s backyard.

Turkey and Azerbaijan often praise their relationship as “one nation, two states,” but the economic aspect of their ties has been relatively lackluster thus far. Exports to Azerbaijan, including military sales, represent only 1.3% of all Turkish exports. Turkey’s energy purchases from Azerbaijan remain relatively low as well, mainly because of its long-term contracts with Russia and Iran. Turkey’s imports from Azerbaijan were limited to $411 million last year, while its exports were worth $1.8 billion.

Turkish direct investments in Azerbaijan had once hit $8 billion a year, but were down to $325 million last year, according to central bank data, showing how the Turkish business world’s Azeri dreams had quickly waned.

In contrast, Azeri direct investments in Turkey stood at nearly $6 billion in 2019, accounting for 4% of the foreign direct investment stock in the country. The main investments belong to SOCAR. The company debuted in Turkey in 2008 when its Turkish subsidiary, SOCAR Turkey Enerji, acquired a 51% stake in Turkey’s petrochemical company Petkim. SOCAR owns an array of other energy enterprises in the country and is the majority stakeholder in the Trans-Anatolian Natural Gas Pipeline — a major project completed last year to carry Azeri gas to Europe via Turkey. The company says its investment stock in Turkey will reach $19.5 billion once all ongoing investments are completed.

The predominance of Shiite Islam in Azerbaijan may not be exactly to the liking of Turkey’s government, but Erdogan's ambitions aim at stronger bonds with Baku and increased cooperation in the development and marketing of Azerbaijan’s energy wealth. Whether Ankara can turn the Azeri-Armenian crisis into an opportunity despite Russian and Iranian clout in the region remains to be seen.