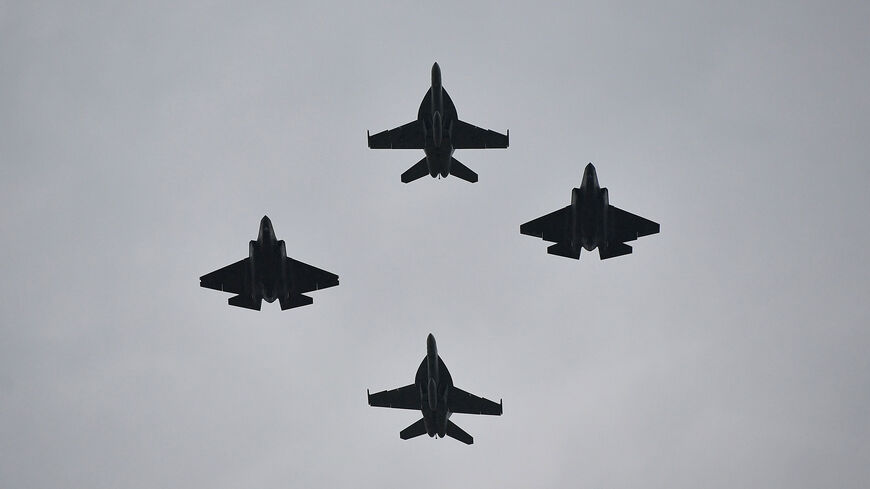 Two F-35s (L and R) and two F-18s fly overhead during the "Salute to America" Fourth of July event at the Lincoln Memorial in Washington, DC, July 4, 2019. - MANDEL NGAN/AFP via Getty Images

The formal letter of request was not related to a Trump administration push to convince regional governments to recognize Israel, according to one of Reuters’ sources.

Al-Monitor could not independently confirm the report. Qatar’s embassy in Washington did not immediately return Al-Monitor’s requests for comment.

A spokesperson for the US State Department cited policy in declining to comment on potential foreign military transfers of which Congress has not yet been notified.

Why it matters:  Only a handful of US allies have been granted access to the highly advanced F-35. The Trump administration floated the possibility of also selling the aircraft to the United Arab Emirates amid talks over the UAE’s recognition of Israel earlier this summer.

Reports that Israel’s Prime Minister Benjamin Netanyahu was aware of the offer sent a shock through the Israeli defense establishment and raised eyebrows on Capitol Hill. Under the 2014 US-Israel Strategic Partnership Act, presidential administrations are required to certify that any major defense sales to Middle Eastern goverments will not adversely affect Israel’s qualitative military edge in the region.

Qatar does not have formal ties with Israel, although it is home to the largest US military base in the Middle East. The UAE and Bahrain formally opened ties with Israel last month amid a White House initiative dubbed the “Abraham Accords.”

What’s next:  Though the US has sold billions in F-15s and Apache helicopters to Qatar over the last few years, an F-35 request is less likely yield results.

On top of concerns over Israel’s qualitative military edge, Qatar is also the target of a dispute with Saudi Arabia and other Gulf neighbors.

The Trump administration has aimed to shore up Gulf countries’ security and military capabilities amid Iran’s emerging regional ambitions, but selling the F-35 to Qatar would likely exacerbate tensions with Riyadh, which does not possess the aircraft.

Know more:  Read Danny Zaken’s report on the opportunities that a potential F-35 sale to the UAE could open up for Israel’s defense manufacturers.