Israel’s Prime Minister Benjamin Netanyahu on Tuesday denied reports that his government’s historic agreement with the United Arab Emirates included a potential US sale of F-35 fighter aircraft to the UAE in exchange for the Gulf country’s recognition of the Jewish state. 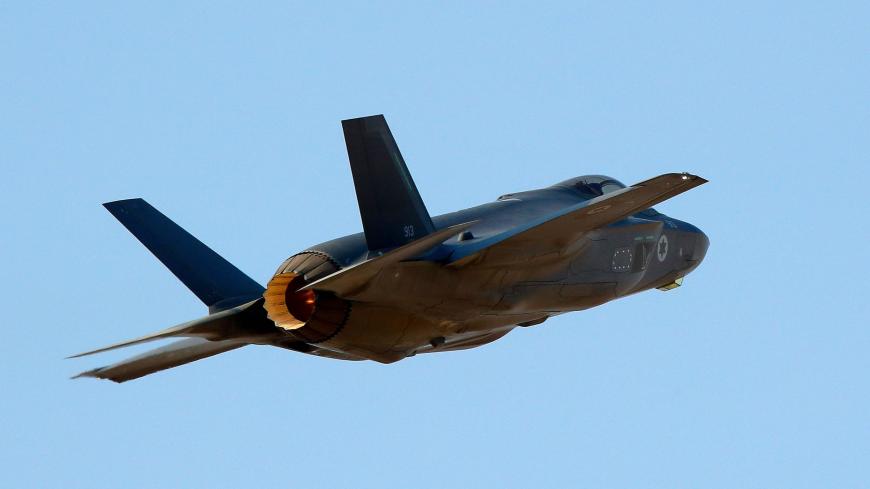 An Israeli F-35 I takes part in the "Blue Flag" multinational air defense exercise at the Ovda air force base, north of the Israeli city of Eilat, on Nov. 11, 2019. - JACK GUEZ/AFP via Getty Images

Israel’s Prime Minister Benjamin Netanyahu on Tuesday denied reports that his government’s historic agreement with the United Arab Emirates (UAE) included a potential US sale of F-35 fighter aircraft to the UAE in exchange for the Gulf country’s recognition of the Jewish state.

“Israel did not change its consistent positions against the sale to any country in the Middle East of weapons and defense technologies that could tip the balance” of military power in the region, Prime Minister Benjamin Netanyahu said Tuesday.

Netanyahu’s statement came amid rumors that a “secret clause” in the agreement allowed the UAE to purchase the advanced fighter jet, which only Israel possesses in the region as part of a US policy favoring Israel’s military superiority in the region.

The prime minister’s office firmly shot down the claim Tuesday, saying he and Israeli Ambassador to the US Ron Dermer repeatedly made clear to US officials their opposition to the sale of F-35s to other Middle Eastern countries in recent months.

“The peace agreement with the United Arab Emirates does not include any reference to arms sales, and the US has made it clear that it will always take strict care to maintain Israel's qualitative edge,” the statement released by Netanyahu’s office read.

Citing anonymous US and Emirati sources, Israel’s Yedioth Ahronoth newspaper reported Tuesday that the Trump administration offered the UAE a “giant” sale of US F-35 Joint Strike Fighters and advanced drones in order to sweeten the deal.

Al-Monitor could not independently verify Yedioth Ahronoth's reporting. A State Department spokesperson declined to comment on “potential or pending arms sales before they are formally notified to Congress.”

Why it Matters:  Though the reports remain unconfirmed, the UAE has urged Washington and Israel in the past to allow it to buy advanced US weaponry. President Donald Trump is known to push US weapons sales in discussions with foreign leaders, according to sources familiar with the matter.

American presidential administrations are obligated to notify Congress and discuss with Israeli officials prior to selling advanced weapons to Middle Eastern countries. The latter rule is part of Washington’s policy of maintaining Israel’s “qualitative military edge,” or QME, in the region.

Congress has barred major US weapons sales to the UAE over the Gulf country’s involvement in Yemen’s civil war, though the administration has been skirting that freeze without proper procedures, a recent watchdog report found.

The Trump administration is under pressure to sell US arms in the region, both from its own ideology and increased deals by Russian and Chinese firms.

The Trump administration last month changed its interpretation of an international agreement so that it could sell armed drones to governments abroad in order to compete with Chinese manufacturers who sell to the United States' Gulf partners like the UAE and Saudi Arabia.

What’s Next:  Trump adviser Jared Kushner hinted yesterday that there is still more work to do on the UAE’s agreement with Israel.

Netanyahu has said the agreement only stipulated a temporary halt to his plans to annex parts of the West Bank, though UAE officials are reportedly banking on Trump losing the November US presidential election in hope that a Joe Biden administration would make Netanyahu’s concession permanent.

Know More:  Danny Zaken explores the economic motives behind the UAE-Israel deal, and Al-Monitor’s Ben Caspit looks at what the agreement means for the wider region moving forward.