After meeting Esper, Gantz says US committed to Israel’s security

It took three meetings between US Secretary of Defense Mark Esper and Israel’s Defense Minister Benny Gantz to convince the latter to drop his opposition to the F-35 sale to the United Arab Emirates. 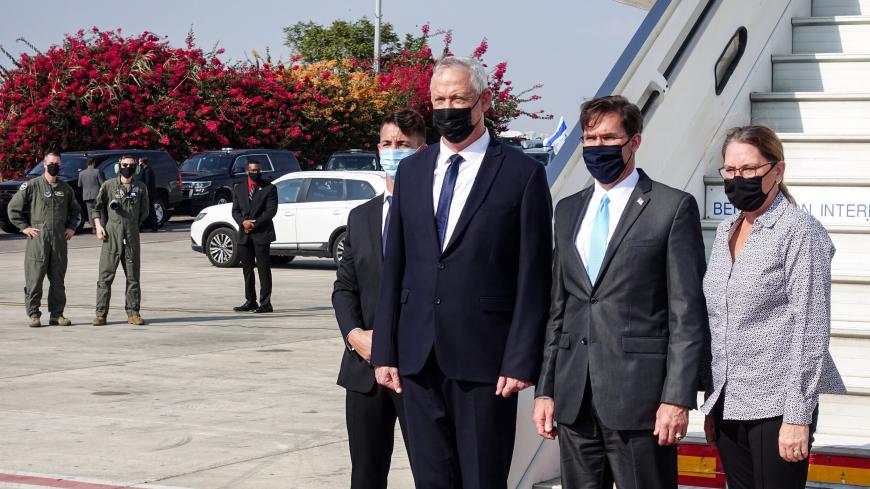 US Secretary of Defense Esper stopped in Israel for a few hours yesterday on his way back from India, meeting separately with Prime Minister Benjamin Netanyahu and Defense Minister Benny Gantz. Before the meetings, Esper was shown an Iron Dome missile defense battery that had recently been produced by the Israeli Rafael company for the US military. US-born Israeli Air Force officer Lt. Tova Winick gave Esper a tour of the system.

After the Iron Dome tour, Esper and Gantz met at the Defense Ministry in Tel Aviv with Defense Ministry director Amir Eshel and IDF Chief of Staff Aviv Kochavi. According to Gantz’ office, “They discussed the imperative to maintain regional security and stability and to confront Iran."

After the meeting, Gantz said, "The joint declaration we signed last week means that Israel will have the tools it needs to contend with aggressive and destabilizing forces, making it an even more effective ally to the US and creating the conditions for peace to prosper.’"

Gantz also tweeted, "As Israel’s defense minister, I tell you this evening that the US remains committed to Israel’s security and to its qualitative and technological edge in the Middle East. In my meetings with senior officials in the administration — chief among them Secretary of Defense Esper — we made sure to guarantee Israel’s security for several future decades and to enhance it."

Esper's visit was his third in-person meeting with Gantz in just over a month. On Oct. 22, Esper and Gantz met at the Pentagon and signed an agreement confirming Washington's strategic commitment to Israel’s military superiority in the Middle East. Gantz had visited Washington also on Sept. 21, focusing on the Iranian threat and on the US push for snapback sanctions.

Yesterday’s visit came on the backdrop of the announcement by the Donald Trump administration to Congress of its intention to sell F-35 stealth jets to the United Arab Emirates as well as a large-scale military drill carried out by the IDF in the north of Israel.

The Oct. 25 drill, called “Deadly Arrow,” simulated a war with Hezbollah. While inspecting the military exercise, Gantz said, "Lebanese citizens need to know that Hezbollah is their problem, not the State of Israel. If Hezbollah acts against the State of Israel, Lebanon, in the end, will pay the price and we’re here to be prepared for a moment I hope will not come."

Ever since Trump's Aug. 13 announcement that Israel was normalizing relations with the Emirates, Gantz has expressed concern over the sale of advanced weapons to the Emirates and perhaps also to other Arab states. Still, on Oct. 23, after Gantz returned from Washington, he and the prime minister issued a joint statement indicating Israel won’t oppose the sale of "certain weapons systems" to the Emirates.

In previous weeks Netanyahu had denied reports that he knew about the American intention to sell the F-35 to the Emirates and that he had given tacit approval for such a deal. In an apparent allusion to Iran, Netanyahu said after his meeting with Esper, "We all face a common threat. But with that said, it was important that the defense establishment received this clear American undertaking to preserve our qualitative military edge."