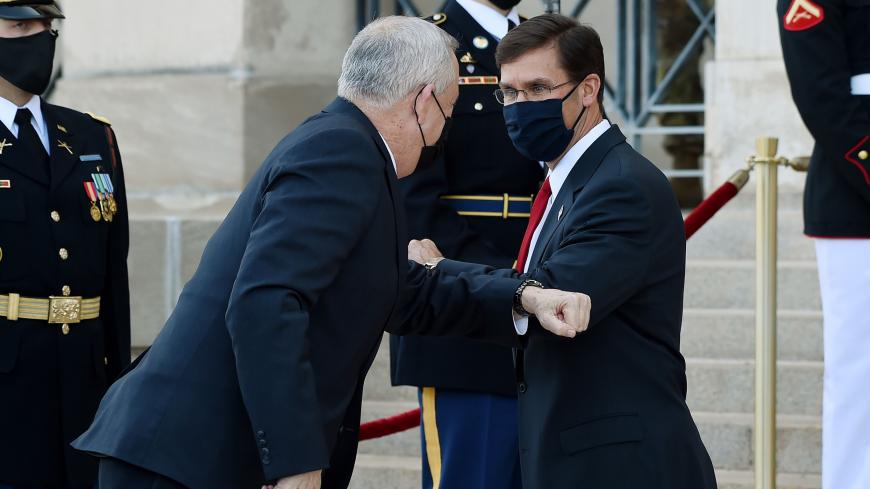 US Secretary of Defense Mark Esper (R) welcomes Israeli Defense Minister Benny Gantz during an honor cordon at the Pentagon on Sept. 22, 2020, in Washington. - OLIVIER DOULIERY/AFP via Getty Images

“The defense relationship between the US and Israel has never been stronger. And we intend to keep it that way,” Esper said.

Al-Monitor had earlier reported that Gantz was likely to request that Israel be given additional hardware to ensure its military edge, and that it be given the option to sell advanced US-Israeli drone technology to the UAE.

Reuters reported Tuesday that US officials are exploring ways to enable Israeli radar to detect the UAE’s potential future F-35s, but could not determine whether that meant modifying Israeli systems or the F-35s.

The United States is reportedly hoping to have an agreement signed by UAE National Day on Dec. 2.

Israel’s Ynet news reported that Gantz arrived in Washington seeking additional US military hardware to compensate for the proposed UAE sale, including expediting an existing $2.4 billion sale of KC-46 refueling aircraft and future access to the new F-15 EX, an updated variant of the F-15 with larger payload capacity and updated electronic systems.

Gantz on Tuesday emphasized the centrality of Washington militarily favoring Israel to the two countries’ relationship.

“It is in our interest to share with you anything we can possibly share, and we will continue those relations into the future,” he said. “We see both as a privilege but also as a … strategic necessity. And we’re going to make sure it stays like this.”

Iran’s increased military adventurism in the region is one reason for closer defense and intelligence coordination between the United States and Israel in recent years.

But a number of Israeli officials vocally criticized the US offer to sell the F-35 to the UAE amid negotiations aimed at getting Abu Dhabi to normalize relations with Israel.

The defense minister opened his trip to Washington on Tuesday with a meeting with Kushner, who is leading efforts to convince Arab states to recognize Israel ahead of the Nov. 3 US presidential election.

Last week the foreign ministers of the UAE and Bahrain signed their countries’ normalization agreement with Israel alongside Israeli Prime Minister Benjamin Netanyahu at the White House.