Intel: Netanyahu knew of US proposal to sell arms to UAE, says NYT

Israeli Prime Minister Benjamin Netanyahu was aware of a US proposal to sell the advanced F-35 fighter jet to the United Arab Emirates amid negotiations with the Gulf country over normalizing ties with Israel, the New York Times reported Thursday. 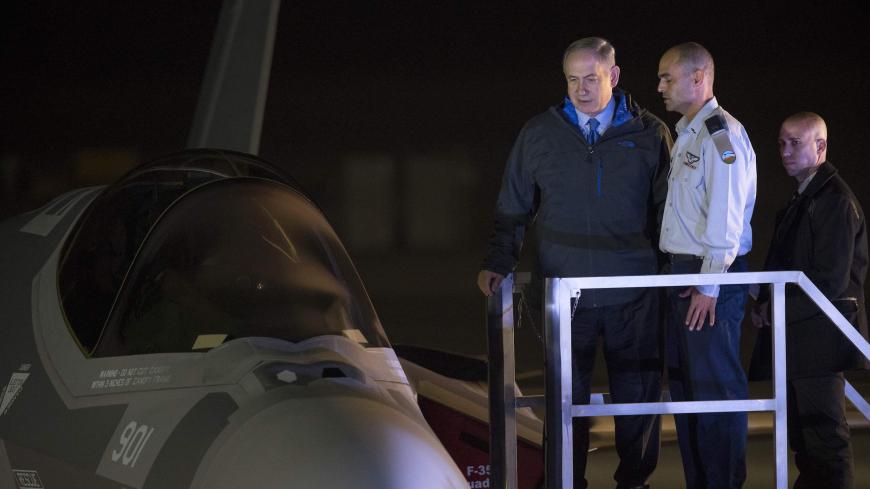 Israeli Prime Minister Benjamin Netanyahu (3rd R) look at one of the first two F-35 stealth fighter jets purchased in the United States next to its pilot (2nd R), an Israeli officer, after he landed on Dec. 12, 2016, at the Israeli Nevatim Air force base in the Negev desert, near the southern city of Beersheva. - JACK GUEZ/AFP via Getty Images

Israeli Prime Minister Benjamin Netanyahu was aware of a Donald Trump administration proposal to sell the advanced F-35 fighter jet to the United Arab Emirates amid negotiations with the Gulf country over normalizing ties with Israel, the New York Times reported Thursday.

The news follows similar reports in the Israeli media and comes weeks after Israel’s Yedioth Ahronot newspaper reported that a secret clause in the agreement included the possibility of the UAE being allowed to purchase the F-35s.

The New York Times on Thursday cited anonymous officials as saying Netanyahu’s public statements on the matter were false, and that the prime minister tacitly approved the proposal in hope of seeing the UAE recognize Israel. The paper did not identify the nationality of the officials.

Why it matters: The story follows a series of similar revelations by the Israeli press that threaten to tarnish the deal, which Netanyahu is banking on to secure his legacy.

The prime minister has already faced protests over his corruption trial and a political crisis over the state budget in over the past several weeks.

Since 1973, the United States has maintained a policy of preserving Israel’s “qualitative military edge” in the region. Kushner said last month that the State Department and US military were “looking at” the possible sale now that the UAE recognized Israel.

Secretary of State Mike Pompeo sought to smooth over criticism of Netanyahu during the top diplomat’s visit to Israel last week. Pompeo did not plainly deny reports of the F-35 agreement, saying the administration would review its process of selling arms to the UAE to find way that would respect Israel’s military advantage.

UAE officials pulled out of a planned meeting with US and Israeli officials in Israel just days after the deal in protest of Netanyahu’s denials, Axios reported.

Meanwhile, Bahrain, Saudi Arabia and Sudan all appear to have declined the administration’s proposals toward normalizing ties with Israel over the past two weeks.

Whether the summit proposed by US and Israeli officials to be held in the UAE in mid-September will pan out remains to be seen.

Know more: Mazal Mualem shows how the UAE agreement may have reduced Netanyahu’s political headache for now, but Rina Bassist suggests the F-35 controversy is unlikely to dissipate anytime soon.