Israeli Defense Minister Benny Gantz met yesterday with US Secretary of Defense Mark Esper; the two ministers signed at the Pentagon a joint declaration over the United States maintaining Israel’s military advantage in the Middle East. 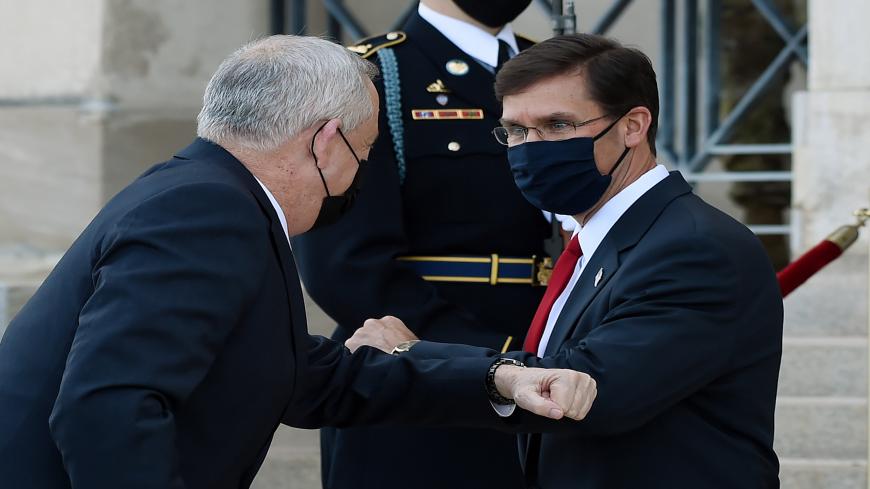 Israeli Defense Minister Benny Gantz and US Secretary of Defense Mark Esper signed Oct. 22 at the Pentagon a joint declaration, confirming Washington’s commitment to maintaining its ally’s qualitative military edge (QME) in the Middle East. It was Gantz's second visit to the Pentagon in just a month. His latest visit Sept. 22 focused on US snapback sanctions against Iran.

The Aug. 13 announcement by US President Donald Trump on Israel and the United Arab Emirates normalizing ties was followed by reports over American intentions to sell to the Emirates F-35 stealth jets. Consequently, Gantz and other seniors in the Israeli defense system expressed concerns over Israel losing its military superiority in the region. Yesterday’s declaration was apparently intended to quell these Israeli fears that it would no longer pose a regional military advantage.

"It was important for me once again to reaffirm the special relationship between our two countries, the commitment we made to Israel's security that is based on our shared values, our shared history and the commonalities between our two peoples. I want to thank you for your personal efforts in the past few weeks, and I want to state again how committed we are to Israel's qualitative military edge when it comes to defense sales, and our commitment to Israel's security, which has been long-standing and guaranteed and ironclad," said Esper at the signing ceremony.

Gantz thanked Esper for his commitment to Israel's security, stating, “Indeed over the last few weeks, you and I led, together with other people, very good and very important discussions that reassure the bipartisan commitment to Israel’s QME. I want to thank you and your people, and the American administration, for supporting it. Now that we are entering an era of positive normalization processes in the Middle East, which actually can face an aggressive Iran across the region, this ability of continued cooperation is so very important, and I am looking forward to hosting you in Israel. I want to thank you, the administration and everyone else who has helped in enabling this very important peace, making the future even brighter.''

Gantz reportedly went to Washington in order to advance Israel’s bid to purchase advanced US-made aircraft, such as F-15 and F-35 fighter jets, transport helicopters to replace the ones currently used by the Israel Defense Forces and probably also a V-22 multi-mission helicopter. The two countries have been discussing in recent weeks Israel’s procurement plan for the coming years. The security Cabinet is expected to convene on Sunday to approve part of the procurement, which is expected to be funded in part at least by US aid funds.

Reports in Israel claim the visit by Gantz was critical to Israel’s security. Not just because of the apparently imminent F-35 deal with the Emirates, but also as other arms sales could be expected following Israel’s peace agreements with Arab and Muslim countries.