The fault line between the “only Netanyahu” tribe against the “anyone but Netanyahu tribe” appears unprecedented, and the social chasms seem unbridgeable. 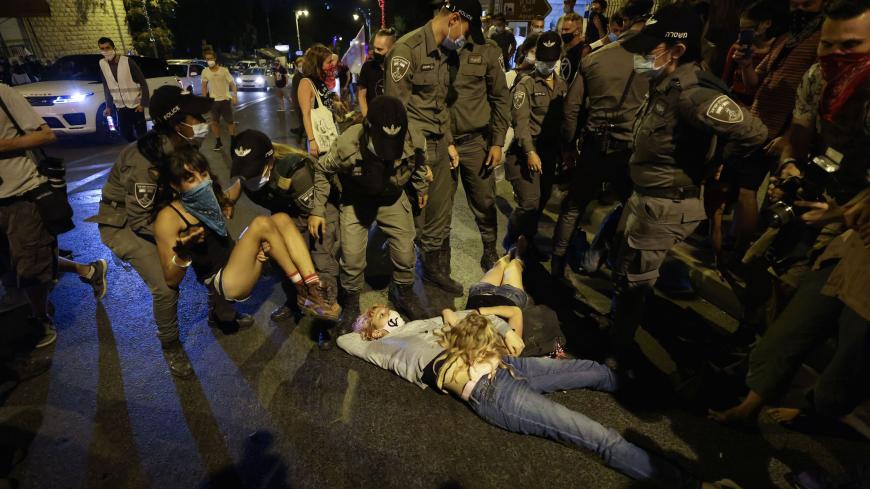 Police carry away a protester during an anti-government demonstration in front of the Prime Minister's residence in Jerusalem on Aug. 29, 2020.

President Reuven Rivlin could no longer contain himself. Rivlin, perhaps the last of a generation of dignified elder statesmen, took the podium on Oct. 12 to deliver the opening address of the Knesset’s winter session. The speech was meant to douse the flames licking at the edges of Israeli society. “It is unthinkable that every night, demonstrators are beating demonstrators. Police are beating demonstrators. Demonstrators are throwing stones at the police,” Rivlin thundered. “Israel’s tribalism is breaking out through the cracks, and accusatory fingers are pointed from one part of society to the other, one tribe to the other. Stop! Please stop! This is not the way. Pain must have its place. … It seems to me as if we have lost the moral compass that was with us from the state’s independence until today. The compass of fundamental principles and values that we are committed to uphold.”

The unprecedented speech, alternately warning and beseeching, did not resonate as expected. The public climate in Israel these days is the most explosive ever. Israel has experienced the assassination of a prime minister (Yitzhak Rabin in 1995), but it has never been this close to civil war.

This is not the president’s first reference to the tribal fault lines in Israeli society. In a defining 2015 address to the annual Herzliya Conference, Rivlin described the four tribes emerging from the country’s socio-economic shifts — secular, national/religious, ultra-orthodox and Arab — and warned of the lack of unity and cohesion among them. In the years since, the chasms among them have deepened. The police investigations of corruption by Prime Minister Benjamin Netanyahu and the subsequent decision by Attorney General Avichai Mandelblit to indict him on three criminal charges appeared to pour a huge barrel of fuel on the simmering tribal fires.

“The situation on the streets is highly flammable,” a senior police source told Al-Monitor on condition of anonymity. The official, who is involved in attempts to control the disruptions to public order resulting from a nationwide wave of protests against Netanyahu, added that he had not encountered such a situation throughout his career. “Such hatred of Israelis against each other, such alienation between the camps. Sometimes it really scares me,” he confessed.

Israel has known harsh political discord in its 72 years. The struggle between left and right was always heated and painful. Deep disagreements over peace agreements with Israel’s Arab neighbors and the future of the West Bank and the Jewish settlements there have divided Israeli society for decades. This is different. There are no peace agreements entailing concessions of homeland territories on the agenda. There are no disagreements over security issues. There are no particularly disruptive social-economic struggles. What we have here is a giant pool of bad blood and a bitter war between the two halves of Israeli society over one man, Benjamin Netanyahu — a war pitting the “only Netanyahu” tribe against the “anyone but Netanyahu tribe.”

These two camps have been facing off for months, teeth bared, vowing to fight to the bitter end — or victory. Those who believe that Netanyahu is the root of all evil, a clear and imminent danger to the well-being and security of the State of Israel, versus those who believe with all their hearts that Netanyahu is a modern-day Messiah, a world-class leader touched by the “hand of God.” Neither side intends to compromise, the fault line appears unprecedented and the chasms seem unbridgeable.

Given the dangerous abyss on which the Jewish State is verging, Netanyahu might have been expected to ease up, take time off to defend himself in court, and resign the way his predecessor Ehud Olmert did at the height of the police corruption inquiries against him (which ultimately sent him to jail). Netanyahu is not living up to these expectations. On the contrary, he is living up to the prophecy sounded by Rivlin several years ago when the police investigations began, to the effect that Netanyahu would never cave, and if he goes down, he would take everyone with him.

Netanyahu has had a number of opportunities to negotiate a dignified plea deal with the attorney general, which would have ended his trial even before it has properly begun and protected Israeli society from being torn apart during the court hearings scheduled to begin in January 2021. He has refused. Instead, on the first official day of the trial in May, Netanyahu arrived at Jerusalem District Court “armed” with a phalanx of Likud party lawmakers and ministers who provided a security cordon around him as he delivered a bitter diatribe against the country’s law enforcement authorities. In his efforts to avoid the arm of the law, Netanyahu has no qualms about crushing public trust in what remains of the police, state prosecution, attorney general’s office and the judiciary. He believes public support will help him overcome the system that has already sent a prime minister, president, finance minister and many other senior officials to jail over the past decade or more.

The coronavirus pandemic has exacerbated the latest developments to a crisis of biblical proportions. If Netanyahu could count on high and stable popularity in the past, he now finds himself on the defensive, perhaps in despair. From a rate of very low unemployment, the jobless rate has soared within months to double digits with some 1 million Israelis out of work. The public, by and large, blames Netanyahu’s failed management for the crisis. His Likud has plunged in the polls from a record of 41 Knesset seats a few months ago to 26 in the latest poll on Oct. 6. Netanyahu is losing his political-public immunity.

Pro-settler Yamina leader Naftali Bennett and his party colleague Matan Kahana voted with the rest of the opposition parties in favor of a no-confidence motion in Netanyahu’s government earlier this week. Netanyahu, who was for years the unchallenged leader of their right-wing camp, was quick to accuse Bennett of treason and switching to the political left.

The writing is already on the wall. Netanyahu’s government partner Blue and White leader Benny Gantz presented him with an ultimatum last week, warning that unless the prime minister approves the state budget by the end of the year, Israel would find itself facing elections. Netanyahu is being pushed backed inexorably toward a wall as he faces a deep abyss. Anyone who knows the man knows that he never gives up. Anyone familiar with current developments in Israeli society knows that this characteristic of Netanyahu’s could drag the country into a crisis rivaled only by the destruction of the two Jewish temples in Jerusalem in ancient times.