Is Israel heading toward civil war? 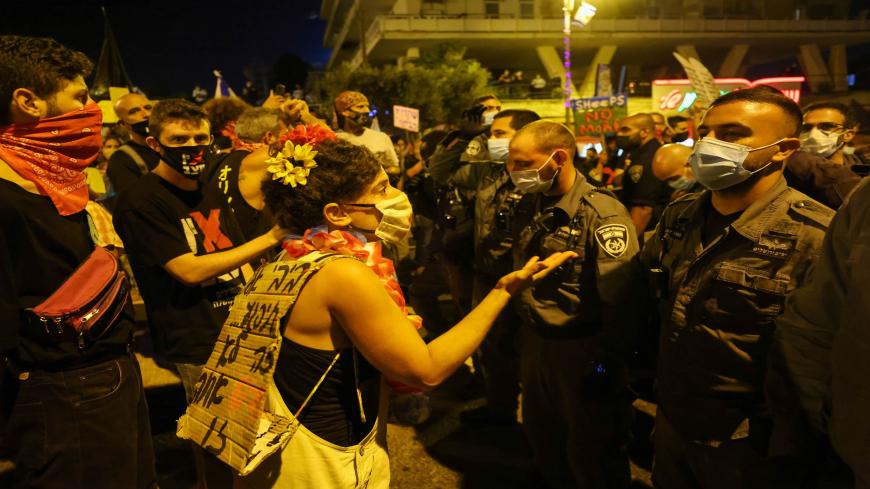 Israeli police are confronted by protesters during a demonstration amid a second lockdown in front of Prime Minister Benjamin Netanyahu's residence in Jerusalem, Sept. 26, 2020. - EMMANUEL DUNAND/AFP via Getty Images

The threat of civil war has overshadowed the history of Jews since biblical days and the history of Israelis. In fact, the Hebrew term for “civil war” is “brothers’ war,” likely dating back to the 12 tribes, if not Cain and Abel. Jewish lore attributes the destruction of the First Temple and the Second Temple in Jerusalem to “baseless hatred” and domestic clashes among Jews themselves.

Modern-day Israel has been wary of such a prospect, consciously adopting the opposite approach that glorifies unity, emphasizes a shared fate and upholds internal cohesion as one of its greatest assets in confronting adversity. Since its founding in 1948, the prevailing sense of “the world is against us” has been a source of pride and power even during times of internal disputes. That cohesion has been eroding in recent years, being replaced by a bloody internal chasm fueled by vicious hatred that appears veering out of control. Rarely has Israel been so close to a violent domestic clash, perhaps even to civil war.

Israel has faced two deeply scarring internal clashes in its short history. The first occurred in June 1948, weeks after the declaration of independence, when newly installed Prime Minister David Ben-Gurion ordered the sinking of the “Altalena,” a ship carrying weapons for the pre-state underground Etzel movement that was in the process of merging into the Israel Defense Forces. The second occurred four years later, when Menachem Begin, leader of the Herut party, the mother party of today’s Likud, led mass protests against Israel’s Holocaust reparations agreement with Germany. In both cases, the sides stopped on the verge of bloody clashes. The main credit in both cases goes to Begin, subsequently elected prime minister in 1977, who did all in his power to prevent civil war and took pride in this achievement until the day he died.

More than anything, Israel lacks a dignified model figure like Begin, who hit the brakes before it was too late and chose the welfare of the state over the personal or political interests of his movement.

Prime Minister and Likud party Chair Benjamin Netanyahu, does not intend to follow Begin’s example. On the contrary, he is engaged daily in intensifying incitement against state institutions and his perceived and real political enemies. Facing him are hundreds of thousands of dissenters who are also unwilling to step down. The silent majority of Israelis is torn between these two bellicose camps. The police is having a hard time getting a handle on the protests, trust in the institutions of state is at a record low and hatred is coloring the public arena as never before.

The dispute is no longer over competing left- and right-wing ideologies, nor over agreements and concessions to enemy states and issues of war and peace. The conflict between the two halves of the Israeli populace is purely personal. It pits supporters and opponents of Netanyahu against each other. On the one side is a large segment of the public that swears by Netanyahu and views him as the messiah standing between Israel and extinction. On the other side is a segment of the population, just as zealous, that views Netanyahu as a clear and present danger to the future of the state. Combined with the raging coronavirus pandemic, its economic fallout, the ultra-Orthodox Jews ignoring lockdown restrictions and the persistent protests turning increasingly violent, the internecine tensions are confronting Israel with the most slippery slope it has known since its founding.

The continued onslaught by Netanyahu and his emissaries on the rule of law, on law enforcement authorities, the courts and all other state symbols makes the current tensions particularly explosive. The campaign has yielded considerable success. Many in Israel no longer trust any state institution, and many believe the police have framed Netanyahu, the state prosecution and the attorney general have plotted to bring him down with an unfounded corruption indictment and the demonic left, albeit its almost extinct status, is conspiring to restore its glory days by a forceful takeover of the government.

Netanyahu’s opponents share with his followers the same sense that the institutions of the state are bankrupt. The anti-Netanyahu protest began some three years ago, but did not take off. It was limited to several small groups that mainly focused on the prime minister’s alleged corruption, but failed to attract broad support. The coronavirus outbreak and its economic destruction broke the dams, catapulting tens of thousands of young Israelis into the streets and turning what was largely a niche protest into a growing threat to Netanyahu’s hold on power. The regular demonstrations outside Netanyahu’s official Jerusalem residence quickly expanded and intensified, prompting smaller, spin-off protests across the country as tens of thousands took up positions at hundreds of intersections and bridges waving the blue-and-white state flag as well as black flags and calling for Netanyahu’s resignation. Thousands have appended the word “go” to their Facebook profile photos in recent days — as in, "Netanyahu, go away."

Netanyahu is doing all he can to block the protests, mobilizing the spread of coronavirus infections to serve his ends. Sources within the ministerial coronavirus crisis cabinet have reported repeatedly that the ban on protests that he managed to push through is of far more interest to Netanyahu than the fight against the pandemic.

The last time Netanyahu faced such popular protest was in 2011, when hundreds of thousands of Israelis flooded the streets and town squares to demand “social justice.” Netanyahu quelled that protest with relative ease by promising a few economic crumbs and negotiating the release of Gilad Shalit, a soldier held captive by Hamas in return for the release of hundreds of jailed terrorists. Nine years on, this is no longer an option. Israel is breaking COVID-19 morbidity records, some 1 million Israelis have lost their jobs and tens of thousands their places of business, the budget deficit is soaring and the government appears to lack resolve or solutions. Israelis need not fear good news anytime soon.

The despair on the warring sides is growing. The police is employing increasingly violent tactics to control the protests. It will only take one spark to set off the barrel of dynamite threatening the streets. Calls by conservative journalists and pundits to offer Netanyahu a pardon and bury his indictment in return for his resignation have not helped restore calm.

Netanyahu does not seem to be planning a retreat, nor do his opponents. The evidence phase of his trial is due to start in January, his rival/partner Blue and White party is being held hostage in the largely crippled “unity” government formed in May and no logical solution appears in the offing. President Reuven Rivlin’s prophecy of several years ago that Netanyahu would take the state with him if he goes down, is coming true in front of our very eyes. Israel is still far from a real civil war, but the distance is growing shorter with every passing day.