Israel and Lebanon sent technical delegations for the talks today on establishing their maritime border. 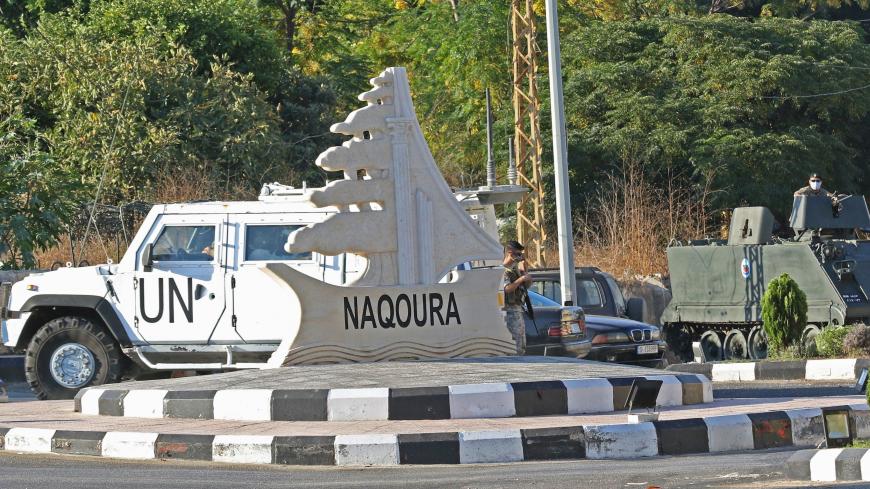 UNIFIL and Lebanese military vehicles guarding the area near the UNIFIL base where Israeli and Lebanese delegations held their first round of talks on the demarcation of the maritime frontier between the two countries, which are technically in a state of war, in the southern Lebanese border town of Naqoura on Oct. 14, 2020. - MAHMOUD ZAYYAT/AFP via Getty Images

Israel and Lebanon kept a low profile today while launching talks on demarking the bilateral maritime border. The talks' sponsors the United States and United Nations said in a joined statement on this morning's meeting, “During this initial meeting, the representatives held productive talks and reaffirmed their commitment to continue negotiations later this month.” A second meeting is scheduled for Oct. 28.

The meeting took place in a tent at the headquarters of the United Nations Interim Force in Lebanon in the southern Lebanon town of Naqoura, near the border with Israel. The two countries are technically at a state of war. Still, Israeli officials downplayed the importance of these rare negotiations this week, stressing they should by no means be taken as the beginning of a normalization process similar to that which took place with the United Arab Emirates or Bahrain.

A senior Israeli Energy Ministry source was quoted as saying, “We have a pragmatic, realistic attitude. We have a defined goal to solve the disagreement and set a border for our economic waters. … The goal is very limited and clear.” Energy Minister Yuval Steinitz, who has been involved in the talks, said earlier this week, "We must have realistic expectations about negotiations with Lebanon. It’s not talks for peace and normalization. Rather, it’s an attempt to solve a technical-economic dispute that for 10 years has delayed the development of natural resources in the sea for the benefit of the nations of the region.”

The Lebanese groups Hezbollah and Amal pushed President Michel Aoun to exclude representatives of the Lebanese Foreign Ministry from the delegation. The Lebanese team was led by Brig. Gen. Bassam Yassin and included Col. Mazen Basbous, Lebanese oil official Wissam Chbat and border control expert Najib Massihi. Both delegations were reportedly present, though the talks themselves were conducted indirectly through American mediation.

The talks focus on a disputed maritime area of 860 square kilometers (330 square miles). Both countries are hoping to explore and develop new gas fields in the Mediterranean Sea. Indirect contacts on the issue have been ongoing for years, mostly through American shuttle diplomacy. Assistant Secretary of State for Near East Affairs David Schenker had been involved in contacts between Jerusalem and Beirut and visited both countries on several occasions in the past few months. The normalization agreement between Israel and the UAE apparently offered the push needed for Lebanon to agree to negotiate. The Americans announced on Oct. 1 that talks would take place in mid-October and the news was confirmed by both sides.

Israel and Lebanon also disagree on the demarcation of their land border, particularly in the Mount Dov area. American and Lebanese officials have said that the land disputes between Israel and Lebanon will be handled via a separate channel. Israeli sources said that no framework has been set up yet for such talks.