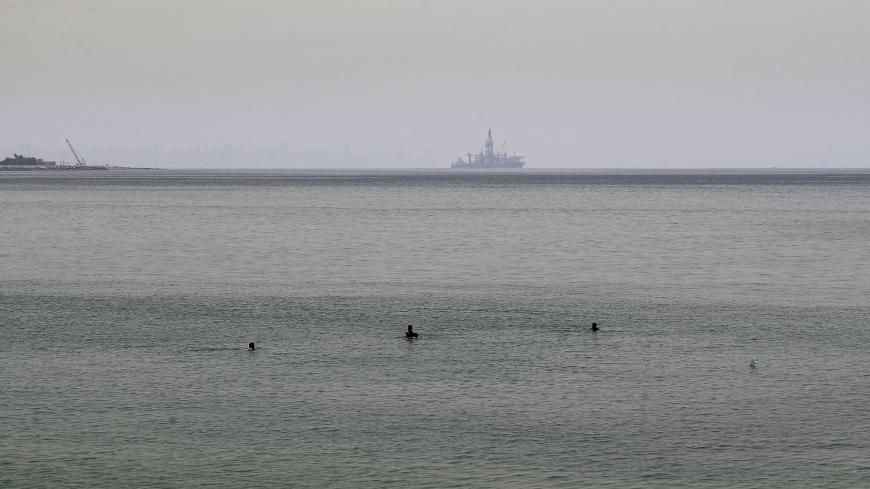 The Tungsten Explorer, an off-shore oil and gas exploration drillship, is seen in the background as people bathe in the Mediterranean water off the coast of Jounieh Bay, north of Lebanon's capital Beirut, on May 19, 2020. - JOSEPH EID/AFP via Getty Images

Israel’s Foreign Minister Gabi Ashkenazi confirmed Oct. 1 that Israel and Lebanon will soon discuss demarking their maritime border. Talks are expected to be launched after Israel's Sukkoth holiday in mid-October and will be conducted under the auspices of the United States. Lebanon's parliament speaker Nabih Berri has also confirmed the news.

"I would like to thank US Secretary of State Mike Pompeo and his staff for their dedicated efforts that have led to the beginning of direct talks between Israel and Lebanon on the demarcation of the maritime boundary. This is an important step that has come after three years of diplomatic contacts and would not have been possible without US mediation. I believe that success in the talks will significantly contribute to the stability of the region and promote prosperity for the citizens of both Israel and Lebanon. I thank Energy Minister Yuval Steinitz for the successful cooperation between our two ministries on advancing this issue," tweeted Ashkenazi.

Steinitz also made a statement, saying, "We look forward to the opening of direct negotiations in the near future. Our objective is to end the dispute over the economic maritime demarcation of the water between Israel and Lebanon in order to help develop natural resources for the benefit of all peoples in the region.”

The Israel-Lebanon talks are expected to take place in the southern Lebanon border town Naqoura, at the headquarters of the UN Interim Force in Lebanon (UNIFIL). As Israel objected to the United Nations mediating the talks, the body will instead host the talks with a UN observer present, but an American team will facilitate them. UNIFIL said in a statement today that it "welcomes today's announcement of a framework agreement to launch negotiations between Lebanon and Israel on maritime border demarcation between the two countries. UNIFIL stands ready to extend to the parties all the support at its disposal and facilitate efforts towards a resolution of this issue."

The US mediation team will apparently be headed by Assistant Secretary of State for Near East Affairs David Schenker, who had been involved in earlier contacts between Jerusalem and Beirut and visited both countries on several occasions in the past few months. On Sept. 8, Schenker said he hoped to sign a framework agreement on starting discussions "in the coming weeks."

Steinitz had been working recently with Foreign Minister Gabi Ashkenazi and other officials in the Foreign Ministry to reach this agreement with Lebanon. The two countries have been at odds over an 860-square-kilometer (534-square-mile) maritime territory for over a decade, since the discovery of possible marine gas fields off the coast. Israeli diplomats noted to Al-Monitor that the two countries had not held direct talks in many years and called the agreement a historic breakthrough.