Reports say that following US mediation, Israel and Lebanon are now ready to discuss the marking of their maritime borderline. 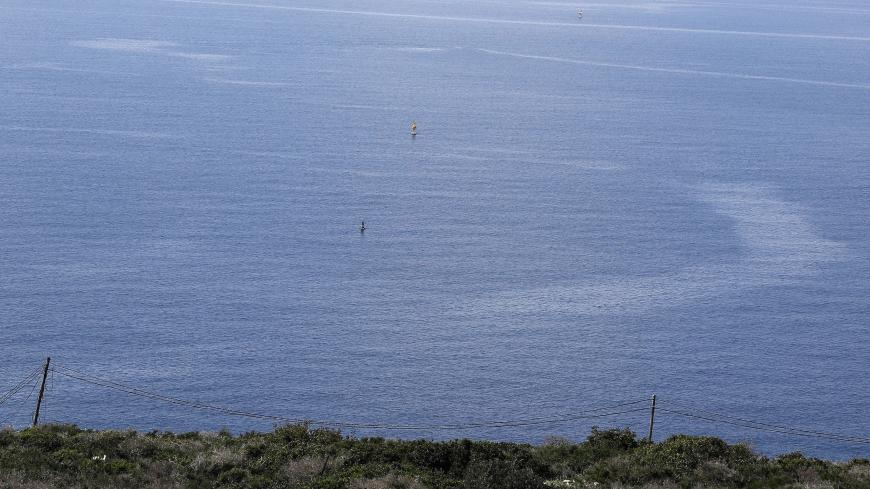 A picture taken on Feb. 24, 2018, from Lebanon's southern border town of Naqura on the border with Israel, south of Beirut, shows the maritime boundaries between Lebanon and Israel.

A spokesperson from the Ministry of Energy told Al-Monitor that Israel "is aware" of publications about the country resuming negotiations with Lebanon over their maritime border. The spokesperson did not confirm the details published recently in the Israeli press on bilateral talks set to begin after the Jewish High Holidays season in mid-October. Still, the spokesperson confirmed that Energy Minister Yuval Steinitz was the one leading the contacts from the Israeli side.

This affirmation came in reaction to reports last week by journalist Ehud Yaari. On Sept. 25, Yaari revealed that after many years of preliminary negotiations, Israel and Lebanon had reached an agreement to hold concrete talks about marking their maritime border. Apparently, these talks will be conducted in the southern Lebanon town of Naqura, where UNIFIL (the UN Interim Force in Lebanon) headquarters are located. The talks will be held under the auspice of a senior American official and with the presence of a UN rapporteur.

Other reports indicated that the senior American representative would likely be Assistant Secretary of State for Near East Affairs David Schenker, who had been involved in these recent negotiations. Schenker had visited Israel last week, updating Steinitz and seniors in Israel’s Foreign Ministry on advancement in his contacts earlier this month with Lebanese authorities, especially with parliament speaker Nabih Berri and officials in President Michel Aoun’s office. According to these reports, the formula that was finally accepted was for the Americans to lead the talks with the UN merely observing instead of the United States and the UN co-mediating talks, as Beirut had originally sought. Jerusalem had opposed talks under UN auspice. Thus, the notes of the UN rapporteur will not be officially filed at the UN.

The dispute between Israel and Lebanon over their maritime border has lasted for about a decade, ever since the discovery of possible marine gas fields off the Israel-Lebanon coast. The two countries disagree over certain future drilling areas — some 860 square kilometers of contested maritime territory. On June 23, Israeli authorities decided to greenlight exploration drilling in the disputed Block 72 area. The Israeli June decision on opening an international drilling tender generated a harsh Lebanese reaction, with President Aoun warning that the decision was "extremely dangerous." Now it seems that despite this decision, Beirut and Jerusalem are ready to negotiate the maritime borderline.

None of the parties involved has openly disclosed so far if Israel intends to go through with the exploration drilling. Nevertheless, publications indicate that Israel had expressed its willingness to split the contested maritime territory in a 58:42 ratio in Beirut’s favor. Such a decision would enable Lebanon and the French company Total to start drilling in Block 9 adjacent to the contested area, and for Israel to advance with its drilling tender.

The dispute over the drilling areas explains the involvement of Minister Steinitz in the talks over marking the maritime borderline. Still, Israel’s Foreign Ministry is also an important actor in these talks and will take part in the negotiations that are expected to start in the coming weeks. A senior Israeli diplomat told Al-Monitor that the ministry has been deeply involved in mediated talks with Lebanon over the years, though the composition of the Israeli delegation — if talks will indeed be relaunched — has not been decided yet.