Second round of maritime-border talks between Israel, Lebanon

Israel and Lebanon conducted a second round of mediated talks with the goal demarcating the maritime border between the two countries. 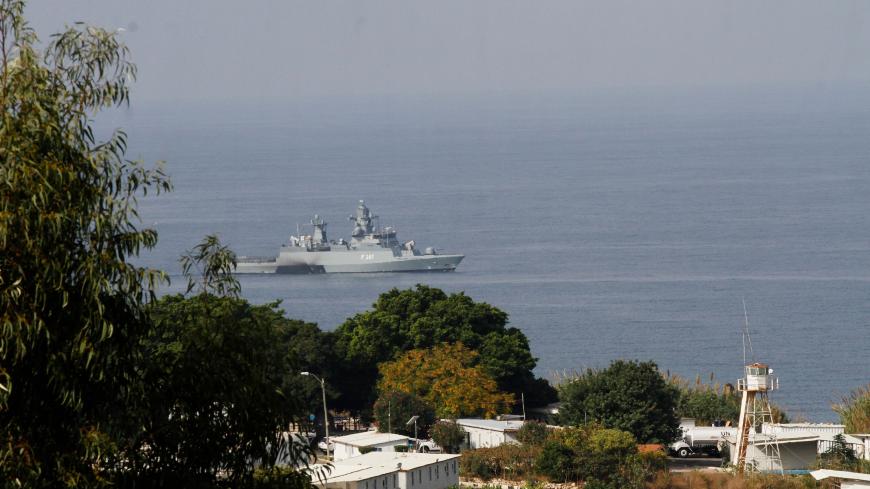 An Israeli navy corvette is pictured from the southern Lebanese border town of Naqoura as it patrols the waters on Oct. 28, 2020, during talks between Lebanese and Israeli delegations on the demarcation of the maritime frontier between the two countries.

Israel and Lebanon began Oct. 28 a second round of talks for demarcating their maritime border. The negotiations are being mediated by the US ambassador to Algeria, John Desrocher, under the auspices of the United Nations.

Much like the first round of talks Oct. 14, the parties convened at the UN Interim Force in Lebanon headquarters in the town of Naqoura in southern Lebanon. The talks are expected to continue Oct. 29. After the Oct. 28 talks concluded, the Israeli delegation updated Energy Minister Yuval Steinitz on what was discussed and he gave the go-ahead for the talks to continue. The ministry gave no other details about the talks.

The maritime border dispute is several years old, revolving around Israeli and Lebanese plans to exploit natural gas underwater reserves off their shores. Steinitz said Oct. 27, “The purpose of the delegation in the meetings is to examine the possibility of reaching an agreement on the determination of the maritime border between the countries in a way that will enable the development of natural resources in the region.’’

One Lebanese condition for the talks was for both delegations to be composed of senior officials and not political figures. Thus, Beirut is able to present these mediated contacts with Israel as merely technical. The director-general of the Israeli Energy Ministry, Udi Adiri, the Israeli Foreign Ministry's deputy director-general for the UN and international organizations, Alon Bar, and other officials from the two ministries and from the office of the prime minister represented Israel in both rounds. Haim Srebro, an expert on international boundaries, was also asked to join the Israeli delegation for the Oct. 28 talks.

After the Oct. 14 talks, Israeli Prime Minister Benjamin Netanyahu expressed hope that the negotiations would lead to some sort of a dialogue on a political level and subsequently also to peace. Addressing the Knesset on the occasion of the Israeli parliament's approval of normalization with the United Arab Emirates, Netanyahu called on the Lebanese government "to continue these talks and maybe this will mark the first step toward the achievement of peace.’’

Israel and Lebanon are still technically in a state of war and do not have diplomatic relations.

On Oct. 27, Israeli Defense Minister Benny Gantz said he was “hearing positive voices coming out of Lebanon, who are even talking about peace with Israel,’’ adding that these positive voices ‘’are welcome words.”

Gantz spoke in a general manner, without mentioning names, but analysts think he was referring not only to the talks in Naqoura, but also to an interview given Oct. 26 by Claudine Aoun, daughter of Lebanese President Michel Aoun.

Speaking on the Al Jadeed TV channel, Claudine Aoun said peace with Israel would be conceivable if outstanding issues were resolved. “We have the maritime border dispute, the issue of Palestinian refugees and another topic that is more important, the issue of natural resources: water, oil and natural gas, which Lebanon is depending on to advance its economy. … After these problems are solved, I would not mind if the Lebanese state makes peace with Israel, after the demarcation and the guarantee of resources,” she said. Asked if she would object to peace with Israel, she responded, “Why would I object? Are we supposed to stay in a state of war? ... I don’t have doctrinal differences with anyone. … I have political differences.”