Israel willing to give maritime talks with Lebanon another try

Energy Minister Karin Elharar says that while Israel welcomes the new American mediator, 'we will not give up on Israel’s security nor on any of Israel’s territory.' 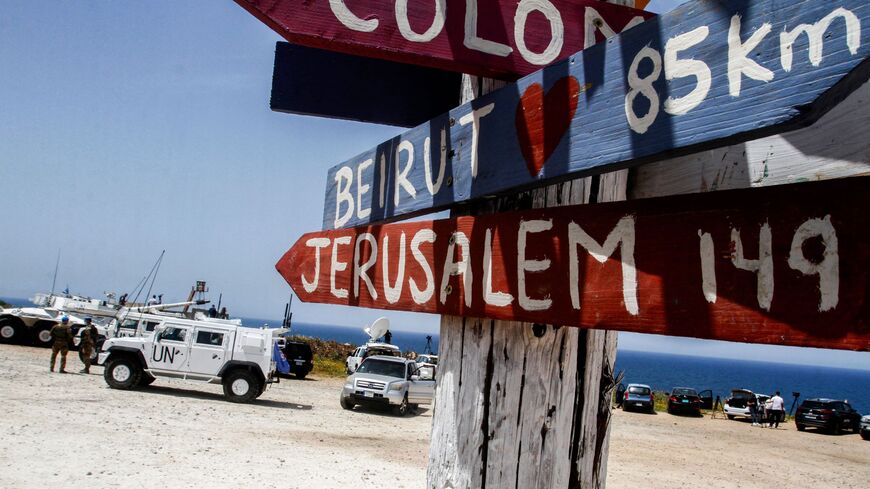 United Nations peacekeeping vehicles are stationed along the main road near Lebanon's southern town of Naqoura, close to the border with Israel, on May 4, 2021, protesting against resumption of indirect talks on the two nations' maritime border. - MAHMOUD ZAYYAT/AFP via Getty Images

Israel welcomes the new mediator to the US-sponsored talks with Lebanon over their mutual maritime border in the Mediterranean Sea.

Energy Minister Karine Elharar spoke to Al-Monitor today about the recent nomination of State Department energy envoy Amos Hochstein to this position, replacing Ambassador John Desrocher, who was nominated by the Trump administration. Hochstein, who was born and raised in Israel to American parents, is well familiar with the issue at hand. He has already served in this capacity under the Obama administration.

The US-mediated talks had taken place in the headquarters of the United Nations Interim Force in the southern Lebanon town of Naqoura, near the border with Israel. Both countries consider a maritime area of some 860 square kilometers as part of their own exclusive economic zone. Teams from both countries have met several times, in an effort to reach a compromise, but talks were stalled last May after each side presented its own (contrasting) map outlining proposed borders for the disputed area. Israel is already drilling for natural gas in several spots at the vicinity, which is considered a high-potential area. Lebanon started drilling offshore only a few months ago. It had delineated ten water blocs for drilling, with three in the disputed area.

Desrocher "did not reach a very good result," Elharar said today, "True, the Lebanese did come for the talks in Naqoura with our team headed by Energy Minister Director General Udi Adiri. That was certainly positive. But it is important to note that Israel came to Naqoura to negotiate. We did not come to have Beirut dictating the terms of the negotiation or their results. They cannot go to the UN security Council, present them with an outline map [for the maritime border] and expect that Israel will simply adopt that. … We will not give up on Israel’s security nor on any of Israel’s territory. This must be clear to all participating parties.’’

Still, Elharar clarified that Israel is willing to give talks another try. She is set to meet Hochstein in the coming days to explore ways of reviving the negotiations. Apparently, Hochstein is expected to visit both Israel and Lebanon later this month.