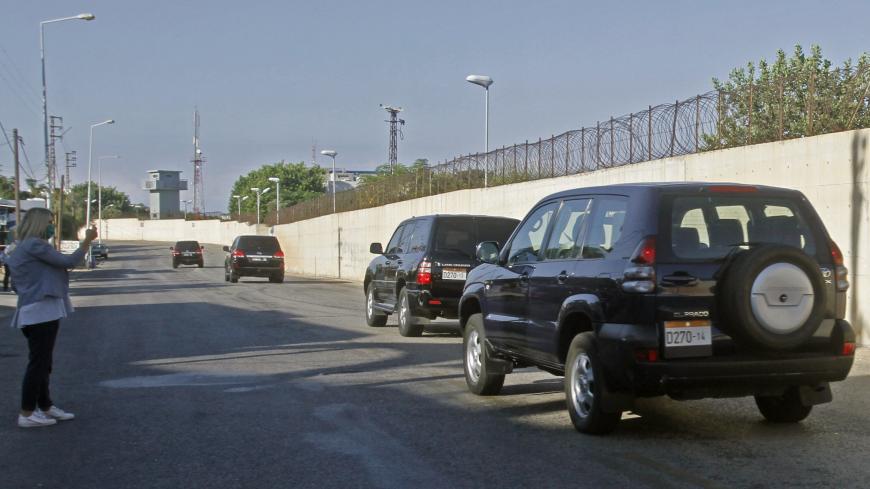 A diplomatic convoy carries UN officials to attend the first round of talks between Lebanese and Israeli delegations on the demarcation of the maritime frontier between the two countries, which are still in a state of war, in the southern Lebanese border town of Naqoura on Oct. 14, 2020. - MAHMOUD ZAYYAT/AFP via Getty Images

Hezbollah today took issue with the Lebanese delegation chosen to participate in unprecedented talks with Israel over contested borders in the Mediterranean Sea.

Representatives from Israel and Lebanon gathered for talks facilitated by the United States aimed at resolving a dispute over access to 330 square miles in the oil-rich waters. Both Middle Eastern countries are hoping to develop new gas fields in the Mediterranean.

In a joint statement released hours before the talks were due to start today, Hezbollah and Amal, the country’s other main Shiite party, called for the negotiating team to be revised to include only members of the military.

“The two demand immediately rowing back from this decision and re-forming the delegation in line with the framework agreement,” the statement said. “Amal and Hezbollah announce their explicit rejection of what happened.”

The talks were held at the headquarters of the UN peacekeeping mission in Lebanon in the Lebanese border town of Naqoura. A statement from the State Department described the meeting as “productive” and said both sides reaffirmed their commitment to reconvene later this month.

Lebanon and Israel are still technically at war and maintain no diplomatic relations. Earlier in the week, the pro-Hezbollah Al-Akhbar newspaper called the talks with Israel “a moment of unprecedented political weakness for Lebanon.”

The maritime border talks come on the heels of another diplomatic breakthrough brokered by the Donald Trump administration. Last month, the United Arab Emirates and Bahrain established normal relations with Israel, becoming the first Arab states to do so since Egypt in 1979 and Jordan in 1994.

Also today, President Michel Aoun announced he was postponing consultations with parliament aimed at naming a new prime minister. Lebanon has struggled to form a new government since former Prime Minister Hassan Diab and his Cabinet resigned days after the deadly Beirut blast in August.