Prime Minister Benjamin Netanyahu is now discovering that with the raging pandemic and economic crisis, security is the last thing on Israelis’ minds. 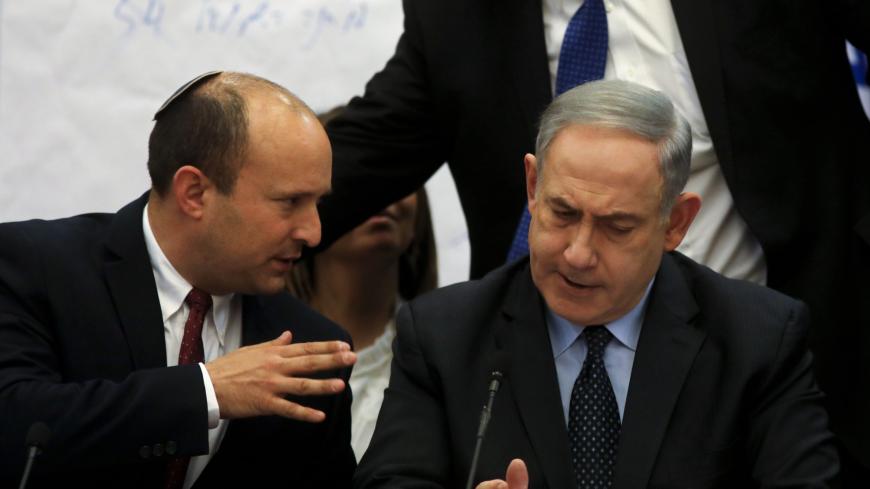 Naftali Bennett (L) speaks to Prime Minister Benjamin Netanyahu (R) at the Knesset in Jerusalem, on March 4, 2020. Bennett has stolen Netanyahu's thunder on the coronavirus. - MENAHEM KAHANA/AFP via Getty Images

Shortly before the April 2019 Knesset election, the Israel Democracy Institute published the results of an extensive poll that asked what issue was most important to Israelis as they headed out to vote. Based on its findings, most Israelis were focused on social or economic matters. Some 45% of respondents responded that these were the most important issues for them, ranking significantly higher than foreign affairs and security (28%), religion and state (11%) or bolstering and defending democracy (9%).

The actual election showed a different result. People may have been thinking about the economy or democracy, but their votes still focused on security affairs. Most Israelis cast their ballots for the Likud headed by Prime Minister Benjamin Netanyahu, who prides himself on his brand as “Mr. Security,” or for the former Israel Defense Forces (IDF) chief of staff Benny Gantz of the Blue and White party. In fact, three out of the four men at the top of the Blue and White list were former chiefs of staff: Gantz, Gabi Ashkenazi and Moshe Ya’alon.

There was nothing unusual about this vote either. Most Israelis identify their existential dread with security threats. It is a paradigm that is hard to break, which is why it has been the top consideration in just about every election until now. Certainly, there were years in which complaints about government corruption gained momentum. That is what happened in 1992, when the Likud was considered to be a corrupt party. Even then, however, it was not the sole factor in determining the outcome of the vote. The winner of that election was Yitzhak Rabin, who was also a former chief of staff. Israelis believed that he would be able to rein in terrorism within Israel.

Netanyahu has benefited from this voting pattern. He spent much of his time as prime minister benefiting from the “Mr. Security” label. Even when he ran against three former chiefs of staff in three successive election campaigns, he came out on top. The results prove themselves. He is still prime minister.

But then the coronavirus came and reshuffled the deck. The results for Netanyahu were nothing short of tragic. The pandemic began to spread in what was otherwise a good year for Netanyahu, in terms of both civil and security affairs. There was quiet along most of the country’s borders, and people enjoyed a high level of personal security (figures provided by the Defense Ministry for the last 56 years show that not a single Israeli was killed as a result of terrorism from August 2019 to August this year). There were also important achievements in the campaigns against Iran and Hezbollah over the last decade, and Israeli maintained its status as a regional military superpower. In addition to all of this, Netanyahu surprised everyone by signing peace agreements with two important Arab states, the United Arab Emirates and Bahrain, which further strengthened Israel’s standing in the region. And there were other achievements, too, resulting from Netanyahu’s excellent relations with US President Donald Trump. The United States recognized Israeli sovereignty over the Golan Heights and relocated its embassy to Jerusalem. Both of these fulfilled the aspirations of Israelis, regardless of political affiliation.

And yet, while this may have been one of Israel’s most successful years in terms diplomacy and security affairs, people are still deeply worried about the economy and their health. The headlines in all media describe a health system that is starved for funds, hundreds of thousands of unemployed Israelis and businesses going under. Then there are the mass demonstrations against Netanyahu, who is accused of corruption and of dismantling Israeli democracy. Social media is flooded with images of business owners destroying their wares in protest, stories of people who died of the coronavirus, and accounts of young people in despair who are becoming a lost generation.

The most recent research and polls all indicate that this serves as fertile ground for the rise of someone such as Yamina leader Naftali Bennett. It explains why he is now the only candidate who really challenges Netanyahu’s rule. Ever since the start of the COVID-19 crisis, Bennett has focused exclusively on social and economic issues. He went out to the people, visiting hospitals and meeting with business owners. “If it’s not the economy, then I’m not interested,” became his coronavirus campaign slogan. He published a book, “How to beat COVID-19,” and accused Netanyahu of leading the country to the brink of disaster. It all worked to Bennett's advantage.

Another factor that helps Bennett, but which has received less attention from the media, is the stable security situation and diplomatic developments that have benefited Israelis over the last few years. Netanyahu has many critics. Some of these are former security chiefs, who claim that he is all bluff, and that he actually poses a real threat to national security. Nevertheless, even they cannot deny these facts. It turns out that the sense of security that Israelis feel and the state of calm along the borders actually act against Netanyahu’s interests, because they give people time to focus on social and economic issues. These are people who have been taught to close ranks during security crises. They put their political differences aside and stood together during the many wars that Israel has fought against external enemies. The situation now is different. This is the first time in the country’s history that the existential threat facing Israel is internal. There is no way to blame what is happening on Hamas, Hezbollah or Iran. Netanyahu is an expert at fearmongering campaigns, particularly when it comes to Iran. Now he is discovering that security is the last thing on Israelis’ minds.

On Oct. 19, it was revealed that the IDF found an assault tunnel, which began in Gaza and aimed at penetrating Israeli territory. As it turns out, the early discovery of this tunnel was made possible because of the underground barrier under the border fence between Israel and the Strip; this barrier started being built after Operation Protective Edge in 2014. This anti-tunnel barrier includes very advanced technologies, placed dozens of meters underground. In this particular case, it revealed a tunnel that was being excavated very deep in the ground, but which was not intended for use at present. Rather, it was being dug for strategic reasons, with plans to use it in the event of war.

Military commentators reported that the IDF originally opposed the underground barrier because of its cost, but that Netanyahu applied pressure to get them to reverse their decision. He even gave the IDF an blank check for up to 1 billion shekels (nearly $300 million). Then he went down to the Gaza border and ordered the construction of an underground barrier stretching for 65 kilometers (40 miles), so as to eliminate any strategic capacities Hamas might have in the next war. The barrier is scheduled to be completed this year.

A high-ranking delegation of economic and finance ministers from the UAE arrived in Israel the very next day on a direct flight from Dubai. These are two dramatic events, but they both got swallowed up by the harsh news about the economy and the pandemic.

Netanyahu tweeted, “We continue to work doggedly on all fronts to ensure Israel’s security, and to prevent any efforts to inflict harm on our sovereignty or citizens.” There may be dramatic photos from the border with Gaza or the arrival of the delegation from the Gulf, but Israelis are still going about their day-to-day lives. As long as the border remains quiet, the only threats they really face affect their wallets and their health, and most people think that Netanyahu failed on both fronts.

The real question is whether Netanyahu can still recover politically. He knows where public sentiments lie, so he spent the last two weeks dealing exclusively with the coronavirus crisis. He has adopted a more official attitude, and has even reduced his attacks on his political rivals. The irony is that if there was a real security crisis, it would actually help him in an election.