The constant stalling and refusal of Prime Minister Benjamin Netanyahu to conclude a national unity agreement start irritating even his closest allies within the right-wing camp. 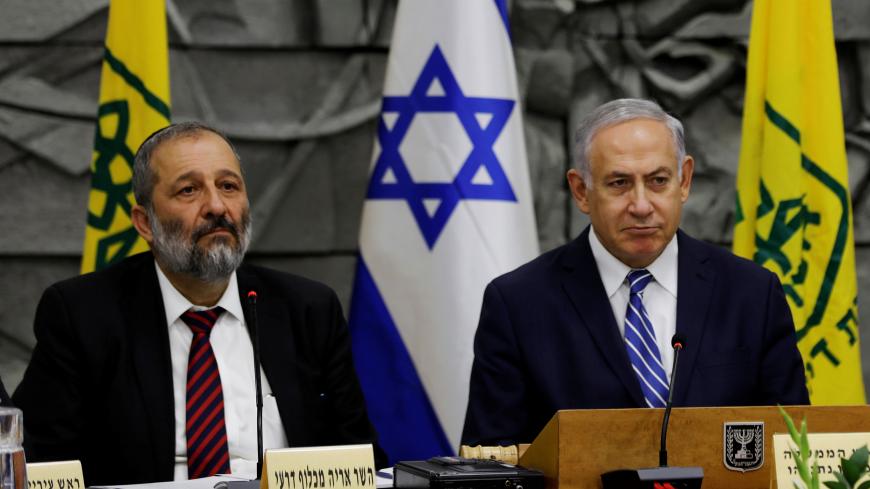 “I don’t know where you are taking us,” hissed Shas Chairman and Interior Minister Aryeh Deri to Prime Minister Benjamin Netanyahu in a harsh conversation they recently conducted. Al-Monitor received this information, on condition of anonymity, from a high-placed Likud minister in whom Deri confided.

Deri, the key mediator between Netanyahu and Blue and White Chairman Benny Gantz, encouraged the sides to form a ‘"unity coronavirus government" as soon as possible. The second go-between was No. 2 in Blue and White, former Chief of Staff Gabi Ashkenazi, who in fact conducted the initial contacts with Deri. Ashkenazi was in favor of a unity government, even at the cost of dismantling Blue and White. He invested much effort and put out innumerable feelers to lower the levels of suspicion and anger that Gantz had accumulated toward Netanyahu in the wild, unruly March election campaign.

In Ashkenazi’s talks with Deri, the Shas chairman promised Ashkenazi that he be personally and directly responsible for ensuring that Netanyahu would carry out his campaign promises. Deri mollified Ashkenazi and told him that he believed Netanyahu was serious this time, and wanted to avert a fourth election campaign.

As we recall, the beginning was promising. When Blue and White fell apart on March 26, Gantz was free to open a coalition negotiations process with Netanyahu. In these personal talks, Netanyahu exhibited willingness to compromise and turned on his personal charm. But as time went on, it emerged that every time it seemed that the negotiations were about to end with a signature on the dotted coalition agreement, Netanyahu would come up with yet another sticking point. Gantz’ negotiations staff, who spent long hours in the official Balfour residence and had direct access to Netanyahu and his staff, were exhausted and depleted. Netanyahu demanded guarantees so that the High Court would not disqualify him from serving as prime minister or later as deputy prime minister in a rotation agreement. Blue and White’s people proposed more and more creative judicial solutions that they placed on Netanyahu’s desk, out of their desire to arm him with the legal security net he requested. However, Gantz repeatedly saw how the prime minister could not be placated.

Ashkenazi, the one who had used all his strength to prod Gantz into a unity deal, asked Deri to intervene and present Netanyahu with a red line. To stop this endless cycle of requests. Deri is perhaps Netanyahu’s most important ally in forming the right-wing bloc; this platform had fiercely protected Netanyahu in the course of the elections and after them. But this time, to his surprise, Deri found Netanyahu insisting over and over about tightening the coalition agreement even more — adding more and more conditions — so that the High Court would be unable to disqualify him from serving as deputy prime minister (in the second period, when Gantz should serve as premier). Even Deri learned that despite his personal closeness to the prime minister, he was unable to bring down Netanyahu’s walls of paranoia.

This development is a bad sign for the unity of the right-wing bloc. Should a fourth election be held in the summer, on Aug. 4, Netanyahu may find himself open to new alliances against him. True, Deri will continue to support Netanyahu until the elections and during them because the ultra-Orthodox electorate wants him as prime minister. But afterward, Deri will feel far less committed to his alliance with him. He might even be open to a new alliance with Blue and White — now that its anti-clerical component, Yair Lapid, quit the party and went his own way.

But Netanyahu’s problems in the right-wing bloc are not limited to Deri alone. The heads of the pro-settler Yamina party are speaking against him and argue that the prime minister had given in to Gantz and was too ready to give up his grip on the Justice Ministry, for the sake of the unity government under formation. In actual fact, they revealed that they are still the prime minister’s spare tire, with regard to receiving positions of influence. Like Deri, they also will continue to support Netanyahu, but once the fourth elections will be behind them (if needed), the Yamina people will feel much less committed to the prime minister. In fact, they might even want to take revenge.

For Yamina, like Shas and the other ultra-Orthodox party, Gantz without certain left-wing elements might become a more convenient partner than before. Both Gantz and Ashkenazi are accepted figures among the right wing and the ultra-Orthodox.

“Even [Finance Minister Moshe] Kahlon is fed up with Netanyahu,” a source close to the finance minister told Al-Monitor on condition of anonymity. According to the source, Kahlon sent a clear message to the prime minister: If a unity government is not founded, he intends to resign immediately within the three weeks that the law allots to establishing a government. He will not wait any longer for his replacement.

True, Kahlon is already on his way out and has announced his exit from political life, but he intended to do so only after a new government would be founded. Kahlon also believed that Netanyahu was serious this time, since he has no other options. Thus, Kahlon now feels both exhausted and revolted.

When we examine Netanyahu’s prestige among the opinion leaders of the right-wing public (mainly in social networks), we also find cracks forming and criticism of the prime minister’s treatment of Gantz. Even prestigious journalists who are fans of Netanyahu call on him to carry out the commitment he gave to the Blue and White chairman.

“My father, a Lehi [pre-state militant group] person, was a real ideologue. But at home we were taught that when an ideological rival makes a gesture of concession to you, then you must respond to him in the same tone. Like a real man. … This is a time of great distress in Israel, with the [coronavirus] plague and the economy. It is incumbent on us to express unity and gravity,” Shimon Riklin, an influential media figure on the right who is viewed as a close associate of Netanyahu, tweeted April 13. And he was not the only one.

Even journalist Yinon Magal, a right-wing media leader, turned to Netanyahu via Twitter and begged the prime minister not to be led astray by surveys that predict more than 40 mandates for him. He wrote, “Benny Gantz will emerge as the real man here, not you. Netanyahu, this is now your turn to prove that you did not lie when you called for ‘national responsibility.’ Don’t play with fire! Take the one bird in your hand and close the unity deal, for Israel, for sovereignty.”

Netanyahu is still very popular within the Likud, all shades of the right-wing public and the ultra-Orthodox. But his refusal to sign the unity agreement during Israel’s coronavirus crisis, out of personal motives, may very well turn out to be a double-edged sword. The descriptions given here demonstrate the beginnings of a negative mindset that is gaining momentum against Netanyahu, with his own supporters. This may turn into a veritable groundswell that can bring him down in the coming elections, if he ignores the warnings and voices.