The announcement likely refers to the F-35 Joint Strike Fighter. 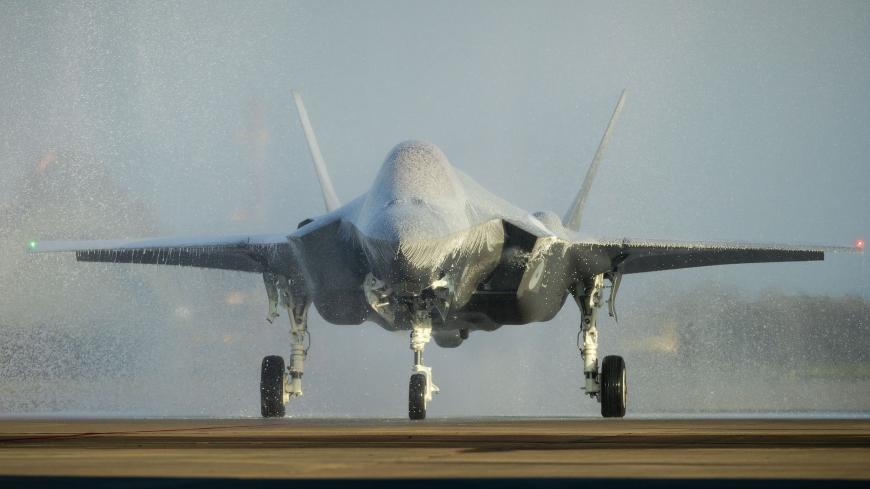 Israel’s government will not oppose the US sale of "certain weapons systems" — likely a reference to the F-35 — to the United Arab Emirates following an agreement signed by the US and Israeli defense chiefs at the Pentagon on Thursday.

Gantz returned to Israel on Friday after signing a declaration with Esper in Washington that the Israeli defense chief said would secure his country’s regional military superiority “for decades to come.”

Specific details of the agreement were not immediately clear, but it will “allow [Israel’s] procurement of advanced weapon systems that will significantly upgrade Israel’s military capabilities, maintain its security and its military advantage in the region as well as its qualitative military edge in the coming decades,” the statement said.

As a result, Netanyahu and Gantz’s offices said their government will not oppose the unspecified advanced US weapons sale to the UAE. The statement also said Gantz was told by US officials during his trip that the Trump administration would soon notify Congress of the potential sale to the UAE.

The US administration is moving forward with a proposal to sell the F-35 Joint Strike Fighter to Abu Dhabi, Trump told reporters at the White House on Friday.

Administration officials have said the UAE's agreement to recognize Israel paved the way for Abu Dhabi’s acquisition of the advanced fighter, which only a handful of US allies possess.

Reports of the potential arrangement raised controversy in Israel and led to heated questions in Congress. The US government is required by law to favor Israel's military advantage in the region when conducting arms transfers.

The Israeli announcement is likely aimed at reducing potential opposition in Congress, which must approve major US arms sales abroad.

The White House has led a last-minute push to convince Arab leaders to normalize ties with the Jewish state ahead of the 2020 US presidential election. President Trump said Sudan on Friday became the latest country to do so, after the UAE and Bahrain, though officials in Khartoum have not yet publicly announced a decision.

The Jerusalem Post cited a senior Israeli defense source as saying other countries in the region were likely to receive advanced US weapons. Reuters reported last month that Qatar had formally requested last month to buy the F-35.

A State Department spokesperson cited longstanding policy in declining to comment on potential foreign military sales of which Congress has not yet been notified.

One significant concern Israeli officials may have about the UAE receiving the F-35 is whether Abu Dhabi can keep the aircraft’s highly advanced electronic systems secure, according to Anthony Cordesman, senior analyst at the Center for Strategic and International Studies in Washington.

One way to offset those concerns could be for Washington to sell the F-35 with planned updates over time, Cordesman said. Still, it is not clear whether Pentagon officials have settled such matters with their Israeli counterparts.

Speaking at a think tank event in Washington on Tuesday, Esper suggested that the normalization deals could be a step toward shoring up regional countries’ security cooperation in line with US interests — a so far unrealized desire of the Trump administration.

“So many of the countries in the region recognize that the biggest concern they have, and we have, is Iran and its malign behavior through that region for four decades,” Esper said at an Atlantic Council event.

“The vision would be to have some type of security construct where countries on the [Arabian] Peninsula, Israel and others are working together to deter conflict with Iran,” Esper said.

“We orchestrate much of that now through CENTCOM,” he said, referring to the US Central Command. Esper also highlighted the potential economic benefits for countries establishing ties with Israel.

Any sort of solid regional alliance to counter Iran is likely a long way off. Nonetheless, “Normalization can establish a whole set of confidence-building measures,” including non-sensitive defense cooperation, Cordesman told Al-Monitor.

Such agreements “have the great advantage that you can often actually implement them," he said. “If it isn’t the perfect alliance, it may be a much better working arrangement.”