Despite difficulties in refugee camps, Yazidi students achieved the highest marks on the entrance exams to Iraqi universities. 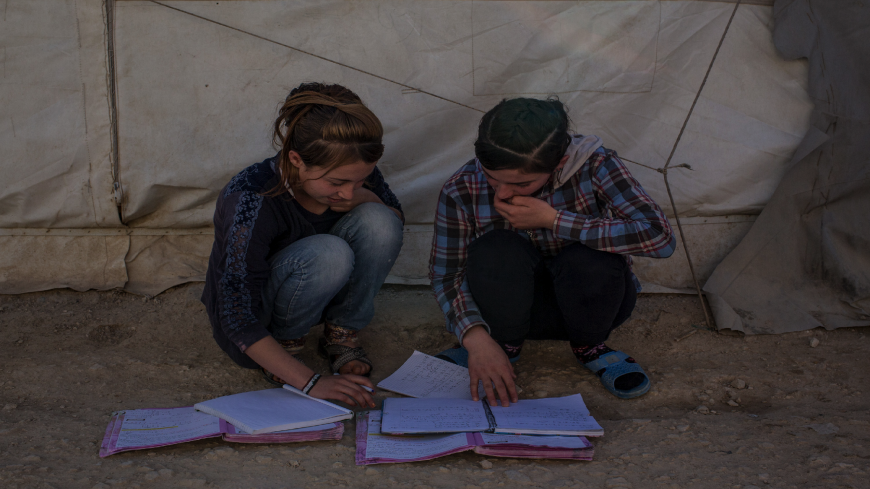 Two Yazidi girls do school work outside a tent at an IDP camp for Yazidis on Nov. 12, 2016, in Sharya, Iraq. - Chris McGrath/Getty Images

SINJAR, Iraq — Despite the unimaginable suffering of Yazidis in refugee camps, the results of the baccalaureate exams in Iraq, announced Oct. 7, showed that 25 Yazidis ranked among the top students, with grades qualifying them for medical and engineering schools.

Iraq’s Yazidis were subjected to genocide in their areas at the hands of the Islamic State (IS) in 2014, which caused them to flee the Kurdistan Region of Iraq and other neighboring areas and settle in refugee camps that lack basic necessities.

This has adversely affected several aspects of life for Yazidis, namely education, with the lack of a suitable environment for studying.

Qassim used to travel dozens of kilometers by car from the Qadia refugee camp for displaced Yazidis to her school in the Dahuk governorate.

She spoke of the many challenges she has faced during school, which did not stop her from achieving her dream of ranking first in the baccalaureate exams in Iraq.

Since the wave of displacement in 2014, Qassim has lived in a modest tent after having lost several members of her family. It was very challenging for her to study in these harsh conditions.

Elias, who lives in the Sharya refugee camp, faced the same hardships and challenges, but this did not stop him from ranking second behind Qassim — albeit only by a few points.

Elias talked about the shortcomings and limitations of the education sector, namely within the teaching staff and schools, not to mention the unstable situation with the ongoing crises and conflicts plaguing the Yazidi community in particular and Iraq in general.

He explained that there isn't adequate space set aside for education in refugee camps, and there is a shortage of textbooks and other educational supplies.

Education in Sinjar, which fell under IS control for over three years, faces many problems, most notably a shortage of teaching staff and lack of adequate buildings for schools, according to Mirza Dinnayi, director of the German-based Luftbrucke Irak (Air Bridge Iraq), which assists Yazidis with overcoming the genocide and developing their lives.

Dinnayi, a Yazidi, told Al-Monitor that the remote schools and long distances to travel to reach them — often via dirt roads and through different military checkpoints within the Sinjar district — constitute major obstacles for students. This has caused many students to drop out of schools, as they could not afford transportation fares to and from schools, camps and cities.

This is not to mention the high cost of dorms for the Yazidi students at schools and universities, most of which are located in the Kurdistan Region or the Ninevah governorate, which are still facing the dangers posed by armed groups and threats to Yazidis and other minorities.

Hassan Saeed Hassan, director of the planning department at the Sinjar Education Directorate, concurred with Dinnayi regarding the education challenges in the Yazidi areas, adding to that the problem of internet disruption, which caused many students to disregard online courses and instead continue to attend schools despite the health hazards posed by the coronavirus. Several camps do not have an internet connection at all.

Many Yazidi students have experienced being robbed, beaten or raped, while others had members of their families killed by IS. This wreaked havoc on their psyches.

“One of the major problems is also the lack of schools, which necessitates intensifying local and international efforts to restore existing schools and build new ones in the area,” Hassan told Al-Monitor.

Nadia Murad, an Iraqi Yazidi human rights activist and Nobel Peace Prize laureate, was held captive and then released by IS. She contributed to the rehabilitation and building of 12 schools in several towns in Sinjar. This was part of her initiative dubbed “Nadia,” which is ongoing.

The shortage of staff is another problem, according to Hassan. “In the Kabara town, for instance, there are some 60 students but no educational staff for administration or education. Therefore, no school can be opened there, which prompts students to attend schools in nearby villages,” he explained.

Dinnayi called on the Iraqi government to provide financial support to the outstanding students to help with their future educational pursuits and to offer scholarships in universities abroad and any other kind of educational support to help the Yazidi community recover from the major blow it has been dealt.