As Yazidis struggle to survive in displacement camps in Iraq, one community leader continues to help women survivors of the Islamic State genocide to resettle in Europe. 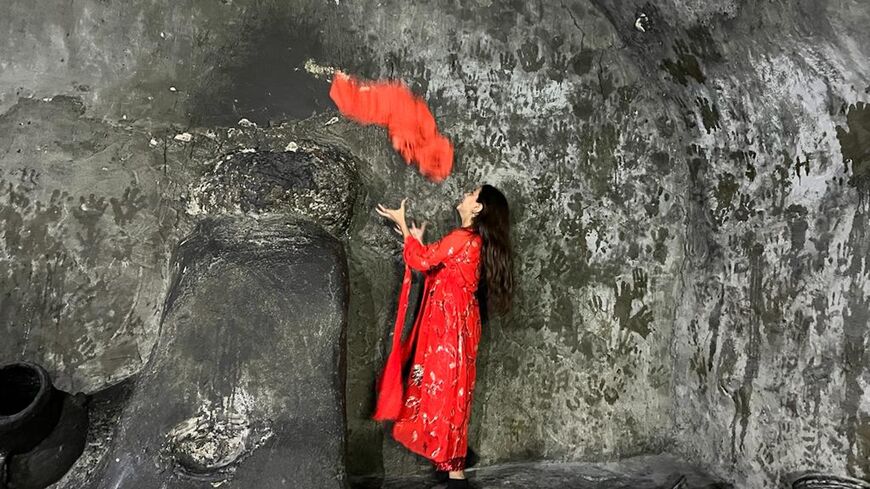 A Yazidi girl catches a scarf in a religious ritual at Lalish Temple in Dahuk, Iraqi Kurdistan, Nov. 17, 2022. - Amberin Zaman/Al-Monitor

DAHUK, Iraqi Kurdistan — In a barren roadside expanse under a clear winter sky, young boys dream of being the next Messi as they kick a soccer ball around. The girls beguile visitors, cupping their thumbs and index fingers to make heart signs and sharing their hopes of becoming doctors and lawyers one day. Yet there are few such prospects for these children at the Sharya camp for Yazidis, the ethnic Kurdish minority whose men were butchered and women and girls raped and enslaved by the Islamic State (IS) when it swept across their ancestral homeland of Sinjar in 2014.

Hazi, 13, says she has lived here with her six brothers and five sisters for eight years. “Life is very difficult,” she told Al-Monitor. “Our tents keep getting damaged. In summer it is like hell and in winter the tents are wet and cold."

"We are afraid Daesh will return,” chimed in Hayo, 12, using the Arabic language acronym for IS. She wants to be a dentist, she said.

At least 450,000 Yazidis were displaced, not counting those who were killed or kidnapped when IS unleashed its reign of terror in August 2014. More than 300,000 of them live in urban areas or in some 15 displacement camps in Iraqi Kurdistan’s Dahuk region amid the stench of open sewage and piles of rubbish. Water is scarce. Fires triggered by electrical short circuits or propane gas bottles used for cooking sweep through the flimsy tents.

With the world’s attention fixed on Ukraine, many feel abandoned. The United Nations stated in a May 2019 report that at least four individuals in the camps took their own life between January and April. Forty others had attempted or died by suicide the year before. The numbers were likely far higher but went unrecorded because they occurred outside the camps. This year a 16-year-old girl and a 19-year-old boy killed themselves at Shariya, a camp official told Al-Monitor, without giving any further details.

Employment is hard to come by in a region where discrimination against the Yazidis runs deep and tribal connections and patronage are key to finding jobs. Christians and Turkmens are granted quotas in government. The Yazidis are not, on the grounds that they are ethnic Kurds, and therefore do not fit minority status even though their ancient religion for which they have been savagely persecuted as “devil worshippers” is distinct from Islam.

“The main challenge that Yazidi survivors face is that they are living in protracted displacement. Many Yazidis live in camps unable to find work. There isn’t enough access to schools and they face extreme poverty,” said a nongovernmental organization (NGO) official who declined to be identified by name because of mounting pressure from the local government.

“Resources from the donor community are rapidly diminishing, so we are seeing services decrease. We are seeing NGOs funded through donors, through the UN wrapping up their programs. Services that women and children can access in the camp are severely limited now,” the official told Al-Monitor. 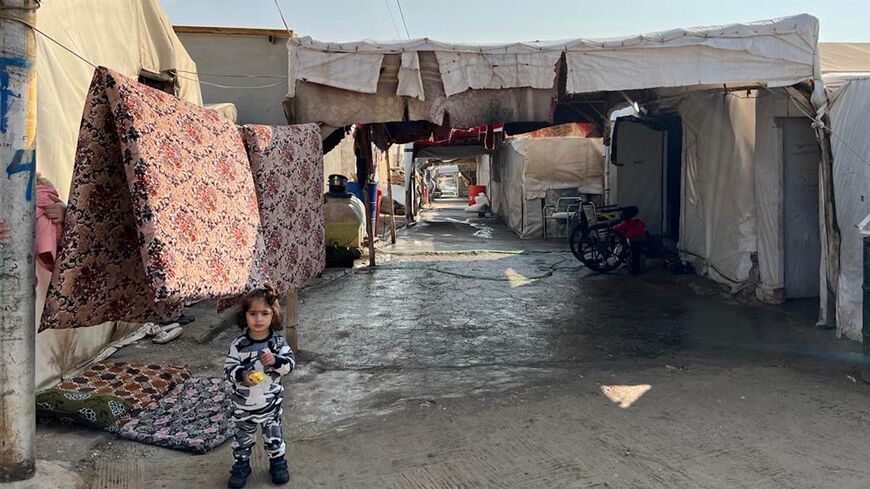 In this bleak environment, Jan Ilhan Kizilhan, a psychologist and trauma therapist, is doggedly seeking to heal his fellow Yazidis, and above all Yazidi women and girls who were exposed to sexual violence under IS captivity. A Yazidi Kurd who emigrated to Germany from Turkey, Kizilhan is the founder and dean of the Institute for Psychology and Psychotraumatology at the University of Dahuk. Established in 2016 and the first of its kind in Iraq, the institute is training a new crop of professionals to help victims cope with their pain. “Resilience, survival, these are instincts that are passed from one generation to the next. They are transmitted genetically,” Kizilhan told Al-Monitor. “This is why after being subjected to 74 genocides my people are still here.”

The team has conducted 25,000 therapy sessions since launching their services in 2017.

On a recent morning, Kizilhan and a handful of European mental health experts crammed into a tent at Sharya that Mohsen, a taxi driver, his wife and four daughters and son call home. Two of the girls were held by the jihadis for five years. The oldest of the pair is now 15. “I sometimes remember what happened,” she said before lapsing into silence.

“More than a hundred girls were taken from our village,” Mohsen said.

Nouri Khudur, a Yazidi, is among the first graduates from Kizilhan’s program. “She was in deep depression when I first began treating her,” Khudur said of the older girl. “She was suffering from PTSD, she had flashbacks, nightmares, sharp jabs of physical pain. She was always sad,” Khudur told Al-Monitor.

“My daughters are better now,” Mohsen said. Kizilhan smiled, visibly proud. The family has applied for asylum in Australia. Like thousands of Yazidis here, Mohsen sees no future for himself either in his native Sinjar or elsewhere in Iraq. “There are already 100 Yazidi families there; we want to go,” he said.

Strategically wedged between Iraq and Syria, Sinjar continues to be a major flashpoint.

Iranian-backed Shiite militias and a local Yazidi force known as the Shingal Resistance Units (YBS) are vying for control of the region, which the Kurdistan Regional Government (KRG) claims should be under its own rule. Turkey periodically rains bombs on Sinjar claiming the YBS is a front for the Kurdistan Workers Party (PKK) that has been waging an armed insurgency against the Turkish army since 1984.

“Our own home was destroyed by the Turkish military. There is nothing left for us to go back to,” Moshen said.

A deal struck between the central government in Baghdad and the KRG in 2020, which was meant to have resulted in the disbandment of all armed groups in Sinjar and the return of displaced Yazidis, has essentially failed, not least because the Yazidis themselves were never properly consulted.

The Turkish attacks prompted as many as 50,000 Yazidis who had resettled in Sinjar to return to the camps as of August this year, Kizilhan said. Turkey is demanding the PKK pull out of Sinjar. The militants deny their presence. Turkey, in turn, is continuing its attacks sowing terror and instability.

There is sympathy for the PKK among many Yazidis because they helped thousands of them to escape to the safety of Mount Sinjar as KRG peshmerga forces fled in fear of IS. The PKK helped to set up the all-Yazidi YBS force to defend their own people. But community leaders remain skeptical.

“The PKK is encouraging Yazidi girls to join them,” said Dasin Farouk Beg, the emir, or prince, of the Yazidis. “We believe there are as many as 800 of them now in Qandil and the PKK won’t let them leave,” Beg told Al-Monitor. He was referring to the PKK’s stronghold near the Iranian border. Al-Monitor was unable to independently verify that claim. 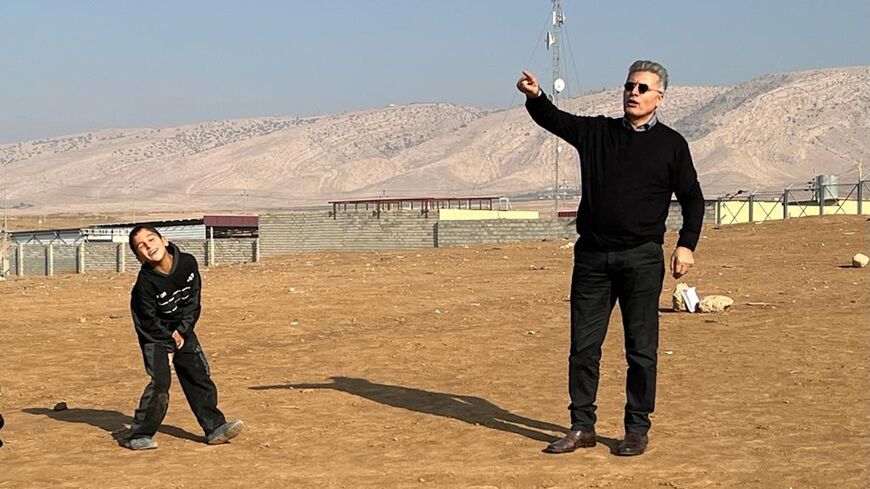 Unexhumed mass graves are another big obstacle. There are 800 of them across Sinjar and only 30 of them have been unearthed so far, according to Abid Shamdin. Shamdin is the executive director of Nadia’s Initiative, the NGO named after his wife Nadia Mourad, who survived IS captivity and was awarded the Nobel Peace Prize for her advocacy work.

“Many of these mass graves are left exposed and in the middle of villages, which is far too traumatizing for Yazidis to return to,” Shamdin wrote recently.

“Sinjar is the ancestral homeland for the Yazidis, the very place that protected them for hundreds of years and sheltered them through so many genocides,” said Murad Ismail, founder of Sinjar Academy, an advocacy group. “But a return to a Sinjar that is unsafe or deprived of basic needs is even worse than camps,” Ismail told Al-Monitor.

Kizilhan believes that if the status quo persists, the Yazidis will have no other choice but to leave Iraq en masse. “If our people cannot return to Sinjar, our collective identity will cease to exist as it already has in Turkey. We will be extinct,” he said.

Kizilhan offers a radical solution, noting, “We need to start a debate on creating a new community outside of the Middle East. It may be our last chance.”

Kizilhan already took matters into his own hands when he convinced the German government in 2015 to take in 1,100 of the worst scarred women and children. They arrived in Germany in two separate batches in early 2016. Kizilhan believes these women are going to be trailblazers of a new and empowered Yazidi community living in a democratic society where they will be seen as equals — at least before the law.

Last year, the Iraqi parliament passed a Yazidi survivors’ law that provides a reparations framework for survivors of IS crimes, including women and girls who were subjected to sexual violence, as well as children who were abducted before the age of 18. These include a monthly stipend, providing a plot of land or other accommodation and educational and therapy services to survivors. The move was widely welcomed as a first and necessary step. But more than a year on, “the benefits to survivors have not materialized yet,” the NGO official said. Moreover, children who were born to Yazidi women in captivity were not addressed in the law.

The issue of women who bore children with their IS captors is highly sensitive. Despite Kizilhan’s entreaties, the top spiritual leader of the Yazidis, known as Baba Sheikh, refuses to accept the children as conversion is not permitted in the Yazidi faith. Many therefore left their children behind while others, thought to be in the hundreds, remain in the violence wracked al-Hol detention camp in northeast Syria where the families of IS fighters are interned. 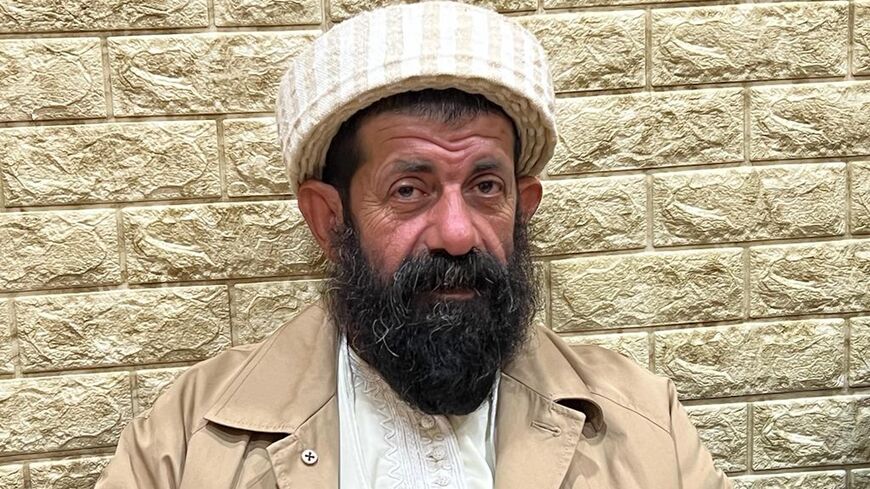 In an interview with Al-Monitor, the guardian of Lalish, the Yazidis’ ancient temple, sounded weary as he bemoaned the exodus of his flock. Baba Chavush as he is known, said, “I am very sad that my people are leaving.” Anger crept into his voice, however, when queried about the harsh approach espoused toward the offspring of Yazidi captives. Conversion is “impossible,” Baba Chavush asserted. “Nobody should harm these children. But why are we not talking about the 3,000 Yazidi girls who are still missing?” he asked. He was alluding to the 3,000 plus Yazidi girls taken by IS who remain unaccounted for.

Kizilhan’s new plan is to resettle Yazidi girls and there jihadi offspring in Germany. As he walked out of Mohsen’s tent his cellphone rang. He answered and within seconds his face lit up. The government in Baden-Wurttemberg that has been sponsoring his work with the Yazidis had said it would help resettle 200 more girls and their children in Germany. “This is a great day,” Kizilhan said.