The number of suicides among Iraqi Yazidis have been increasing recently, while they receive little support from local and international organizations in this regard. 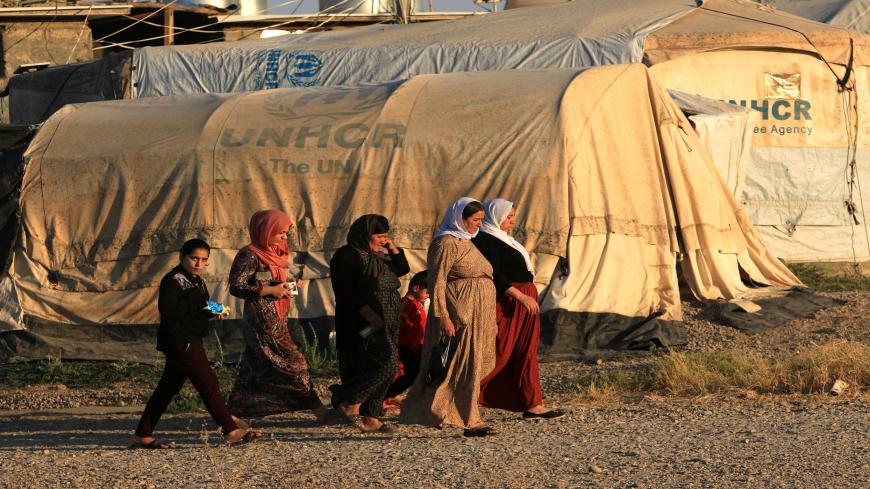 Displaced Iraqi women from the minority Yazidi sect, who fled the Iraqi town of Sinjar, walk at Khanki camp on the outskirts of Dahuk province, Iraq, July 31, 2019. - REUTERS/Ari Jalal

DAHUK, Iraq — On the morning of March 9, Samir Hassan Ali left his tent in Khanke camp, a displacement camp for Yazidis near the city of Dahuk. Samir, who worked as a volunteer teacher at a school near the camp, always came back home right after work, but not that day. When his relatives saw his tent was still empty late afternoon, they called the police. It didn’t take them long to find his phone and wallet, next to the lake in Khanke. The next day, divers found his body in the water.

It is unclear why Samir, who was loved for his optimistic character and was a popular teacher, committed suicide. His brother Haji thinks it has to do with the hopeless situation Samir found himself in. “Although Samir graduated from the physics department at the University of Mosul in 2013, he had never found a job in his field. To fill his days, he did a lot of volunteer work as a teacher," Haji said. “We have been living in a tent for almost six years. Our family is very poor."

Like many Yazidis, Samir’s family lost everything when the Islamic State (IS) attacked Sinjar in 2014. Thousands of men were murdered, 6,470 women and children were kidnapped and sold as slaves in markets in what was described by the United Nations as an "ongoing genocide" against the Yazidi minority. Almost the entire Yazidi population fled to the Kurdish region, where they ended up in displacement camps. Almost six years after IS attacked Sinjar, 360,000 of the once 550,000 Yazidis in Iraq remain internally displaced.

In addition to trauma, desperation is one of the reasons suicide rates among the Yazidis is alarmingly high, said Firaz Suleiman, a Yazidi psychologist. “People have been living in tents or in unfinished buildings for almost six years now as they cannot return to their homes in Sinjar. Many of them are depressed," he said. “Two weeks ago, a woman committed suicide in Kabarto camp, and after that I heard about another case in Germany. Basically, you hear about a case every month, sometimes even three. It is a very big problem."

As a psychologist working for an international nongovernmental organization in the outskirts of Sharya camp, Suleiman has treated many members from the Yazidi community. From the 635 cases who receive mental health care outside the camps, 120 individuals planned or attempted to commit suicide, he said. He estimates that 10% of the Yazidi internally displaced persons (IDPs) living in Sharya are thinking about ending their lives. “But we don’t have any numbers on the total number of suicides as the Health Department doesn’t keep track due to privacy laws, and because the numbers have to come from aid organizations that are often working here temporarily,’’ Suleiman said.

Many suicide cases go unreported due to the stigma, he added. People feel ashamed to talk about their problems with a psychologist, especially men. Even if they want to receive specialized psychological and psychiatric treatment, there are not enough specialists to treat them.

“My sister Rasha got some form of psychotherapy for a few weeks, but it was not enough — she killed herself at the age of 18,’’ said her sister Delberin Khudeda, adding that many of her family members have suffered from mental health illness ever since they fled Sinjar in 2014. “It mostly had to do with the fact that she missed my brother so much; he was kidnapped by IS. But she also did not have any faith in the future as we were living in tents for years. She was crying all the time."

Although the authorities have no official statistics on the total number of suicides, Yazidi activists and doctors believe that the numbers have increased in recent months. The majority are young women and girls who in most cases where enslaved by IS. But there also is an increase among young Yazidi men, the various sources told Al-Monitor.

On Jan. 24, Anwar Khdir committed suicide by hanging himself in his tent. The 21-year-old student had been living in a displacement camp with his mother, four brothers and five sisters ever since IS conquered Sinjar in 2014. His father was killed during that attack. According to community members, Anwar could not handle the pressure of being the sole breadwinner for his family. “Never ask for the reason of my suicide. Please do not cry, mom,” Anwar wrote in a farewell letter to his mother.

Mirza Dinnayi, a Yazidi activist and head of Luftbrucke Irak, believes that the lack of prospects and poverty are the main reasons for the increasing suicide rates among men. “Like in most oriental communities, Yazidi men are responsible for taking care of their families financially. But how are you going to manage that when there are no jobs? The unemployment rate is extremely high in Iraq, especially among IDPs," he said.

Dinnayi said that inside the camps poverty is on the rise. He added, “Many families don’t even have money to buy dinner. The men feel confused and guilty."

Organizations working on behalf of minorities fear that the coronavirus pandemic will affect the displaced communities across the country, including Sinjar. Between April and August 2019, 24 patients who were brought to the emergency room of Sinuni’s hospital had attempted suicide — six of whom died before arrival at the hospital or could not be saved, Medecins Sans Frontieres reported. The youngest victim was a 13-year-old girl who had hung herself; some even set themselves on fire.

“These already traumatized communities now face restrictions of movement that will exacerbate underlying psychological distress that may lead to increased suicide rates," the organization wrote in a joined statement released on April 16, that was signed by organizations such as Yazda, the Iraqi Christian Relief Council and Jiyan Foundation for Human Rights.

According to Khalil Khalaf Daly, a general practitioner at Yazda and at the hospital in Sinuni, the number of suicides in Sinjar has already increased after the government imposed restrictions of movement and home quarantine. “Most of them are young women who suffered from trauma caused by the genocide," he said. “But there are also cases where domestic violence or honor issues within the family play a role. Staying at home due to the coronavirus outbreak most likely will make their situation worse. Tensions will rise when you are confined at home."

To reduce the suicide rates and tackle other serious mental health problems among Yazidi IDPs, many measures must be taken, Daly noted. “First you have to make sure Yazidis can finally leave the camps and return to their homeland in Sinjar. Therefore, you need to provide security, stability and basic services such as water and electricity to the region. We need more government hospitals, schools and job opportunities."

In Sinjar region, there are currently only two hospitals and just one ventilator for a population of around 160,000 people. However, it is not the only reason why Yazidis are reluctant to return to their homes. Most of the area was destroyed and never rebuilt after the defeat of IS, and the region is currently run by different factions.

“The different parties distinguish among people," he added. "Some people get jobs and salaries from one of the parties, even though others are more qualified than those chosen. They are left without rights."