Iraqi minorities are afraid that rising tensions between Iran and the United States might end the US troop presence in the country. 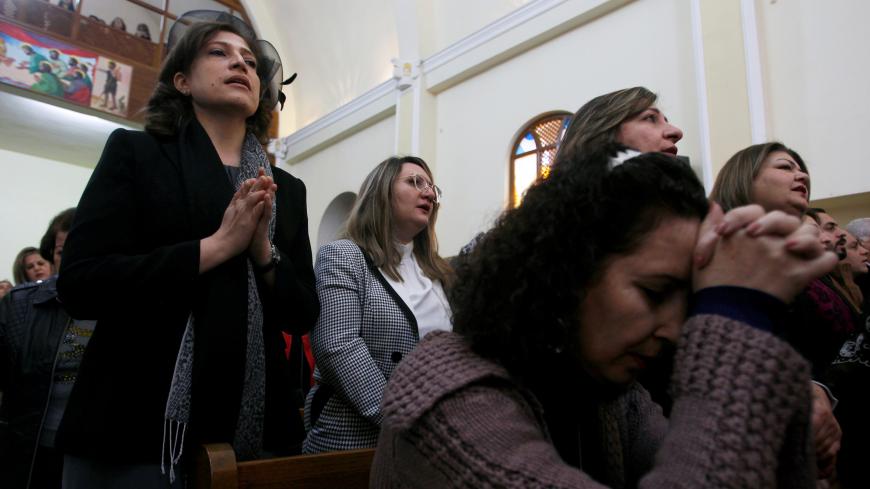 BAGHDAD — Members of various religious minorities in Iraq say they are worried that a possible US troop withdrawal could negatively affect the future diversity of the country.

Yazidis and Christians said they are especially concerned. In the wake of the victory over the Islamic State (IS), Yazidi and Christian demands were a top priority for the Iraqi government and were often taken on by the international community and the UN Assistance Mission for Iraq. However, these demands no longer command the same level of public and official interest.

Representatives of minorities were unhappy with the Jan. 5 parliamentary vote for the United States to withdraw dismissed the opinions of minorities, including Sunnis and Kurds, seeing it as a Shiite monopolization of national decision-making.

These representatives say disputes between various powerful groups will likely mean that the minorities will see their territorial bases shrink, perhaps drastically; this may be particularly the case in Sinjar and the Ninevah Valley, where the central government and the Kurdistan Regional Government are fighting for influence. There also is the matter of Turkish and Iranian interventions in Iraq. Meanwhile, the US-Iranian conflict is raging, much of it along the Iraqi-Syrian border, even though Iranian Maj. Gen. Qasem Soleimani was killed by a US drone at the Baghdad airport and US bases away from the border have been targeted.

Amid the hubbub surrounding a US withdrawal, there is lack of trust in the Iraqi government. Shiites constitute the largest political grouping in the country, and Shiite elites have stuck with the militias of the Popular Mobilization Units, which often have been in competition with other sectors of society.

Iraqi minorities, because they have a weak demographic weight and limited powers of self-protection, have resorted to the international community — and notably to the United States — as an alternative to the absence or ineffectiveness of the state.

Murad Ismail, executive director of the Yazda organization, said Yazidis “support Iraq’s independence and its firm sovereignty over its territories, but practically, we need international support in the post-IS phase.”

Ismail appeared alongside US President Donald Trump when Trump signed the Iraq and Syria Genocide Relief and Accountability Act, which offered support to religious minority victims in Iraq and Syria who suffered due to the IS genocide, acts against humanity and crimes of war.

Ismail said, “We need billions of dollars to rebuild the infrastructure in the destroyed areas of minorities and to provide essential services. Without international support, we cannot build a hospital to serve thousands of citizens, as we would like. If Iraq faces the same fate as Iran in the sanctions, this would be the end of our existence, and we would not find any hope to remain in Iraq or return to it.” Trump has threatened severe sanctions against Iraq if US troops are made to withdraw.

Minorities fear that if US troops leave the country and national security institutions are unable to control the chaos, IS might make a strong return and commit new genocides, and other terrorist groups in Syria and Iraq might join the fray.

Since stability and the return of the displaced are key demands for groups such as Christians in the Ninevah Valley and for Yazidis in Sinjar, minorities want a continued US presence for security, military and other reasons.

Mirza Dinnayi, head of Luftbrucke Irak (Air Bridge Iraq), said, “A deep conflict is raging on the lands of minorities, especially in Sinjar, which is a strategic location to control the borders with Syria. As regional powers, Iran and Turkey are fighting over influence in the region. Amid the weakness of the Iraqi government and the extent of regional intervention, the international presence remains the best option for minorities.”

Mona Yako, who teaches constitutional law at Salahuddin University in Erbil, said any observer could see that the situation in Iraq is worrisome, involving as it does security disorder, the ongoing protests and the government 's resignation, among other issues. Declaring the military eradication of IS did not reduce fears that IS sleeper cells could redeploy. Under such a development, minorities likely would be the first victims, as occurred in the Sinjar genocide of the summer of 2014.

Yako said, “The situation of Christians is delicate, and their existence on their historical lands is threatened due to ongoing migration. Any security vacuum would multiply the number of migrants and lead to negative effects related to a reduced Christian presence.”

Although Iraqi citizens and minorities generally seek a stable society and a sovereign state — the main demand of the public protests that took off more than three months ago — ongoing support from a major power with international weight such as the United States remains key for minorities. The United States espouses democratic ideas and human rights’ protection; Yako said minorities see this as a guarantee in case their rights are violated.